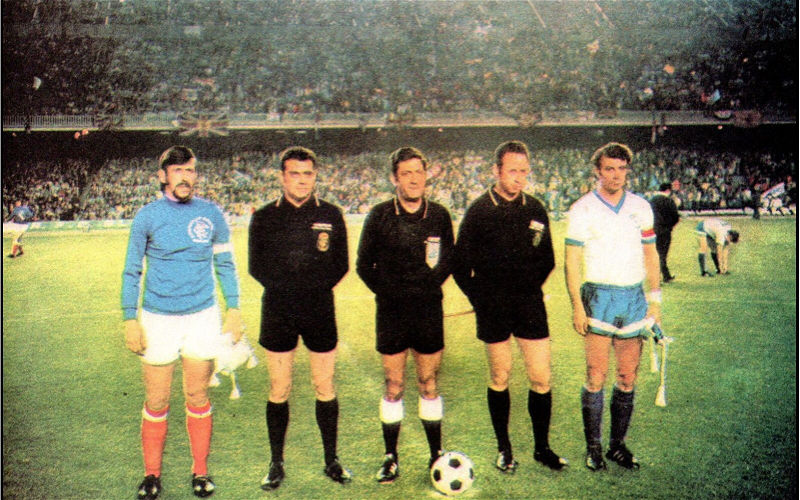 One of the stories I have picked up over the years was that on our way to glory in Barcelona in 1972 each of the teams we played in the competition were, at the time we played them, top of their domestic league championships.  I mentioned this recently to Alistair Aird.  And Alistair being Alistair, set out to investigate. 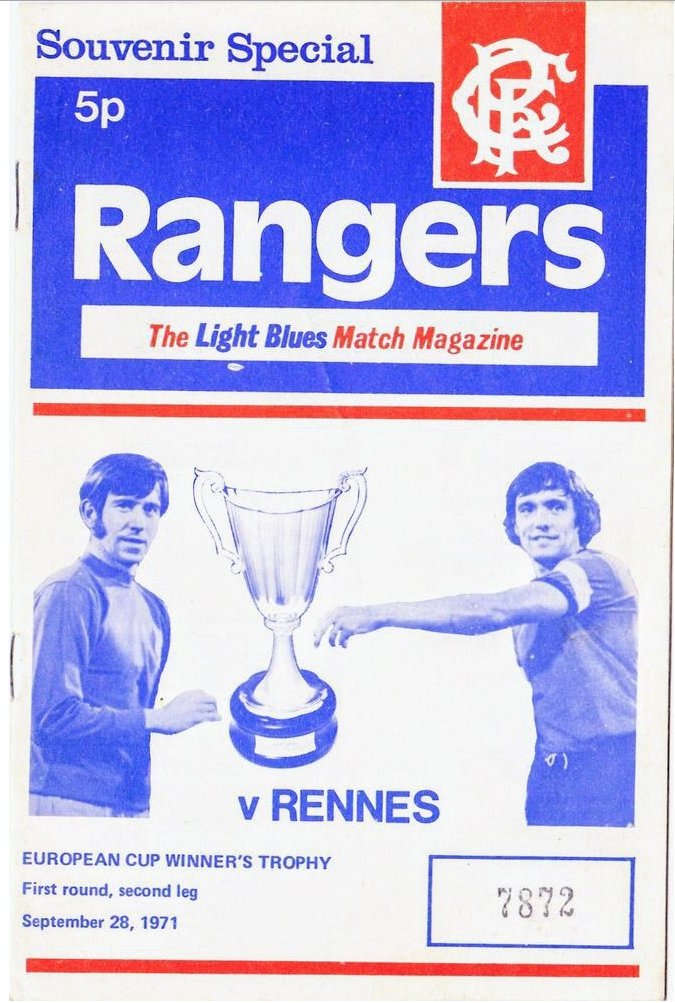 Rangers went into the first leg second bottom of the Scottish First Division having lost their opening two league games. They had also exited the League Cup, heavy home and away defeats to Celtic proving their undoing.

And it was Jock Stein’s side they had lost against just four days before they travelled to France. After losing 3-2 at Firhill in the opening league game, Rangers succumbed to the same scoreline when Celtic came to Ibrox for the third time inside five weeks (Parkhead was in the throes of reconstruction, so Ibrox was the venue for both League Cup ties).

Rangers were well beaten in the League Cup matches – 2-0 and 3-0 – but there was a sense of injustice about the league match. Lou Macari headed the visitors ahead inside the opening 10 minutes, but a penalty from Willie Johnston – Jim Brogan was penalised for handling – and a strike from Colin Stein had Rangers ahead at the interval.

Kenny Dalglish restored parity ten minutes into the second half, but Rangers suffered a double blow shortly afterwards. Firstly, Alfie Conn was ordered off – having been booked in the first half, he was cautioned again for a foul on Tommy Callaghan – then Colin Stein looked to have had a legitimate goal ruled out. The referee, Mr J.W. Paterson from Bothwell, deemed that the boot of Stein – chest-high when he challenged the Celtic goalkeeper, Evan Williams – constituted dangerous play.

A draw looked to be on the cards after that, but the diminutive Jimmy Johnstone outjumped the Rangers defence to head the winner in the final minute.

In contrast, Stade Rennes had beaten Bordeuax 2-0 – Sorkat Mojsov and Philippe Terrier scored the goals – and after six matches, they were third in the Ligue 1 table, a point adrift of leaders, Marseille. Rennes had nine points thanks to four wins and one draw in those opening matches.

By the time of the return leg thirteen days later, Rangers had elevated themselves to fourteenth in the 18-team First Division table. A 3-0 win at Brockville – John Greig scored twice – had got some points on the board, but three days before Rennes came to Glasgow, Aberdeen had come to Ibrox and won 2-0. Steve Murray and Joe Harper netted for the Dons.

Meanwhile, in France, Rennes beat AS Nancy 3-1. Andre Betta scored two of the goals, with Hector Toublanc scoring the third with five minutes to go. Rennes were now second in Ligue 1, two points behind Marseille. 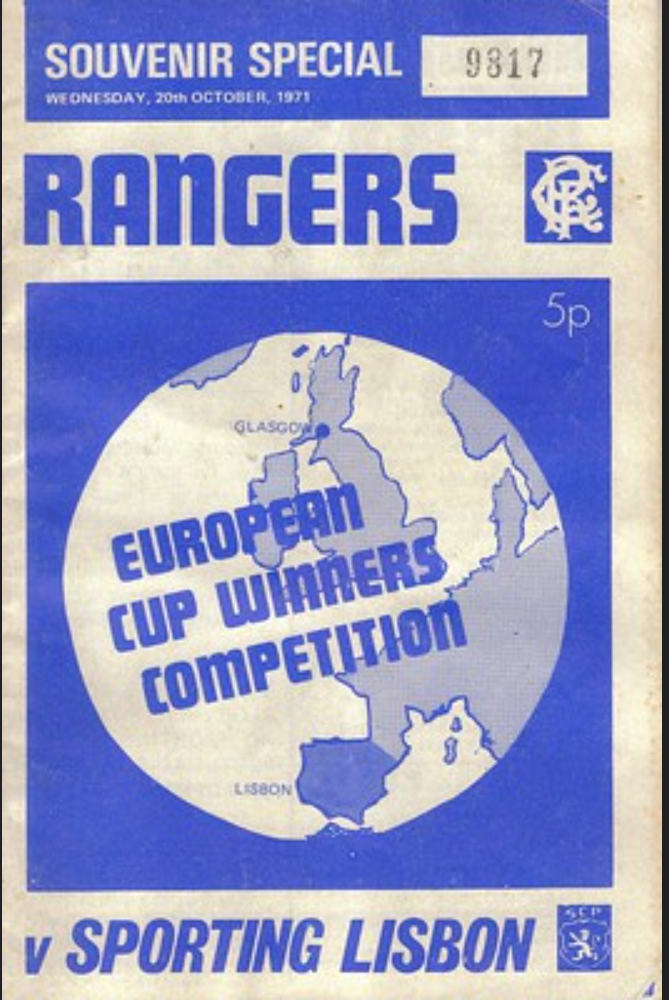 By the time Sporting Lisbon came to Glasgow on 20 October 1971, Rangers had steadied the listing ship. After losing 2-1 at Tynecastle to make it four defeats in the first five league games, a 3-0 home win over East Fife and a thumping 5-1 victory at Tannadice had pushed Willie Waddell’s side up to ninth.

Three days before travelling to Glasgow, Sporting, who had beaten Lyn Oslo 7-0 on aggregate in the opening round of the Cup Winners’ Cup, made it five wins out of five in the Primeira Divisão with a narrow 1-0 win over Academica at home. They were top of the table, a point clear of Benfica.

However, by the time the teams faced each other in Lisbon, Sporting had been toppled from the top. A 2-1 win away to Guimarães had made it six wins in a row, but Benfica supplanted them when Sporting lost 2-1 at Belenenses the weekend before hosting Rangers.

For their part, Rangers had followed the 3-2 win over Sporting in the first leg with home wins over Motherwell (4-0) and Kilmarnock (3-1) to rise to seventh spot in the First Division. Waddell’s side were, however, seven points behind early leaders, Aberdeen. 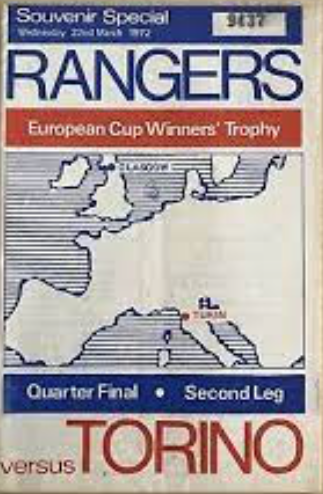 It would be 8 March before European action returned. In the interim, Rangers had won 13 of the 17 league matches played, including a 6-0 win over Hearts that featured a hat-trick from Derek Johnstone. That had propelled them up to third in the table, nine points behind leaders, Celtic, and four adrift of second-placed, Aberdeen.

Last eight opponents Torino had played 20 matches in Serie A before Rangers went to Turin. Their last league match had been on 27 February at home to Inter Milan. A 2-1 win had moved Torino up to third in the Serie A standings, two points behind leaders, Juventus.

Prior to the second leg, Rangers drew 2-2 against Motherwell at Fir Park in the quarter-finals of the Scottish Cup. Waddell’s side had lost 2-0 there in the league a month earlier, and another loss looked to be on the cards when the home side led 2-1 with just seven minutes remaining. Alex MacDonald’s left-foot shot had Rangers ahead at half-time, but the match was turned on its head when Brian Heron and Billy Campbell scored. However, a typical ‘hoof’ up the park from Peter McCloy caused sufficient consternation in the Motherwell defence to allow Colin Stein to force a replay at Ibrox.

As far as Torino were concerned, they lost 2-1 in Genoa against Sampdoria, but beat Fiorentina 2-1 at home to leapfrog AC Milan and take second place in Serie A. They trailed Juventus by three points, although that gap would be cut to just a single point four days after Rangers knocked Torino out of the Cup Winners’ Cup, the Turin side defeating Lo Bianconerri 2-1. 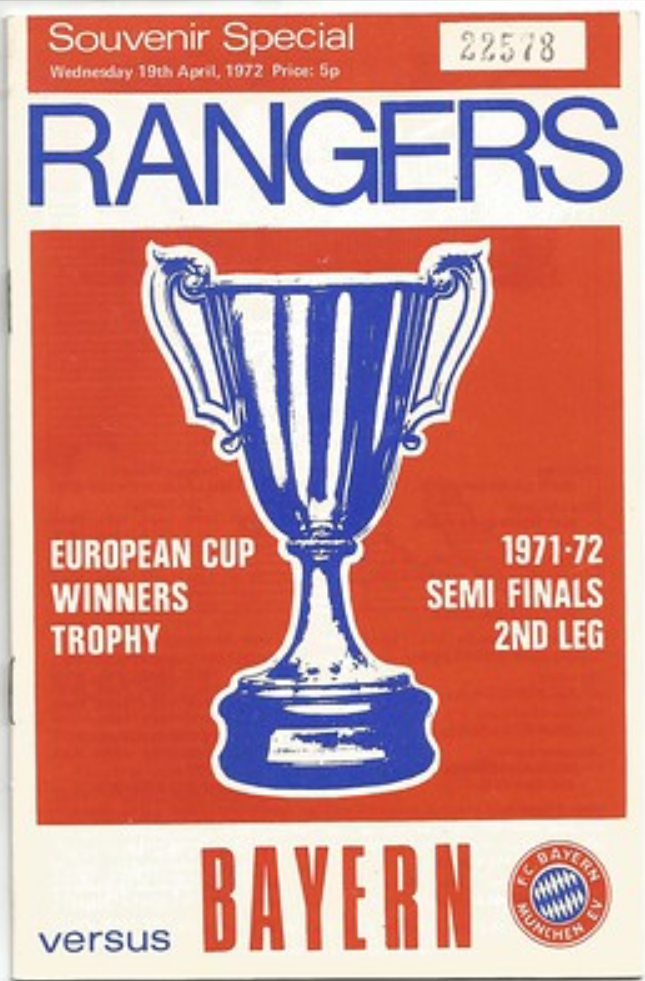 Bayern, who had beaten Bill Shankly’s Liverpool en-route to the last four of the Cup Winners’ Cup, were in a Teutonic battle with Schalke at the top of the Bundesliga when Rangers went to Munich in April 1972. In their last league match before the first leg, they had beaten VFB Stuttgart 4-1 away from home, the prolific Gerd Muller scoring twice. The Bavarians led the race for the title, the gap at the top of the table a single point. It should also be mentioned, however, that three days prior to the win over Stuttgart, Bayern had lost heavily in the German Cup (DFB-Polka), going down 5-1 in Cologne to exit the competition 5-4 on aggregate.

Rangers went into the match still sitting third in the First Division. Waddell’s side had beaten Motherwell in the Scottish Cup replay but had lost 2-1 at home to Morton in the league. That was on 25 March. They were scheduled to play Ayr United at Ibrox on 1 April, four days before the Bayern tie, but heavy rain resulted in a waterlogged pitch and a postponement.

Prior to the second leg, it was status quo in Scotland and West Germany. Since the 1-1 draw in the first leg of the semi-final, Bayern had battered Werder Bremen 6-2 and Hannover 3-1 – the latter match featuring a goal from Franz Roth who had netted the extra-time winner in the 1967 Cup Winners’ Cup Final. Those victories kept them ahead of Schalke at the top of the table.

For Rangers, their rotten league form continued. Three days after the draw in Munich, they were fortunate to pick up a point in a 1-1 draw against Clyde at Shawfield, and two days later, two goals inside three minutes early in the second half earned Dundee a 2-0 win at Dens Park. The results meant that Waddell’s side had now slipped 13 points behind Celtic.

Solace was sought in the Scottish Cup, but another fixture was added to the list when Rangers and Hibernian fought out a 1-1 draw in the semi-final at Hampden four days before the second leg of the Bayern tie. 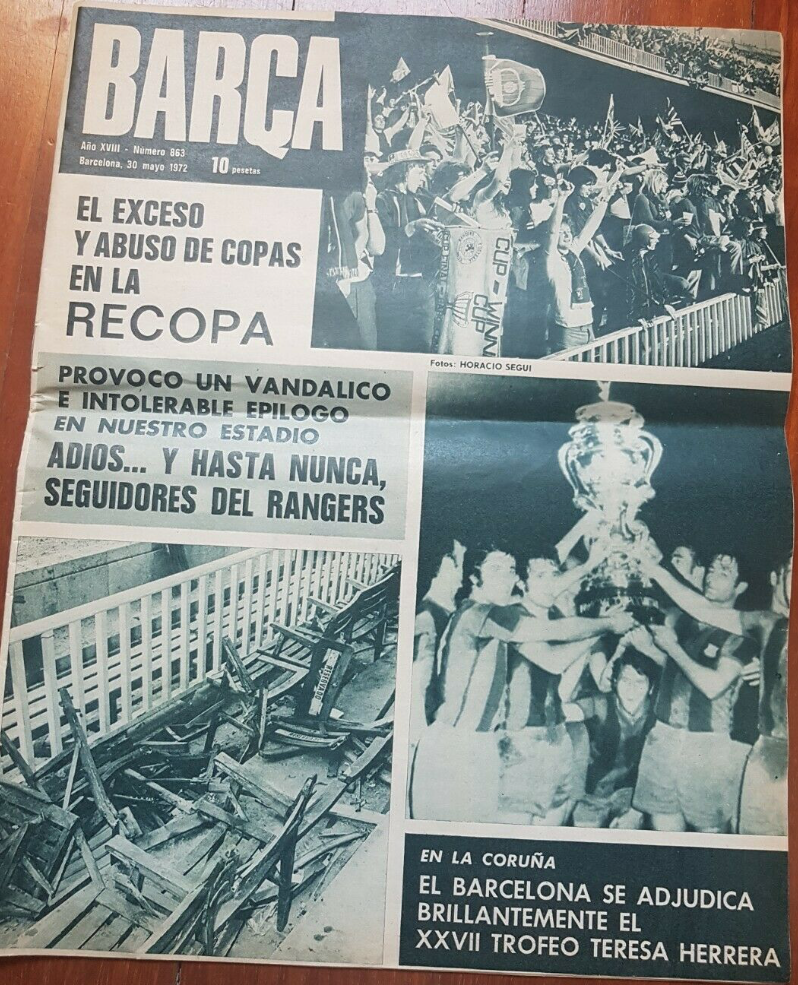 The top league in USSR (Vysshaya Liga) ran from April to November. Thus, the 1972 season had only started some six weeks before the Final in Barcelona.

Dynamo Moscow had played six league matches, winning two, drawing two and losing two. Their last league fixture before the Final was a 1-1 draw at home against Kairat Almaty. That result left them eighth in the table, seven points behind leaders Zarya Voroshilovgrad with a game in hand.

Rangers had ended the domestic season with a set of results that summed up their season at home. They won two and lost two of their last four league matches – the home defeats against Dunfermline (3-4) and Hibernian (1-2) being their fifth and sixth defeats at Ibrox in the league – and lost out to the Easter Road side in the Scottish Cup semi-final replay. Waddell’s side finished in third place on 44 points. Celtic ended up with 60 points, while runners-up Aberdeen had 50. Rangers’ third-placed finish was secured on goal average.