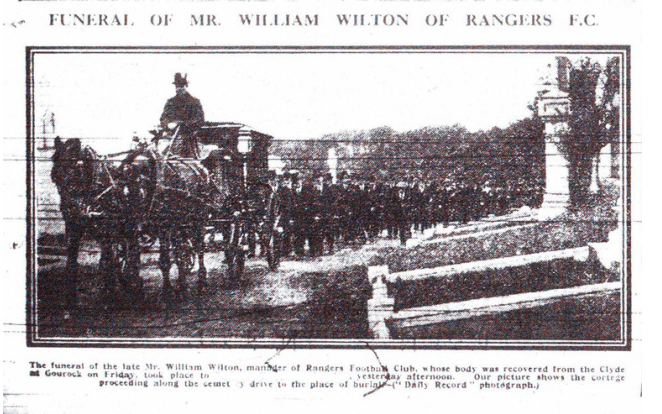 We are very grateful to FF user Flootbon for his work in transcribing newspaper reports of the time.

Below is the reporting of William Wilton death and funeral from the Glasgow Herald. The 99th anniversary of William’s funeral (29 June 1920), recently passed and I thought an article about this would be appropriate, to say the least.

The articles from the Herald are almost exact (I might have made a typo) and surprising have little punctuation. The Herald also uses the names Rangers Club, Rangers Football Club and Glasgow Rangers! 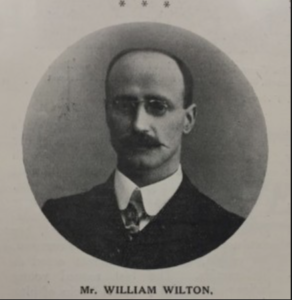 Mr William Wilton JP secretary and manager of Rangers Football Club, was drowned off the coast of Gourock Pier in the early hours of Sunday morning as a result of a yachting accident. Along with Mr Joseph Buchanan one of Rangers’ directors, Mr Wilton was spending the week as the guest of Mr James Mair CA Glasgow, on board the latter’s auxiliary yacht Caltha, 19 tons Thames measurement, and there were also on board the skipper and mate, making a party of five.

On Saturday night the yawl was moored to a buoy in Cardwell Bay. Shortly before midnight an easterly gale sprang up, which increased in violence, and between two and three in the morning the yacht broke free from her moorings and was driven against Gourock Pier. The party of five were in their bunks at the time, and the first they knew of their dangerous position was when the yacht dashed against the pier.

On going on deck they found the situation a very alarming one as the yacht was in danger of breaking up as a result of the heavy seas battering her against the piles. It was decided to make an attempt to get ashore by climbing the mast and leaping onto the pier when the sea swung the mast inwards. This was successfully accomplished by all except Mr Wilton.

When Mr Wilton’s turn came to make the attempt a rope was thrown to his assistance and holding by the rope with one hand and retaining his grip on the mast he managed to get his knee onto the pier when the yacht swung outwards. Again he tried and succeeded to get his knee onto the pier wall. Willing hands were stretched out to help him when he suddenly lost his hold on the mast and rope and fell into the sea.

He was heard crying out and Mr Mair dived into the water. He was able to get hold of Mr Wilton but unfortunately due to the heavy sea running he was unable to retain his hold and Mr Wilton disappeared and was not seen or heard again.

Later in the morning the yacht, which had been badly battered, but still remained afloat was secured by the employees of Provost Adam yacht builder and again moored in Cardwell Bay where it was the object of melancholy interest during the day.

Dragging operations were carried out under the supervision of Mr Adam brother of Provost Adam, but no trace of Mr Wilton’s body was found.

Mr Wilton was a Glasgow man and had been associated with the Rangers from his earliest years. He played in the Rangers Swifts the second team of the club, and acted as secretary of the eleven when Mr Gossland filled the like office in the first team.

After his playing days were over Mr Wilton joined the committee of the Rangers Club and became also League representative and secretary. He was one of the principal founders of the league and his services to that body were highly appreciated. His administrative abilities found further scope in the work he did as a member of the council of the Scottish Football Association.

When the Rangers Club was formed into a limited liability company Mr Wilton severed his connection with the firm of Messrs Mirrlees, Watson, and Yarnan and Co. and at the same time resigned the secretaryship of the League in order that he might devote all his energies to the interests of the Rangers Football Club (Limited).

To the responsibilities of manager Mr wilton brought the qualities that were required to maintain the high standing of the club and its very successful career is a tribute to the way in which he guided its affairs. The darkest hour in the history of the club was when Ibrox park was the scene of disaster in 1902 during the International match between Scotland and England.

Mr Wilton instituted the Rangers fund on behalf of the sufferers and largely through his efforts and those of his colleagues the fund realised £4,000. Mr Wilton has passed away in the prime of life after over 20 years service as manager of Rangers. To the members of the club his death will bring a sense of personal bereavement. It is a loss not only to Scottish Football but to the game.

Sir John Ure Primrose Bart the president of the Rangers Football Club informed one of our representatives he was stunned when he learned yesterday of Mr Wilton’s tragic death. Mr Wilton was in Sir John’s company on Saturday on Saturday evening immediately prior to his departure to Gourock to join his friends in the yacht. He confessed that he was feeling fatigued with the seasons’ heavy work and welcomed the prospect of inhaling the sea air in the Firth. Having parted with Mr Wilton under these circumstances, Sir John was naturally greatly shocked at the news of the tragedy. He regarded Mr Wilton as a “prince among football mangers” a maan who strove at all times to keep the game of football free of blemish. The club, which he managed, is one of the most popular in the United Kingdom and its record during Mr Wilton’s management reflects the attention and influence, which he exercised over it. During the war Mr Wilton devoted himself with energy to the task of making pleasant the hospital life of the soldiers who were patients at Bellahouston Hospital. His work there in organising concerts and entertainment was greatly appreciated by the soldiers and by the staff.

WILTON – Funeral of the late William Wilton (Rangers FC) to Cathcart Cemetery, tomorrow (Monday). Friends are desired to meet the cortège at the cemetery at 3.15pm. 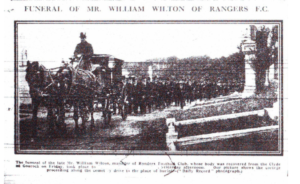 The funeral took place yesterday of Mr William Wilton, secretary and manager of Glasgow Rangers Football Club, whose death occurred under tragic circumstances at Gourock two months ago. It may be recalled that Mr Wilton was one of a yachting party and in attempting to land at the pier head during a heavy storm he was drowned.

The body was recovered at the end of last week, and the remains were brought by train from Gourock, and at the Central Station, Glasgow, relatives of the family and directors of the Rangers Football Club were in attendance.

The place of internment was Cathcart Cemetery, and a large number who joined the cortège included members and players and officials of the Rangers and other football and athletic clubs and well-known patrons of the game.

There were numerous floral tributes. The service at the graveside was conducted by the Rev W White Anderson.