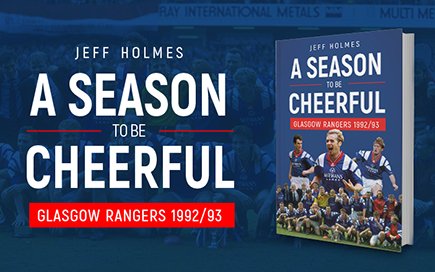 As a special treat to FF readers Pitch Publications have arranged to make the first chapter a free to read download for us! – http://www.pitchpublishing.co.uk/content/light-blue-heaven

1992/93: It was the season to be cheerful, especially if you were a Rangers fan. Walter Smith assembled a squad crammed full of courage, and no shortage of skill. A combination of both qualities would see the Light Blues complete arguably the finest season in the club’s long and illustrious history.

The Treble of Premier League, Scottish Cup and League Cup was secured – and a 44-game unbeaten run meant Rangers ruled the roost in Scotland. But it was in the first ever Champions League where Rangers came within a whisker of making their mark. Ten Euro matches unbeaten – often achieved with an injury-hit side – would have been enough to make the final most other years, but Marseille, with the help of some friends, prevented Rangers enjoying their finest hour.

The chief protagonists of season 1992/93, including Ian Durrant, John ‘Bomber’ Brown and Dave McPherson, help tell the story of a campaign that still occupies a prominent place in the minds of Rangers fans. Was 1992/93 Rangers’ greatest season in living memory? I’ll let you decide!

Relive the scintillating football, the unique atmosphere and behind-the-scenes stories of Rangers’ unforgettable 1992/93 season. Read A Season to Be Cheerful and discover:

Jeff Holmes is the author of several books on Glasgow Rangers, including The Journey; Blue Thunder: The Jock Wallace Story, and 1986: The Rangers Revolution. In 2016, his book on former Rangers star Marco Negri – Moody Blue: The Story of Mysterious Marco – was shortlisted for Best International Autobiography at the Cross British Sports Book Awards. Jeff has covered Scottish football matches for the The Sun, the Daily Recordand the Sunday Mail.