Alashkert coach and striker confident ahead of Ibrox tie 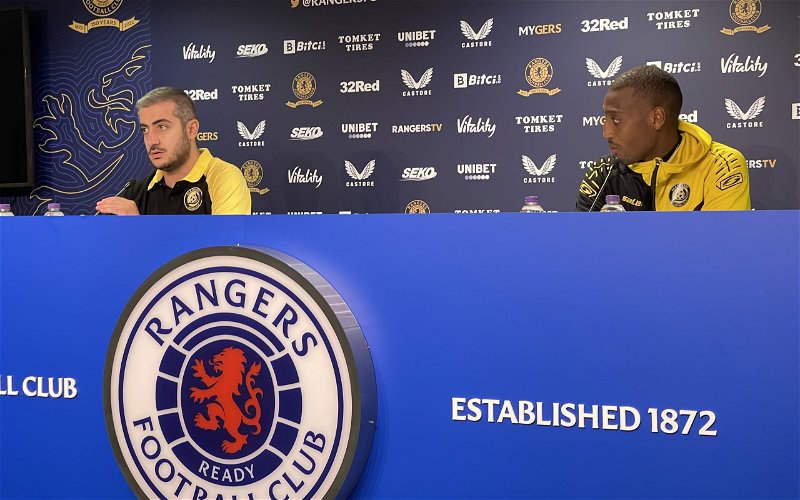 Rangers return to Ibrox on Thursday for their third Europa League Play-Off in as many years, with many considering Armenian opponents Alashkert as the kindest draw they’ve had in that period.

Priced as long as 22/1 with some bookmakers, Alashkert enter the tie as the most unfancied team in this round, but manager Aleksander Grigoryan isn’t letting the underdog tag affect his preparation in any way.

“For tomorrow’s game, we have a good opponent.

“We will try to control the ball, that is our playing style, so we will try and do that as much as possible in order to gain a good result.”

Like Rangers, Alashkert have had a troubling start to their season. Two domestic home defeats to Ararat and Van without registering a goal, as well as elimination from the Champions League qualifier following an unconvincing win against Welsh side Connah’s Quay and a heavy defeat over two legs to Sheriff Tiraspol from Moldova.

Grigoryan admits that the start hasn’t been befitting of his league-winning side, but explained that with the focus being on European qualification, preparation for domestic games has suffered.

“We didn’t have time for a good rehabilitation period after the second leg of the Sheriff Tiraspol match, which we feel caused the defeat in our first league game against Ararat.

“For the second league game, we felt that we had to change the full team – only the goalkeeper started from the previous match – and it’s difficult to play with a second squad and expect a good result.”

Alashkert made it to the Play Off round following an unexpected victory over 9-man Kazakh side Kairat Almaty after extra time, with Portuguse forward Jose Embalo scoring twice. Embalo appreciates the size of the task at hand for his side, but remains confident that he can contribute towards a big upset.

“We think it will be difficult, but we have some plans from the coach.

“I feel confident, I hope that I can do a great job in helping the team achieve our target. Playing at a stadium like Ibrox is why I play football.

“I’m really excited, I’ve seen a lot of Rangers games and it’s an amazing club – the atmosphere is unbelievable. I want to be able to say that I’ve played there, and done a great job.”

Rangers will look to exploit Alashkert’s defensive weaknesses, but Embalo believes that over-confidence on Rangers’ behalf could be their downfall.

“We think Rangers will be 400% confident of winning this game, but if we can show confidence ourselves during the game then I think we have a chance.”

Both sides have a guaranteed UEFA Conference League group stage place for the loser of this tie, but Rangers will expect to qualify against a heavily unfancied Alashket side who have struggled for results and form so far this season.

A strong first leg performance will give Steven Gerrard the option to rest players for the away leg just days before the first Old Firm game of the season, and few would put that sort of result past this Rangers team on Thursday evening.