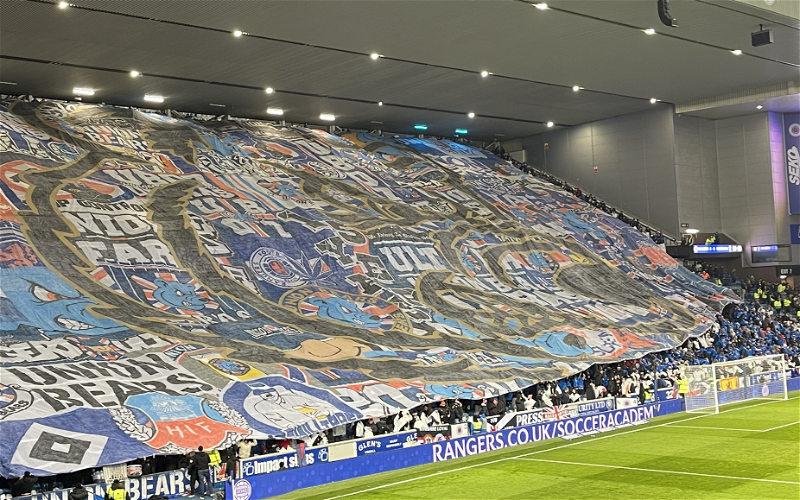 Alfredo Morelos scored the winner as the Michael Beale era kicked off with a nail biting 3-2 win over Hibs at a frosty Ibrox.

The Union Bears kicked off the match with a stunning display to celebrate their 15th anniversary however the good feeling towards that and the new manager couldn’t be replicated on the pitch as Hibs started the better side with a speculative Youan effort requiring a top save from Allan McGregor to push it over the bar.

Unfortunately, Hibs were to score from the resultant corner as Rangers linked Ryan Porteous rose above everyone in the box to head home, Beale will no doubt be reeling as it was such an easy goal to concede with no one picking up Porteous who was playing further forward in the midfield.

Rangers responded in the correct Fashion just eight minutes later as Sakala controlled the ball nicely and fired the ball past the Hibs keeper to equalise after a lay off from Kent.

It should have been the start of a sustained period of pressure from Rangers but almost instantly Hibs retook the lead as a ball was played in behind Tavernier and Lundstram that allowed Kevin Nisbet to fire high into the Rangers net to send the away support into raptures.

The goal deflated Ibrox as Rangers hardly created a chance to equalise again in the first period, and Hibs almost scored a third as a similar ball was put through into the other side with McGregor foiling Youan to keep the score at 2-1 heading into the break.

No changes were made at half time as Rangers looked to get back into the match, despite this you could see a change in tempo with Beale clearly believing that the same eleven could do the job.

Sakala almost doubled his goal tally after an excellent cross from Adam Devine laid it on a plate for the Zambian striker whose effort was saved by Marshall.

Rangers continued to dominate possession and the pressure paid off in the 58th minute as a second successive corner allowed Malik Tillman to flick the ball onto Ryan Jack who bundled the ball home.

Thankfully, the mistakes of the first equaliser weren’t to be replicated and the goal got the Ibrox faithful hopeful for a winner which came shortly after.

James Tavernier played an excellent pass down to Malik Tillman whose tantalising close control opened the Hibs defence up, allowing him to square to Alfredo Morelos, and the Colombian tapped it in to send the Ibrox crowd into raptures.

Michael Beale wanted to ensure that the result was safe and brought on Steven Davis for Fashion Sakala to add an extra layer of protection in the midfield and control the rest of the match.

Ben Davies also made his return from injury as Scott Arfield, Rabbi Matondo and Scott Wright came on for Tillman, Devine, Kamara and Morelos.

The goal from Morelos deflated the Hibs players and supporters who offered no threat for the rest of the second period, and after decent half chances for Morelos and Jack to double their tally the 3-2 win was secured.

The manager said on Wednesday’s press conference that Ben Davies and Connor Goldson were available for selection, and we seen Davies make his five-minute cameo before the end.

Beale explained that Davies had trained for three days with Goldson only three which is why he wasn’t in the squad.

Leon King and Antonio Colak also weren’t involved as Beale confirmed the defender had caught a sickness bug last night and Colak pulled his calf in training yesterday, he also said the Croatian would’ve started with Morelos up front had he been fit.

An update was also provided into long term absentees Ianis Hagi and Ridvan Yilmaz with Beale confirming that Hagi is back in light training after signing his contract extension and the diagnosis for Yilmaz was 12 weeks and we are about 6 weeks into that.

Nevertheless, young Adam Devine put in a fine performance at left back and will be an able replacement in the time that Borna Barisic is still unavailable due to being on World Cup duty for Croatia.

The Beale era has well and truly begun!

Man of the Match: Malik Tillman