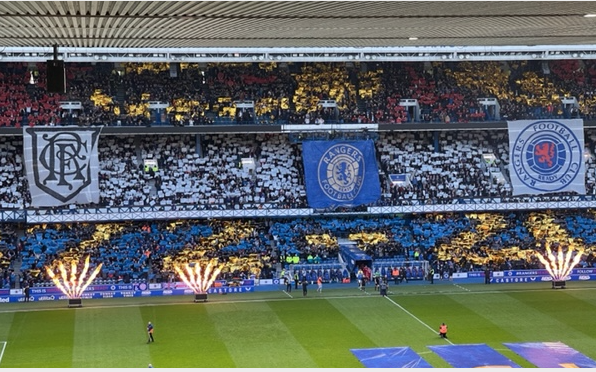 When people say football fans can be ‘fickle’ I’m not sure they can truly appreciate the meaning of the word until they have had a conversation with your average Bluenose.  In fact, make that your average Bluenose in 2022.  There has been an air of negativity around Ibrox this week as the topsy-turvy nature that is this season took another turn, with everyone from the Board of Directors, PR Department, money-men, ex-players and current Manager all in the firing line following the much publicised ‘friendly’ announcement with Celtic, to be played in Australia in November.  Even some fan media outlets got it in the neck for not disagreeing with the decision, to go ahead with this farcical mid-season tournament, ‘strongly enough’.  Yes, welcome to the mad world of being a Rangers fan and just to add to everyone’s anger there was the small matter of having to play two games this week. Of course, some of the negativity was borne out of these on-field matters.  Dropped points to Motherwell last weekend with the game seemingly in the bag set the tone for the week ahead and a scrappy 1-0 victory at St Johnstone did nothing to abate anyone’s temper.  This was understandable perhaps, given the quality of performance on the night (and the afore-mentioned announcement still fresh in everyone’s mind) but, with every game now a ‘must win’ it was job done and thus ended a run of dropped points away from home, that have plagued the light blues since the turn of the year.

There was therefore, a nervous energy around Ibrox yesterday, as The Champions lined up against Aberdeen on this, the greatest of days when the Club celebrated 150 years of its magnificent history.  Keep in mind, we are only NINE days on from what has been described as ‘one of the greatest European victories’ EVER so there really should’ve been a carnival atmosphere in the lead up to this game but, as already stated, football fans are a fickle bunch and there is nothing more important to us than winning football matches and for Rangers fans in 2022, there is nothing more important than winning the league title.  That’s why, when the final whistle sounded and confirmed Rangers as 1-0 winners on the day, it didn’t surprise me in the slightest that the angst and tension that had been present for much of the match, disappeared into thin air as the near 50 thousand ‘Gers fans, decked head to toe in red, white and blue, which created a quite magnificent backdrop on the day, fairly skipped out of Ibrox, as the team drew level with Celtic in the title race, for 24 hours at least.  Of course, for many the emotive nature of this week’s events won’t be forgotten quite so quickly but, as far as on-field matters go, it’s a step in the right direction.  In all honesty, yesterday’s performance wasn’t great, in fact for large swathes of the opening 60 minutes, it was a performance that mirrored that of mid-week.  Devoid of ideas and too ‘one-paced’ the introduction of Arfield, Balogun and Roofe seemed to give the team (and the stands a lift), with the latter popping up, to prod home the winner with only 9 minutes to go.  It was far from perfect but, in the context of the victory this one felt different, this one felt important, this one felt BIG.  Scott Arfield himself reflected:

It felt big, the exact same as the fans. I think the way the game went we expected them to contain it but, it’s a massive goal and in the grand scheme of things we just hope it’s as big as we think it will be.  It happens in football, sometimes you just don’t get what you deserve, like Dundee Utd and Motherwell and then the last two games probably haven’t been as good as those but, no one really cares because you’ve got the result.  In the grand scheme of things, it doesn’t mean anything (with so many games to play) it’s just three points but, on a day like to today, with the 150 years celebrations it does feel bigger.

Arfield has been a pivotal figure since manager, Giovanni Van Bronckhorst took over and it’s hard not to be carried along with his enthusiasm in playing for and winning games for Rangers.  An infectious personality Arfield has passion pouring out of him for this football club and it’s clear he is loving every minute of it.

I feel great, getting ‘football fit’ is different from pre-season (for example) and that’s exactly how I feel at the minute and I’m feeling fitter the more games I play. If your boss values what you do you in anything, you are happy and the more you play for this football club you are happier still.

Arfield paid special tribute to teammate and match winner Kemar Roofe, who has had to be patient of late, seeing only ten minutes of league action since the disappointing defeat to Celtic.  Indeed, Roofe’s only start came against part-time outfit Annan Athletic in the Scottish Cup but, Arfield knows only too well the importance of staying positive in times like this.  It was a bold move from the manager, replacing talisman Alfredo Morelos which was met by more than a few grumbles from the stands but, it was a calculated gamble that paid off in spades, as Roofe reacted sharpest to knock home Tavernier’s deflected header and send Rangers on the road to victory.

You need to be ready, if you aren’t ready when you DO come on you aren’t getting the same chance again because you haven’t played to your strengths and taken the opportunity.   Kemar has done that perfectly today, he hasn’t had a lot of minutes lately and he’s taken his opportunity and scored a crucial goal.

Rangers now go into a ‘mini-break’ of sorts, in a much more positive frame of mind, ahead of another massive European night at Ibrox before Scottish Cup duty at Dens Park next weekend.  For the past few seasons, the team have been a different animal in European competition.  It most definitely brings out the best in our players and the supporters now look forward to that game with a lot more relish than they might have done only 24 hours ago, thanks to that solitary Roofe goal.

Fickle? There’s no question of that and, I wouldn’t have it any other way!