Bears in Europe, A Debut To Remember 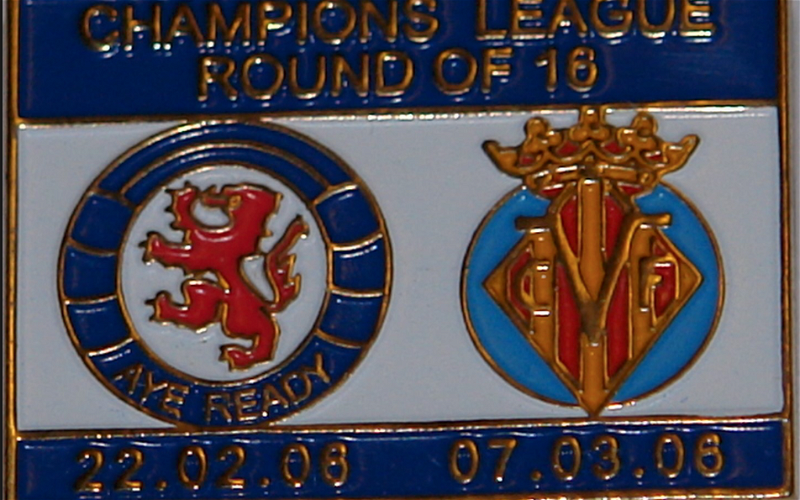 Over the last few weeks, I cant help but feel envious of all the Bears who made it out to Skopje and most recently to Osijek.

Unfortunately, work and other commitments have ruled me out of contention for our European away games so far this season and probably for the rest of this campaign, unless something unexpected happens.

It doesn’t get much better than following the Rangers abroad and I know this first hand, having had the honour and the experience of eight previous Euro away days, nine if including Manchester. It was great to see the young lads enjoying themselves in Skopje, probably the first proper trip for many of them. I say to them and everyone else, do the trips while you can, when you can, before other things in life take over.

For my particular ‘European away debut’, we are winding the clock back to March 2006, I was 18 and I was going to take in Rangers against Villarreal in the last 16 of the Champions League.  Back then as most people will know, cheap flights really were cheap which is just as well, given that I was still at school. I think our Ryanair flights were about £40 return. Thanks to my parents approval and a very modest budget, I set of with around 15/20 other Bears including my good friend and his dad, from Belfast via Dublin to Spain for a few days.

Knowing that I had no realistic chance of getting a ticket, I was happy to go along for the experience and to take in the sights and sounds of a European game after hearing plenty about these adventures and looking I forward to it.

The day of the game brought many sights to behold and the memories will live with me forever. Villarreal is just a small town and it was overrun by the Bears that day, it was brilliant. Red, white and blue everywhere and the party was well underway from mid-afternoon in the Spanish sun. As the evening approached, our group made a plan. Initially, there were only two or three of us that had tickets for the match. Others were willing and able to buy home end tickets from the locals, who were very happy to oblige and they certainly cashed in.

Supply and demand meant that they could name their price and Bears were bidding against each other as the locals were introduced to the passionate and loyal blue pound. I think I had about 150 Euros pocket money to last me for the four days and we had already been there for a day so I certainly wasn’t going to strike a blow in the bidding wars.

There were also fake tickets, quite a few of them surfaced that day and we ended up with some amongst our group, again silly money was being exchanged. In the end there was only three or four of us without tickets, genuine or fake, and we all decided that we would meet up after the game at the same spot, from where we had been gathered. I had settled for watching the game on a small TV in a bar just beside where we had gathered for the last few hours.

Before we all dispersed, my mate’s Da sent me to the bar to get a round in but I never got as far as ordering. As I was waiting, a drunk Bear clattered into me and spilt a pint all over me. As he apologised, he reached into his pocket and handed me a ticket and said something to the effect of ‘sorry pal, theres a ticket for you’. What? Sorry? How much? But? Needless to say, I was quite confused, but now very excited. I could clearly see this was a fake ticket and given the nick of the lad, he had probably funded his trip by parting with a few of them. He wouldn’t take any money off me.

I got back out to the rest to show my ticket and my excitement, but unfortunately for them that was all as I was empty handed and gave the beer money back resulting in a few choice words directed my way in good banter.

I was now on my approach to the stadium to see what the situation was. I knew that there were plenty of these fake tickets and was a bit unsure given that the relatively mid-sized venue would already be full without the added issue of people gaining entry without a genuine ticket and its consequences on safety.

From what I recall, I had made my way to the official away end. It was then, I had my first sight of the brutality of the Spanish Guardia Civil. There was a big queue, but I could see some scuffles and a lot of shouting ahead. As I got closer, I could see why things were getting worse. The polis were holding a light to the tickets to check for the embossed stamp that was a regular feature on official Rangers away tickets. The fakes obviously didn’t have this and the thugs in uniform were battering those in possession of them. Some Bears took an absolute beating and it was getting ugly. No way – I had to get myself out there and I did.

What do I do now? I moved around a bit and as kick off was approaching I was getting desperate. I decided that I would offer all my money for a spare ticket in the hope that some locals would be able to help. I could always borrow money off the adults until I get home couldn’t I?

I was asking people as they went past. ‘Ticket please’ ‘Entradas por favor’ (Yes, I learned that… I know) It seemed to work, a couple of Villarreal fans stopped. They had a spare. I think they wanted 100 Euros for the ticket. I opened my wallet but I bottled it and decided that I couldn’t hand over basically all my money. I was gutted and confused, why did I do that. Why didn’t I pay the money?

The Bears were getting very loud inside, I reluctantly decided I would have to make my way back to the bar so that I didn’t miss too much of the game and see who was left inside. A couple of last ditch attempts at asking for tickets fell on deaf ears, the locals were in a hurry to make it into their seats for kick off.

I started my walk but I could see two non-locals walking toward me. As they got a bit closer, this was very obvious. The two guys had ginger hair and glasses, not too unlike a certain musical duo from the parish of the burning spoon. I did a double take but it wasn’t them.

They stopped and looked at me. ‘Are you drunk?’ No, I responded and I wasn’t. ‘Are you sensible? Will you behave?’  I looked at them a bit unsure and confused. They quickly spoke to each other.

‘Keep that Rangers top covered son, its your lucky day’ and they handed me a ticket. I lifted my wallet out and was told to put it away. ‘You’re coming in with us and you better fucking behave yourself’ I had just been handed a hospitality section ticket worth 150 Euros.

For some reason I decided to bring my jacket out of the hotel on a day that it clearly wasn’t needed and what a decision that turned out to be.

These two men worked for the tiling giant Porcelanosa at Hillington, not far from Ibrox and were on an all expenses paid jolly, thanks to their employers whose headquarters is based nearby in Villarreal.

The Champions League anthem blurred into the night sky as we made our way inside, missing the first few mins of the game. The guys stood with their colleagues chuckling at me as I was talking pictures on my phone to prove to the others that I wasn’t making this up. It was informal, basic hospitality. Buffet food, beer and soft drinks laid out on tables in the concourse.

We went to our seats. It was a the small front low section of the stand you see opposite the main stand and camera angle at El Madrigal. There were TVs above my head showing the game live and waitress service. This was incredible. Given that we missed the first five mins or so, it was barely five mins later that Peter Lovenkrands scored. I celebrated more than I was supposed to but so what!  This was fairytale stuff and yes, probably hard to believe.

I don’t remember too much about the game given my shock and excitement but wow.  The noise from the Bears who had taken over the stadium. Being yards away from Ian Murray running the line at left back. That miss from Boyd. So close to making it to the last eight of the Champions League. The team and fans done ourselves proud.

I thanked and thanked the men for giving me this experience after the game as we departed then made it back to our group at the meeting point.  “Did you get in they said?…” I excitedly recalled my story with my two tickets, photos and Villarreal logo branded napkins from hospitality to show for my endeavours.

Unbelievable, but thankfully it happened to me.

It’s all about the Rangers.