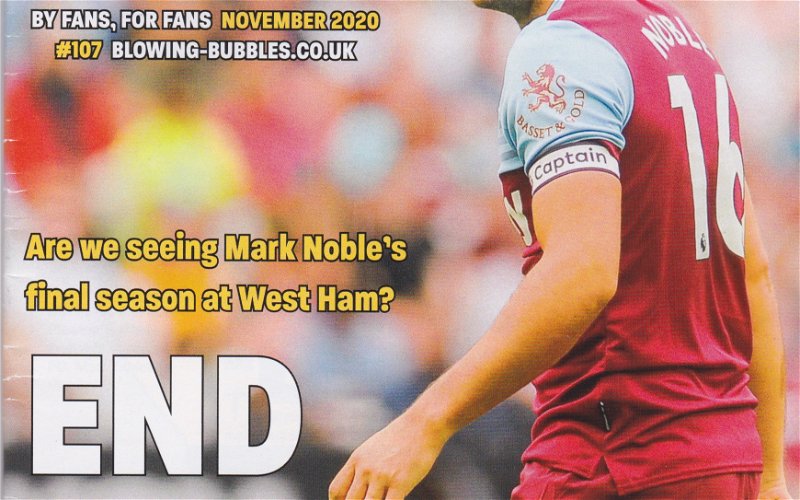 West Ham have always struck me as a club who never felt the need to want to be loved.  You accept them on their terms or you don’t and you walk away.  A big club but also one with a localised support.

I still have an almost complete set of “Fortune’s Always Hiding” – an early fanzine that was great for it’s cartoons and don’t give a damn attitude.  The editor and his missus emigrated to America and that was that.

Blowing Bubbles, colour throughout, doesn’t have that feel.  It’s written in a welcoming upbeat kind of way – but it is all about West Ham.  No musings on the FA or UEFA or whatever passing fad seems to catch the breeze.  It seems as if every first team player has a couple of pages about them included in the zine!

As well as a fond look at Mark Noble’s career there are disections of Jack Wilshire, Said Benrahma, Manuel Lanzini, Sebastian Haller and Fabian Balbuena.

In this issue, I particularly liked an interview with former West Ham player Paul Butler now working in Sierra Leone as manager of the national team after a career that took him from playing for Notts County, Grimsby and West Brom to coaching in Australia, Singapore, Indonesia, Thailand, Malaysia and Botswana.

You can purchase a copy using this link – https://blowing-bubbles.co.uk/subscribe/