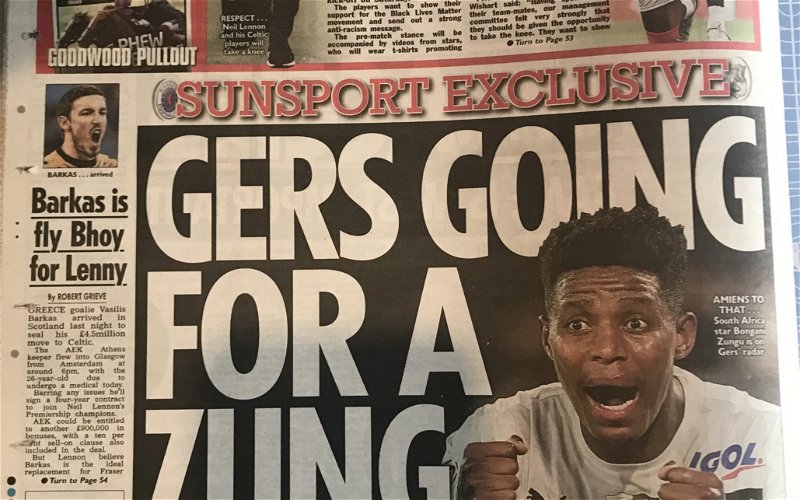 FollowFollow spoke to Liam Bekker, a Cape Town based writer, to get a better understanding of the type of player and character that Rangers have signed in Bongani Zungu.

The 29 times capped Bafana Bafana star had been on the market earlier in the year for around the £4m mark at a time when his fitness, game time and contractual status just didn’t fit the parameters Rangers have set for recruitment.

When asked about the type of player that Zungu is, Bekker responded approvingly.

LB. “He is a versatile midfielder. He started his career playing further forward but is now in a more defensive role. I heard that Steven Gerrard likened him to Patrick Viera and while that’s a bit ambitious, he’s almost that type. Very good on the ball, great passer, very combative. He definitely has the eye for a pass from a deeper position. He is excellent in the transition, from defense to attack, he can pick a run out and his passing range is a definite strength. I would go as far as saying he could play the box to box role as he has experience of playing further forward earlier in his career.

Steven Gerrard is the perfect manager for him at this point in his career, to learn from and to improve in a specific role that the manager wants him to play.

On Zungu’s character and any possible challenges ahead in the move to Scotland, following spells in Portugal and France.

“I don’t see any challenges. There is this social media persona to Zungu, he is out there, a bit flashy and quite vocal on Twitter and Instagram like some other modern players but when he gets on the pitch he is a serious competitor. The experience I have had with him is that he has always been a professional and it is the performance on the pitch that matters most.

On the pressure and demands at Ibrox, this season especially.

“ I think Rangers is the biggest move of his career so far, a club with a big history, Europa League football again this season as well. He might need some time to adapt but I’m sure he will hit the ground running. Zungu is strong and athletic but with technical qualities too.

South African press and fan reaction to the move.

“They are loving it, South Africa overall has struggled in the last decade to export players. We had the likes of Benni McCarthy and Steven Pieenar in Europe. Zungu at Rangers is getting a lot of people excited. He will play in the Europa League and is a popular player in this country. He has come from a background of being part of a successful club in Mamelodi Sundowns who have bucked the trend and managed to get players to Europe recently, Percy Tau at Anderlecht, on loan from Brighton and Keagan Dolly at Montpellier are two who have made the step up, like Bongani Zungu.

Zungu’s injuries and his track record.

He is quite combative, physical and therefore prone to picking up bookings. He hasn’t had too many red cards, but he commits fouls which is part and parcel of the type of player he is. Almost as a by-product of all of this and his style, he has had a few bad injuries, two knee injuries in fact but he has overcome those. It is something that could pop up, but hopefully not and it is all behind him.

Will Zungu be a success at Rangers?

He’s an exciting player, you guys are gonna have a lot of fun watching him. I hope he is given time to find his feet and get going. I think it’s a good fit for the player and the club, a very good signing and as mentioned, Gerrard can mentor him to be a better player and he can play different roles. Zungu will benefit from his past experiences, he can play deep, 8, 10, even out wide if needed.

Liam Bekker is a writer for Kick Off magazine in South Africa. For his perspective on Zungu at Rangers and more, you can follow him on Twitter, @LiamBekker