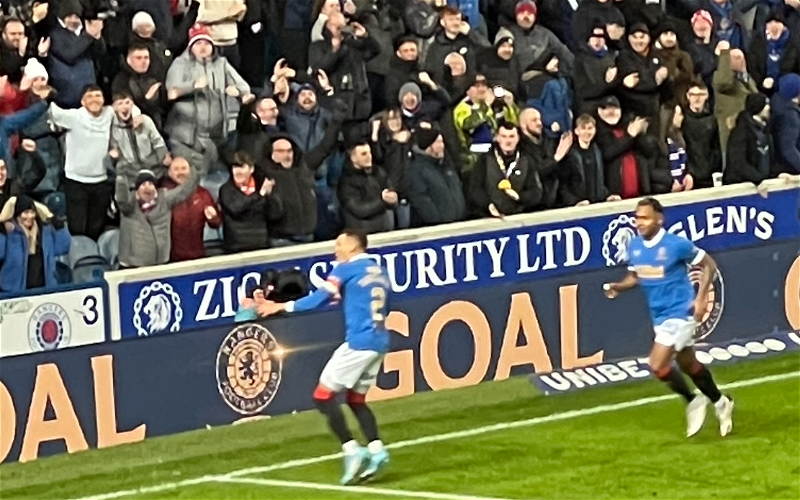 Although League Championships in Scotland are not won in February, they can be lost. Seven days ago, on just the second day of February, Rangers were defeated 3-0 by Celtic in what was without doubt the teams worst performance of the season, a result which saw the Ibrox club  relinquish top spot in the league. A week later, and Rangers once again took to the field on a February evening against a team that play in Green. The opposition again came from the East (just not the East End) but thankfully for Rangers fans the similarity between the two fixtures ended here.

Having demolished Hibs Edinburgh rivals, Hearts, 5-0 on Sunday, Rangers were hoping to dish out some further capital punishment to a Hibs side on a terrible run of form. The side from the capital recently appointed Shaun Maloney as their new manager and the former Belgium assistant coach made a number of changes to the Hibs side from the weekend. The team that started at Ibrox included no less than seven players who have at different points in their career, played in a defensive position.

Hibs game plan of trying to nullify the attacking threat of Rangers was clear from before kick off but with only three minutes on the clock, they were 1-0 down after Ryan Kent was fouled inside the box and James Tavernier dispatched the resulting penalty. Rangers dominated the first half and a second goal from the outstanding Alfredo Morelos after fifty six minutes finished the game as a contest. It was Rangers second win in four days against a side from the capital and was exactly what Giovanni Van Bronckhurst wanted, and needed, from his team following the disappointing result to Celtic a week ago.

Asked for his thoughts on the game Van Bronckhurst said…

“We were really well organised throughout the whole game. If we could put pressure on their defence we did…particualry in the second half. The second goal from Alfredo was an important one and after that we controlled the game…Overall very pleased with the three points.”

The manager was also asked how he felt his team responded to adversary, in particular after the defeat at Celtic Park last week…

“Of course disappointments will happen in the season…what’s important is the way you react to those moments, that’s what is vital for the future… the reaction (after the Celtic game) was good, especially our character, our intensity, our mentality. I’m really pleased with the response. It’s now up to us to keep going.

There is no doubt that following the 3-0 loss to Celtic there needed to be a reaction from Rangers as not only was the defeat itself damaging, but the performance as a whole had been exceptionally poor. Against Hearts and Hibs Rangers scored seven, didn’t concede and controlled both games, in particular winning the midfield battle, with John Lundstram returning to the side for both games and staking his claim for a regular starting place with two excellent performances.

“He’s done really well, I’m happy for John. It’s not easy to not be playing and to be on the bench. The response he has shown and the performances he has had in the last two games, for me that’s what I want. Competition in this area is really hard at the moment…this is a good thing for me.”

Whilst Lundtsram played his part in the both victories there was no doubting the man of the match against Hibs. Alfredo Morelos scored his ninth goal in eleven games under Van Bronckhurst and the Columbian showed much more than just his goalscoring instinct in the game. He also linked the play, dropped deep to create space for teammates and on more than one occasion sprayed passes out wide to Ryan Kent and Scott Arfield.

Van Bronckhurst talked about the role Morelos played in the game…

“We wanted to get the ball to Alfredo and play off him. He did really well in the first half, as when we found him he turned and tried to find Ryan (Kent) on the left, who was isolated with just one defender. He also linked up well with the midfield players…We need a player who can hold the ball and I think Morelos is doing really well in finding the moments to be a target man, but also at keeping himself in the 18 yard box as that’s where he is very dangerous”

Rangers take a break from league business on Saturday with a trip to League two Annan Athletic in the Scottish Cup, before travelling to Germany for the 1st leg of their Europa League last 32 tie. They round off their travels with a trip to Dundee to take on Dundee Utd on the 20th February. When Rangers return to Ibrox to face Borussia Dortmund on the 24th February the month will almost be over and we will be a little closer to finding out if Giovanni Van Bronckhurst is the man to lead Rangers to further success.