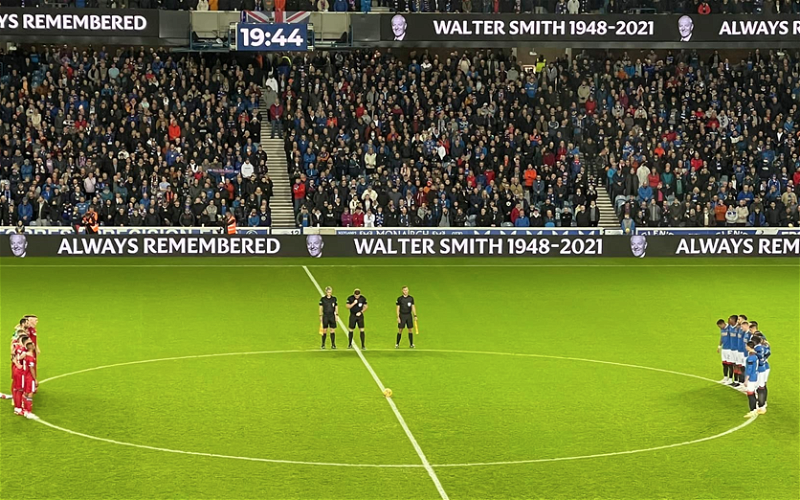 ‘We’re on our way to Ibrox, come join our happy throng’ is one of the lyrics in the song ‘We Shall Not Be Moved’ that is heard every other Saturday (or Wednesday or Thursday) when the supporters gather for a game. But as the masses headed towards their seats ahead of the first meeting of the season with Aberdeen, they did so in a much more sombre mood.

Walter Smith has touched the hearts and minds of Rangers supporters worldwide, and news of his passing yesterday at the age of 73 caused a great deal of upset not just in the Rangers family but across the world of football. Many took time to pause and reflect on their memories of a man who brought huge success to Rangers in the shape of 21 major pieces of silverware to the majestic Trophy Room, while others looked back fondly on his time in charge of Scotland. There were tributes too from the club’s Walter represented as a player, Dundee United and Dumbarton, and the other club he managed, Everton.

You could sense that losing such a titanic and colossal figure was still hitting everyone hard. Gatherings at the gates were hushed and reflective. There was then a lovely touch when Deacon Blue’s iconic anthem, Dignity, blasted through the PA system before the teams emerged. Humility and dignity were something Walter had in abundance.

And then it was time. The crowd rose in unison ahead of the 19.45 kick off and following a shrill blast of referee John Beaton’s whistle, they all stood and impeccably observed a minute’s silence. So often a cauldron of noise, an eerie hush filled the air around Ibrox, as each and every one of the supporters present paid their respects to the most successful Rangers manager of the post-war era.

The second blast of Beaton’s whistle was met by a raucous, ear-splitting roar, and a roof-raising rendition of ‘Walter Smith’s Blue and White Army’. The backdrop was a magnificent tifo in the lower half of the Broomloan Road end that had been arranged by the Union Bears.

The Rangers starting XI showed two changes from the side that defeated St Mirren at the weekend. Borna Barisic dropped out of the squad completely, and Glenn Kamara came into midfield, with Steven Davis, one of only two players in the current squad that had played under Walter Smith, taking a place on the bench. While many expected the other player that was on the playing staff during Walter’s second coming, Allan McGregor, to return between the sticks, Steven Gerrard elected to retain John McLaughlin. McGregor, rested at the weekend, was on the bench alongside Davis, Simpson, Patterson, Arfield, Wright, and Sakala.

For the visitors, they had former Rangers youngsters Ross McCrorie and David Bates at the heart of their defence, and there was a first appearance at Ibrox in red for the former Celtic captain, Scott Brown.

Torrential rain before the match had left half of Edmiston Drive flooded and driving conditions treacherous, but it had relented as Aberdeen’s Christian Ramirez kicked off. The decibel level rose again, Ibrox was rocking.

At Rangers the mentality is always a winning one. Anything less than three points won’t do. But the Rangers community wanted to win this one more than any other in recent memory; they wanted to win it for Walter. You had the feeling therefore that this could be a special night. Alas, it wasn’t to be.

Yet Rangers started with attacking intent. Inside the first couple of minutes, the ball was swept wide by Lundstram to Calvin Bassey. His curling cross was headed away for a corner by McCrorie. And after a series of passes were exchanged, Bassey bustled his way forward and his cross-cum-shot was parried by Joe Lewis.

There was a relentlessness about Rangers. They weren’t affording Aberdeen any time on the ball, and Lundstram was again dictating play. But the Englishman was caught out after nine minutes when Aberdeen took the lead. In fairness, Goldson sold Lundstram short when he played a short goal kick to him, and he was caught in possession. The ball was worked to Ryan Hedges and his cross was headed home by Ramirez.

It was schoolboy defending, but there was almost an immediate response from Rangers. Joe Aribo won a corner on the right, and from Hagi’s delivery, Goldson headed down for Morelos who shot towards goal but it was blocked away for another corner.

But just as Rangers looked to be reverting to the way they had started the game, shocking defending at the other end saw them fall further behind after quarter of an hour. After Balogun had slid in to divert the ball for a corner, McGeouch’s delivery picked out Brown in acres of space and his diving header gave McLaughlin no chance. It was kamikaze defending, with Tavernier the most culpable, losing his man and affording him a simple chance to double the visitors’ lead. He was magnanimous enough to admit that in his post-match interview.

The alarm bells were tolling, and Lewis Ferguson should perhaps have done better than fire in a weak effort that was smothered by McLaughlin. Rangers were rattled but grabbed a lifeline when Aribo was taken down on the corner of the 18-yard box after 20 minutes.

Tavernier and Hagi stood over the free kick, but it was the skipper that executed a delicious delivery that was headed home by Alfredo Morelos. It was goal number 101 for the Colombian on his 200th appearance, and his seventh against Aberdeen. But it was another frustrating night overall for Morelos. He was superbly marshalled by Scott Brown and offered little threat other than in that moment.

It had been a breath-taking start to the game – the pace had hardly let up – and another inviting cross from Bassey was headed away by Brown. You couldn’t take your eyes off the action, and when Aribo won a corner kick, Tavernier took it. The ball broke to Lundstram, and his shot was deflected over the bar.

Rangers were causing problems from set-pieces, and parity was almost restored from such a source three minutes before the interval. Aribo won another corner, and from Tavernier’s delivery, a bullet header from Goldson was brilliantly saved by Lewis.

That was the last action of the first half. As the teams went up the tunnel, the supporters were left to reflect on more shambolic defending from Rangers. Such a pillar of strength last season, the concession of cheap goals has been a hallmark of the opening 11 league games, but it was hoped that some sort of response in the second half would see Rangers overcome the deficit they faced.

That response did not come. There were too many loose passes from Rangers and a lack of cohesion between the front three. Joe Lewis was untroubled and was well-protected by a wall of red jerseys. If you batter a barrier long enough it will yield, but unfortunately, Rangers didn’t do that.

Steven Gerrard made his first change of the evening just after the hour mark. Scott Arfield came on for Lundstram, but the alteration did little to alter the pattern of play. The ball simply wasn’t sticking in forward areas, and Gerrard, hands thrust deep in his pockets, cut a frustrated figure in the technical area.

As a free kick from Tavernier was headed harmlessly wide by Morelos, applause rang around the stands, another tribute to Walter Smith. The rain was now heavy, like the hearts of the Rangers supporters, but they hoped to see one last push from their side. And after a double substitution, they were hailing an equalising goal.

Sakala and Wright came on for Roofe and Aribo, and when the former was fouled in the penalty area, John Beaton pointed to the penalty spot. James Tavernier took responsibility, and clinically thumped the ball into the corner of the net. It was a bit of redemption for the skipper. In addition to his slack marking at the second goal, he had executed a few loose passes and took some heavy touches too. It was not one of his best nights in a Rangers jersey despite the goal and assist.

The equaliser breathed new life into Rangers and the fans, and we seemed set for a rousing final nine minutes. But once again it was a false dawn, and the only real threat came from set pieces and the delivery from those in the closing stages did not have sufficient quality.

The game ended 2-2, and the Rangers performance summed up the first 11 league matches of the season, particularly the games at Ibrox. Rangers have dropped six points at home, and the goals conceded in each of the games in which points have been spilled have all been avoidable. We have been masters of our own downfall against Motherwell, Hearts and now Aberdeen.

Steven was apologetic for keeping us waiting for the post-match press conference, but his lateness suggested that there had been some robust discussions with the players in the dressing room. His tolerance of the sloppy showings appears to have reached its limit, and when questioned it was apparent that he knew what deficiencies had to be addressed as priority.

At our club we always welcome the chase, but to keep ourselves out in front of the chasing pack, we need to rid ourselves of the inconsistency that has consistently dogged us thus far. And cut out the elementary errors. The next 11 league matches will take us to four of the most difficult away grounds in the country – Parkhead, Pittodrie, Easter Road, and Tynecastle – so we need to find solutions quickly, or the slender advantage we have at the top of the table won’t last long.