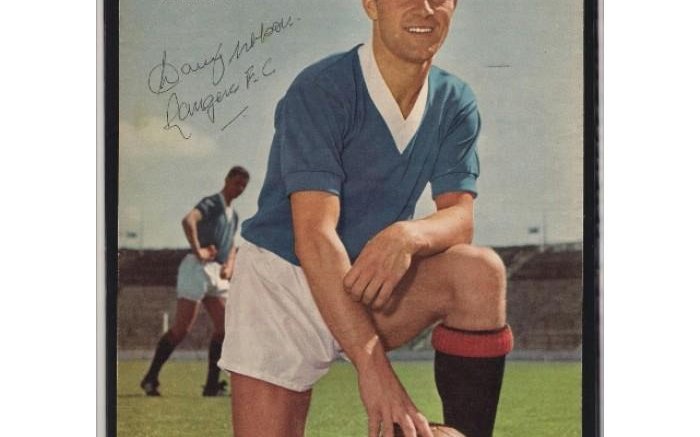 I wouldn’t say I’m an impulsive person, but one occasion that I was pleased to make an instinctive decision was when I sent a message to Davie Wilson. That message set in motion a chain of events that led to the publication of Davie’s incredible life story, Wilson on the Wing, and saw me strike up a friendship with a Rangers legend and one of the most humble and nicest men I have ever met.

It had always struck me as rather odd that Davie had never put pen to paper to chronicle his incredible career. He was after all an integral part of the great Rangers team of the early 1960s, the first pick at outside left who had an incredible knack of scoring as well as creating goals. Indeed, he was so talented that he could play almost anywhere, and I later learned that he played in each position for Rangers apart from centre-half. However, I have no doubt that had Scot Symon asked him, he’d have given that role a go too. On top of that, he had a stellar international career and had endeared himself to the supporters of Dundee United, Dumbarton and Queen of the South too.

When he agreed to work with me to tell his tale I was buzzing. I set myself the goal of producing a book that was not only a fitting tribute to his great football career but also covered Davie’s life off the park too. The fact I was able to reach that goal was down in no small part to Davie’s recall of the events that shaped his life. The clarity he offered in answer to the questions I asked him when we tried to join the jigsaw pieces was superb. And even latterly, there was always a twinkle in his eye, and an impish grin on his face. He had a razor-sharp sense of humour too.

The family were always accommodating, and as Davie and I sat down over a cup of tea and a bowl of soup made by Davie’s lovely wife, Avril, to talk football and family, you wouldn’t have known you were in the presence of Rangers royalty. Davie simply didn’t see himself as that, and not at any point was he boastful about what he achieved in the game. There are a lot of former footballers out there with enormous egos, but Davie Wilson wasn’t one of them.

He was an ordinary guy who achieved extraordinary things but speaking to him the focus wasn’t on what he’d done. He was happy simply talking about football and sharing the love he had for his family and Rangers FC. He took an interest in me and my family too which again sums up what a gentleman he was. He didn’t need to, but any time we met up or spoke on the phone one of the first things he would ask would be how I was doing and how my partner and the kids were.

After publication, boxes of books were delivered to Davie’s house, and I don’t think they were on the ground long before he was carrying them upstairs to open them and proudly sign all the copies inside. His family told me he was like an excited kid on Christmas morning, and I know he got a lot of pleasure out of penning ‘Best Wishes, Davie Wilson, Rangers FC’ on each of the books.

I hadn’t seen much of Davie recently but kept in touch with him by sending regular messages to Avril. She always thanked me for messaging and like Davie, took an interest in how my family and I were getting on. She’s a lovely lady, and my thoughts and prayers are with her and the family at this sad time. I only knew Davie for a short period of time and the news of his passing has hit me hard, so I can only imagine how they are all feeling. Family was always at the forefront for Davie.

God bless you, Davie. Thank you for your friendship and the opportunity to tell your story. I hope it provides a fitting legacy of a life that was lived to the full.

The world is a legend lighter today.