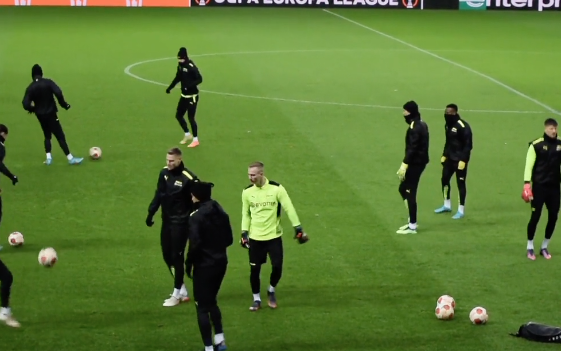 Dortmund’s two Marcos, Rose and Reus are relishing stepping out into an Ibrox cauldron of noise tomorrow night as Rangers face-off against Borrusia Dortmund for a place in the last 16 of the Europa League.  The ticket scramble for this one begun almost as soon as the draw was made, with the tie at Ibrox selling out within days, another signal of a return to the big time for Rangers, after the well documented years of absence of these huge European ties for which Ibrox is famous.  For the Scottish Champions, this stage of the Europa League, is nothing new of course, making it to the knock-out stages of the competition for the third year on the bounce we have already seen a flavour of those memorable European nights against the likes of Porto and Feyenoord but, none of the opponents came to town with the same pedigree or ‘European Powerhouse’ feel to them, in the way Dortmund do.  This promises to be a magnificent spectacle between two absolute GIANTS of the game and with Rangers leading the tie 4-2, after an incredible performance in Germany, it’s vital the Ibrox crowd do their part in roaring the team on, to what would be a famous, if somewhat unlikely victory against a side who went into this tie as favourites to win the Tournament.

Of course, the tie is far from over, Raphael Guerreiro’s late goal, with Rangers in cruise control last week, gives the home side enough to think about going into the second half of this encounter and Captain Reus says it’s up to them to silence what promises to be a raucous home crowd.

‘I don’t need to motivate anyone this is a do or die game.  We are really looking forward to it, it’s going to be a great atmosphere.  Sadly, it’s been a while since we played in front of such a big crowd of 50000 but, hopefully our performance can keep them quiet.’

Reus is no stranger to playing in this type of environment.  Dortmund have long had the reputation as being able to create one of the best home atmospheresin Europe and having been lucky enough to witness the Westfalenstadion in full tilt, there was a touch of sadness that Rangers’ massive travelling support were restricted to just 500 (official) visitors last week.  When you think back to games against Stuttgart, Leverkusen and the two incredible nights against Bayern Munich in the late 90’s, it’s clear these tie’s whet the appetite of both sets of supporters from the two Nations.

Head Coach, Marco Rose echoed the words of his Captain, the wall of noise tomorrow night doesn’t fear him but, he understands perfectly the importance of keeping it to a minimum.

‘We are looking forward to playing in front of the full stadium, it’s what football is all about.  Our youngest player, Jude Bellingham is an England International so I don’t think it will affect any of them.  Of course the atmosphere will drive Rangers but, we need to try and take something positive from it as well.  If we can do that, we can win.’

The sort of stock answers you would expect of course but, with 2700 visiting away fans, this promises to be one of the Great European Nights at Ibrox and the importance of the home support can’t be underestimated.  The team have returned with a quite unbelievable performance and result from the first leg and it’s now time for everyone to step-up and do their bit to make sure it’s a night that the two Marco’s and everyone else in attandance, won’t forget in a hurry.