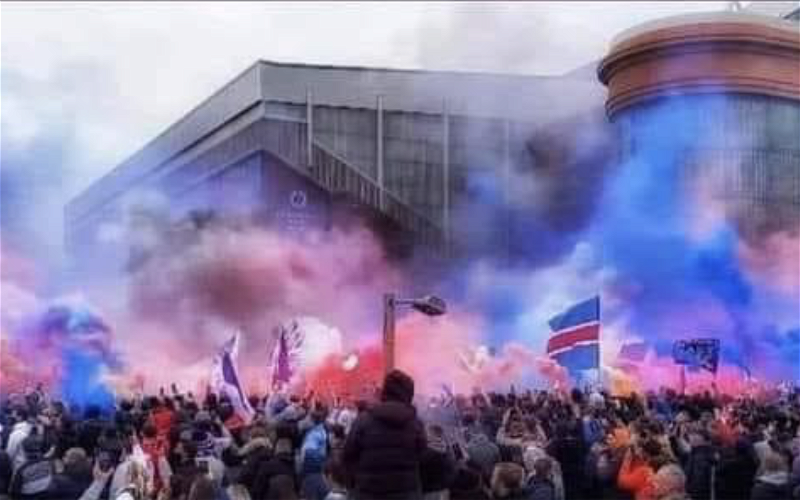 It’s been another whirlwind week in the life and times of Rangers Football Club. It started with a tricky trip to Livingston where we won convincingly, featured an AGM that focussed on our club and didn’t become embroiled in discussions about zombies, and then midweek we dug deep and won ugly at Easter Road. We even got a moment of culinary clarity from Kris Boyd regarding eggs! Do we look happy? Yes, it’s fair to say that, at this moment in time, we do.

We are still very much in the embryonic stages of the Giovanni van Bronckhorst era, but the signs thus far have been positive ones. Tactical flexibility has been apparent, with a fluid 4-3-3 breaking into a 4-2-3-1 at times. And our new manager has also shown he is not scared to change personnel as the game evolves. His substitutions in all three games have been timely and effective, with all having a decisive impact on getting the three wins registered since Gio took charge.

The waters were a wee bit choppy after Steven Gerrard’s departure, but we are riding along rather nicely on the crest of the wave at the moment. And we must be confident that that will continue when Gio takes charge of Rangers on league business at Ibrox for the first time on Saturday.

We welcome a Dundee side that are struggling this season. Promoted via the play-offs – and in the process ridding the league of another of those pesky plastic pitches – they failed to register a win in their first eight league games, and James McPake’s side have won only four times on Premiership business. The last two of those have, however, been in succession, an impressive 3-0 win over Motherwell last Saturday and a 1-0 midweek win over St Johnstone.

Both of those victories came at Dens Park, though, and Dundee have picked up just four points in their six away games, a win over St Mirren and a 1-1 draw with Hearts. Their recent record at Ibrox is poor too, last winning here in March 2001. In the Rangers XI that evening were the likes of Marcus Gayle and Steven Carson, while Claudio Caniggia opened the scoring for Dundee.

It’s not just recent form that suggests a home win, history isn’t on Dundee’s side either. In the 120 encounters between the teams in Glasgow, Dundee have won just 14. Their record on home soil isn’t much better – 35 wins from 118 matches – with a number of them coming in the dark days of the early-to-mid 1980’s when Dens Park was something of a bogey ground for Rangers.

If they are to register a win at the weekend, then Dundee may well be reliant on two former Rangers players. Jason Cummings is their top goalscorer with six goals in 15 appearances, while skipper Charlie Adam has led by example in the middle of the park.

Cummings scored six times in 18 appearances while at Ibrox in season 2017/18 and he became something of a cult hero. Among his goals were a hat trick against Falkirk in the Scottish Cup, and there were some who felt he warranted an opportunity to impress Steven Gerrard. That didn’t happen and he arrived at Dundee after spells at Peterborough United, Luton Town and Shrewsbury Town. His three league goals this season have come against St Mirren, Hibernian and Hearts, but he, of course, passed up a golden chance to add to that tally when he missed a penalty in our rather turgid 1-0 win at Dens Park back in September.

Adam was a ‘marmite’ player when he was at Rangers, you either liked him or you didn’t. There was no doubt that he had a wonderful range of passing, but a lack of pace led to questions being asked about his ability to have a regular run in the first XI. Nonetheless, Adam made 77 appearances in a Rangers jersey, scoring 15 goals and claiming 11 assists before he joined Blackpool in 2009.

It was by the seaside that Charlie’s career flourished, famously scoring one of the goals in Blackpool’s Championship play-off victory over Cardiff City. A stellar season in 2010/11 saw him shortlisted for the PFA Players’ Player of the Year and earned Charlie a move to Liverpool. He subsequently played for Stoke City and Reading and has 26 Scotland caps.

In addition to Cummings and Adam, van Bronckhorst and his staff may have identified Paul McMullan as a threat. McMullan started his career on the other side of the Old Firm divide, and he is the main source of chance creation for the Dens Park side. He has 10 assists so far this season.

For Rangers, they have momentum, and a spring in their step. We must therefore look upon this as a perfect opportunity to rack up some goals. However, although unbeaten at home, we have been less than convincing in the seven games played at Ibrox thus far. Remarkably, we have only kept a clean sheet in 29% of those games. After seven home games last season, our defence hadn’t been breached, yet the only teams getting shut out this season have been Livingston and Celtic. And we ‘kept the zero’ against Celtic back in August!

Since then, points have been spilled against Motherwell, Hearts and Aberdeen, and we have conceded first in three of the seven home games. But despite all that, you have to go back pre-Covid for the last time a team left the environs of Ibrox with all three points. Our stadium remains a fortress, but we must strive to ensure it becomes as impregnable again as it was last season.

It will be interesting to see how Gio sends his team out. In addition to flexibility and fluidity in formation, the starting XI has remained largely unchanged in his three matches thus far. At Livingston last Sunday there were only two changes from the XI that started against Sparta Prague, and only one alteration was made in Edinburgh on Wednesday. In an era of squad rotation, this is rather refreshing and having that common core in our XI must be beneficial when it comes to stability and continuity.

If there are any changes then it may well be middle-to-front. Although the dip in Connor Goldson’s form shows no signs of abating, the back five will be the same as the one that faced Hibernian. That means another opportunity for Calvin Bassey. While the more experienced Goldson has wobbled, young Bassey has excelled. He has been tremendous at the heart of the defence and Leon Balogun has a job on his hands to get back into the team when he gets back to full fitness.

In midfield, the impressive performances of late from Scott Arfield warrant a place from the start, and, if selected, he is likely to be alongside Glenn Kamara in the middle. Steven Davis has been magnificent, but Arfield’s box-to-box running at Livingston was superb – capped by an exquisite goal – and he made an impact midweek too.

Up top, Kemar Roofe should start. His calmly-taken penalty kick could have a significant bearing on the title race this year, and with Alfredo Morelos once again frustrating us in Edinburgh – missing the target with a free header – the Jamaican merits inclusion. Joe Aribo will hopefully spend most of his time as the number 10, but there has been some debate about the wide areas.

Both Ryan Kent and Ianis Hagi drew criticism for their respective performances at Easter Road. Kent offered more than Hagi, in fairness, with his direct running, so he should keep his place. Hagi? He was largely anonymous and perhaps a return for Scott Wright would be a better proposition.

December is shaping up to be decisive. We have gone to Easter Road and snared all three points. Trips to Tynecastle and Pittodrie lie ahead of us, and maximum points there would be a real statement of intent. But games like this one against Dundee are just as important. It could be a banana skin, but we mustn’t slip, eyes have to be focussed on the prize, 56.

Ladies and gentlemen, let the others come after us, we welcome the chase.