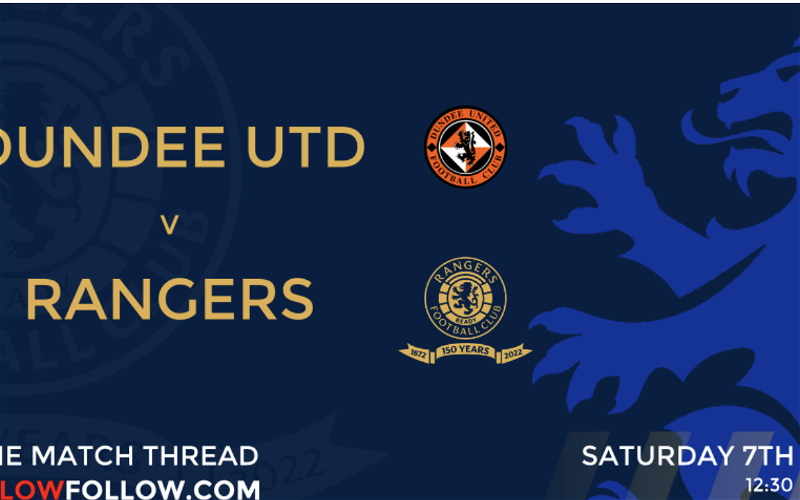 Rangers started with Alfredo Morelos in the line-up despite his recent Covid confinement.  It took him six minutes to get into the game after early United pressure – Joe Aribo supplying the ball into the penalty box in quick succession for him but he was tightly marked and the shots were blocked.

Despite a 5,000 strong all-United crowd (apart from a few brave undercover Bears) the atmosphere was subdued inside the near 15,000 capacity Tannadice.

In the 41st minute Mulgrew was carded for pulling back Morelos.  The resultant free kick for Tavernier was of roughly same range and position as his famous goal last season but this time the shot was high.

Overall, Rangers were pedestrian in the first half – slow to the ball and ponderous in possession.

Rangers started more lively in the second half – a corner from Barasic and then a cross from Kent proving opportunities.  A cross from Tavernier was cleared by a United defender before it got to an onrushing Morelos.  And then a great shot from Tavernier outside the box was well-saved by a full-stretch Siegers.

In 64 minutes a United attack down the left result in a goal – a pass from Pawlet hit off Davis’s knee and an onrushing Robson found himself just ahead of Goldson, who would surely have been red-carded if he tackled, and hit the ball into the net.

Five minutes later Rangers had a corner which saw Tavernier provide a perfect ball for Goldson whose header slipped just past the post.

81 mins – Itten wins the corner in a dual with Robson. Tavernier took the corner and Itten got in the header but it was going wide until Kamara looked to rescue it but the ball played out over the bye-line.

In the 88th minute Barasic launched a long cross pitch ball to Tavernier who took a good swipe at it but the contact was minimal.

The final five minutes of injury time saw Rangers constantly attack with a vigour mostly missing from the regular 90 minutes.  It was to no avail and United ended Rangers’ 40 game long SPFL unbeaten run.