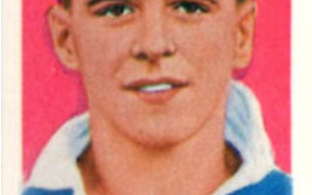 A personal recollection by Gene Randell.
“When chapman billies leave the street,
And drouthy neebors, neebors meet,
As market-days are wearing late,
An’ folk begin to tak the gate;
While we sit bousing at the nappy,
And getting fou and unco’ happy…”
Although I’m saddened to hear of the passing of Eric Caldow (or Cal – doo as it is pronounced in that part of East Ayrshire) I am also happy to have the memory of meeting him on several occasions.
And why the Tam o’ Shanter quote that leads this reminiscence? Simple, my encounters with Eric Caldow were all in pubs in Mauchline where  Burns lived for a time and I’m sure Eric  would have been the perfect “Soutar Johnie” to Burns’ “Tam o’ Shanter”.
In the early to mid 1990s I worked, two weeks on, two weeks off, in Cumnock, the town Caldow originally came from.
I chose to stay in Mauchline a few miles up the road, as the guys from Cumnock that I was training were a bit mad to say the least and they always wanted to involve me in their crazy schemes.
All of them were unemployed and they made money any way the could. This could be by “rabbiting” or by more sophisticated forms of poaching such as hunting for game birds. Then there was the dynamiting of Catrine Dam for brown trout!
These stories are all true and the Galston girl I was going out with at the time, loved nothing better than when I brought her a rabbit, a bird or a couple of fish to cook for our dinner, which I did on an almost daily basis.
I did draw the line when offered a deer, which, I am told ended up being sold at the back door of, and into, the Fewick Hotel where venison would be on the menu for a week or two.
I met Eric Caldow a few times in Mauchline. I believe he was living in Tarbolton at the time and travelled to Mauchline to drink with his pals in Poosie Nansies and The Black Bull.  I met him, usually in Poosies and I loved listening to his stories of his Rangers career of which he was justly proud and which ended just before I started going to Ibrox,  nevertheless, his tales were so vivid I felt as if I had been there and witnessed him in his heyday.
In those days you could still smoke in a pub and the only reason patrons left was to get water for their whisky, which came from a natural spring via a spout on the outside wall of the pub.
I would stand there and listen to Caldow as he and buddies regaled me with tales from past times. True or not, exaggerated or not, they were all well worth the listening.
Often meeting the famous and/or your heroes can be disappointing, he or she can be dull and dislikeable or big headed and brash. This was never the case for me, with Eric Caldow.  Even though I was a constant butt for his jokes, I found him a funny, waggish but mostly an interesting man and a font of wonderful stories about The Rangers and many other topics
A good guy, off to meet his maker, having enjoyed what seems to have been a full life, well lived. I won’t forget Eric Caldow and none of us should – a true Ranger.
“Our dead are never dead to us until we have forgotten them…“
George Eliot