For deeds done and glories won. Thank you Walter. 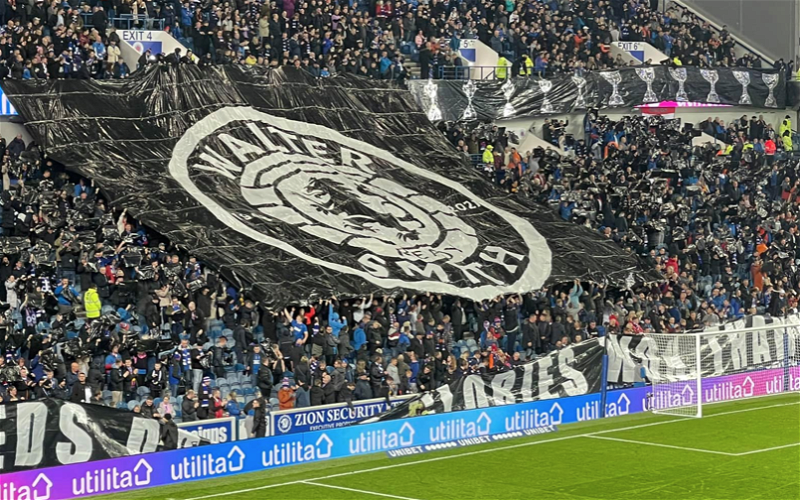 As the torrential rain fell incessantly on my journey to Ibrox this evening I remembered that although the time of year may have been different, the weather was the same when Walter Smith said goodbye to the Ibrox faithful for the final time following the last home game of the season against Dundee Utd in May 2011. The following weekend saw Smith secure the league title ensuring he bowed out of Ibrox for the second time with an astonishing 21 trophies to his name.

The ten years that have passed since Smith was manager of Rangers are without doubt the most tumultuous in the history of the club. The period of rebuilding that followed some of the darkest days in the history of Rangers was completed in March 2021 when Rangers were crowned Champions of Scotland for the 55th time. No one in the world of football will have begrudged Walter Smith seeing his team become Champions once again before his untimely death earlier this week.

In the torrential rain ten years ago it was Smith who was saying goodbye. Tonight it was the turn of the Rangers fans to say goodbye to the man, many referred to simply as Mr Rangers. Outside Ibrox tonight it seemed quieter than normal. The lights still blazed from the burger fans, scarf and badge sellers still offered their wares but there seemed a sense of something not quite being as it should. It felt as if something within the environs of that famous old main stand had moved just ever so slightly.

At either end of the main stand people stood together, it was not silent, but with a gentle hubbub of noise as people exchanged memories of Walter. A Dad told his young son a story of Walter going up to the Copland Road ‘Nutter’ at the end of the season and giving him a small gift to thank him for his support over the season.  It summed up the scene of those standing looking at the carpet of scarves and flowers. Everyone had their own little special memory or story about Walter.

The kids and teenagers who stood outside the gates looking at the tributes looked a little unsure on how they should react. They didn’t know this man and his association with Rangers was before their time. In time they will come to understand and appreciate the greatness that is associated with him.

Even before his death Smith was a legendary figure at the club mentioned in the same breath as Struth and Symon. Those kids standing with their mothers and fathers tonight will tell their own grandchildren of how they went to Ibrox to pay tribute to the great man. They will learn the importance of who he was and what he did for Rangers and be proud to have been at Ibrox this evening.

Inside the stadium as kick off approached we listened to Bon Jovi – Livin on a Prayer and The Beatles – I Want to Hold Your Hand. The DJ had done his homework and this was a Walter Smith inspired playlist.  With five minutes to go before kick off the Union Bears unveiled an impressive Tifo tribute which was met with applause from all four sides of the ground. It was followed quickly by a chorus of Walters Smith’s Blue and White Army and this was still ringing round the ground as the teams emerged.

After an initial roar that uneasy silence once again embraced the stadium as people prepared themselves for the impending minute’s silence. The players came together in the centre circle and the coaching staff of both teams stood along the touchline. The referee’s whistle gave a shrill blast and a stillness descended on Ibrox. It was an opportunity for each and every Rangers fan to take a minute to remember the legend that was Walter Smith.