Pressure is now off for both team, a 5-5 draw is what I’m expecting.

I had a weirdly real dream that it was 2-2

I hope the sheep win, the meltdown on clyde radio will be brilliant

The sheep back to their submissive best, they are an absolute embarrassment when playing them. The bheasts to win by at least 2.

The loser mcinnes will be happy with a narrow defeat.

Aberdeen were the better side in the second half of the last game and drew 3-3 with them at pittodrie. I think they’ll get a point today. We are destined to win this trophy at Ibrox next Saturday.

May 13th 2018, in the last game of the season at Parkhead, they somehow conjured up a 1-0 victory. The cynics might point to the facts that Celtic already had the league wrapped up and Aberdeen came into the game one point ahead of Rangers and needing a win to guarantee second spot in the league as having something to do with the outcome. It is after all the only victory they have had in the last twenty two games against them. Or it could simply have been a coincidence.
Click to expand...

I noticed the celtic fans actually celebrated Aberdeen’s goal too, but I put that down to them just being idiots not knowing their arse from their elbow. After all, why would they care if Aberdeen or Sevco FC finished 3rd? If it was arch rivals Rangers then you’d understand but they insist they don’t exist.

The Sheep are not getting a result today.

The only way they get a result is if the poets turn around and boot the ball into their own net a few times.

To suggest people are obsessed for discussing our rivals fixture today is utterly moronic.

Perhaps you should stick to threads that you do care about.
B

Aberdeen getting something from Celtic? They'll get pumped like they normally do!

I’d expect a routine 3 points for IRA r us.
J

Usual walkover for the unwashed.

Yes, do you know why? Because it’s one thing wanting your arch rivals to fail, it’s another thing to spend ages analysing every potential opponent they have in a competition you own team aren’t even playing in.
I

I will be surprised if the sheep take a point today.
I

All these people saying Aberdeen don’t try is embarrassing. Narrow defeat a few weeks ago and drew with them at Pittodrie
T

I've just come back to this thread and even i'm bamboozled?

Kamberi of course. Thanks autocorrect.

I think we would all love to win it at their place in 3 weeks time. But if you said to me they will drop points today and this time next week we could be gearing up for a party then yes please.

So hopefully come 5pm that is the case. However I'm not expecting much from the sheep.

There's discussing their games and then there's forensic examinations of accounts, posting adverts in a foreign newspaper, resolutions at their AGM regarding us, websites and blogs dedicated to us, actually knowing who our kit man is, having a 108k(thousand) post dedicated thread about us etc.

I've a SPOOKY feeling about this.

cyl1690 said:
This for me! Aberdeen, except on the very much odd occasion, usually hide against them. I think it will turn out a comfortable win for them, now Lennon has gone.
Click to expand...

Is the sheep performance against them anything to do with the mcinnes presser beforehand?
he is always an apologist , praising them or lennon and never bigging up his own team.

two2tango said:
With Lennon gone I expect them to lift their performances a little bit

Aberdeen don’t try v them so putting that together 2-2
Click to expand...

It could conceivably go either way now with their squad. They will know that their wee period is over and that all the decent players want away, there is no manager in place to impress and no guarantee a new manager will want them, so they could well all go into their shells, protect themselves from injury and just really give up for the season. Equally, they could get a lift from not having to interact with a chimp in a man(ish) suit and lift their performances.

Me? I could not give a shit either way at this stage.

Celtic to win by 4 and spark talk about how they’ve turned a corner and they’d be in the hunt for the league in Lennon had resigned a earlier.

If you want to make some money, they are 1/2
Aberdeen don't even try at parkhead.

Will tune in for the last 10 minutes if they look like dropping points just to see the look on their faces. If they win it I’ll just go about my day blissful in the knowledge that 55 is secured

Recoba said:
They are raging with the war hero's first team selection

Hope the sheep turn up and rattle the bastards as I want us to win this by as many points as possible. Doubt this will happen though and probably best they can hope for is a draw.
C

Kamberi with a double today and 2-1 the Sheep.

He was unlucky last time out and looked desperate to notch against them. I think they will implode further with Lennon out and Kennedy in. Those players couldnt be arsed playing for someone with a lot of weight at the club. What chance does the Brave One have with his career highlight being that he got injured early in his career.

Recoba said:
They are raging with the war hero's first team selection

Those expecting a different performance from them than usual should turn their minds back to how we played when Kenny mcdowell took over from ally. Warning. Only do this if you're not easily scarred

They will win comfortably today like they normally do against Derek the shitebag.

Honestly for the first time I couldn’t give two fucks

Who is the shit Michael Schofield from Prison break in the photo?

Thats one unfortunate coupon, who is it?

The match thread on KDS is all full of optimism and plans until that team was announced. Right fromt the first reply... 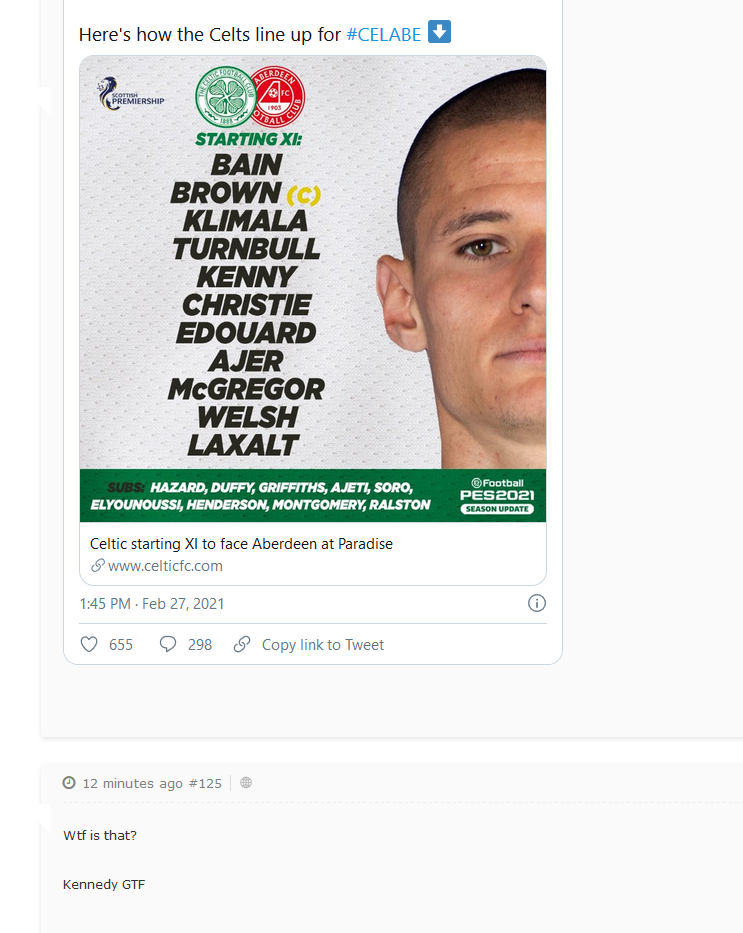 What fucking order is that team in.

Started with the B's, thought it may be alphabetical, which would be weird enough.

Have their fans got so little to look forward to this season that they make a game of guessing the formation from a random line up?

Not that I need any more reasons to hate them but I hate the way they announce their team. Do it in formation, not whatever the %^*& that is

Was under the impression that the game was at the Scumhut.

I do hope that Kamberi and McCrorie have a good game, preferrably either of them scoring the winner.

cloodie said:
The match thread on KDS is all full of optimism and plans until that team was announced. Right fromt the first reply...

They could put out their under 14s team and the sheep would bottle it.

cloodie said:
The match thread on KDS is all full of optimism and plans until that team was announced. Right fromt the first reply...

I'm not being funny, but what the fcuk were they expecting? Look at that bench?

Its not like he doesnt have a lot of shite to pick from.

Fucking Colin Montgomery on the bench.

TPP said:
Honestly for the first time I couldn’t give two fucks
Click to expand...