So Mote It Be said:
Was fortunate enough to meet him on a few occasions.

Even in the first team dressing room after training one day, which was a privilege.

He was a phenomenal goalkeeper.

Best on the planet at his peak probably.

And do you know what I really loved about him?

He didn’t give one single fuck about how people judged him - he was unashamedly proud of who he was & what he stood for. Never batted an eyelid.

But we love(d) you more Goalie.

Be happy and free wherever you’ve gone.

RIP our legend. With his gaffer, one of my all time hero’s. My wife (no pics), when she was 16 stood outside Ibrox for pics/signatures and Andy always gave up his time and was the kindest, friendliest man. X

You will never see a better goalie than THE Goalie

Very sad that he has passed. Eternally in our hearts
O

First person to deny God one on one. They are considering changing Jesus saves to ”The Goalie” saves.

Can only thank Andy for the memories, his performances in the big games were outstanding. He Is likely the best goalie we’ve ever had. Thanks for everything Andy.

The Goalie and the gaffer please don't take any more.

Was talking to Andy the day of the europa Cup final he knew he was terminal but really upbeat says a lot about the man.
K

The Best Ever
V

"Nobody does it better"!

Another legend gone. What memories you gave us, Andy.

"Nobody does it better"!
R

Rangers and Scotland's greatest ever goalkeeper. And the best in the world at his peak. RIP The Goalie.

He embraced everything Rangers stand for. The Goalie will never be forgotten.

I really don’t know where to start with this and am at a loss for words. Although we all knew Andy didn’t have long, when I read the news of his passing this afternoon, it still hit hard.

I grew up with the 9iar team and although I was never a keeper, in the playground whenever I drew the short straw and had to go between the sticks, I was always Andy Goram. A childhood hero, up there with Cooper, Souness, Gough, McCoist, Laudrup & Gazza who made me fall in love with football but most importantly our great club.

I’ve just watched his video on YouTube and the memories came flooding back. I remember being at one game in particular during the 97/98 season away to Aberdeen. The game finished 0-0 but was worth the entry money to see Goram and Leighton going head to head - the whole game they tried to outdo the other with a string of great saves. And then there were the old firm games …

I was lucky to spend some time in Andy’s company for a short spell too, and a more thoughtful, generous and kind human, you’d struggle to meet.

Thoughts and prayers with Andy’s family.

So sad these 2 legends are gone , they would have had some memories.

That was in Jersey.

The best Goalkeeper I ever saw live and for a time, the best in the world.

Such sad news, a charismatic and enthusiastic member of the Rangers family right to the end. Rest easy Andy
I

RIP Andy The Goalie Goram . One hell of a keeper and Rangers Legend

So so sad, Andy Goram, rest in peace, now with Lord Walter of Ibrox

Condolences to Andy's Family and close friends, and to every Rangers Follower, we will never forget Andy

Thanks for the memories.

You're not in pain anymore, rest easy.

I’m gutted about the Goalie, it’s difficult to process it even though everyone knew what was coming.

I’ll tell you what, you show me a better goalkeeper on earth at the same time when Andy Goram was at his absolute peak and I’ll show you a liar and hater. No one was better than him on his day, and if he played now? Christ knows what he would have been worth but it would have been a fortune!!

The man was a true legend, a true club great. His legacy will carry forever, no doubt about it.

As a kid, I only stayed along the road in cardonald and when it was school holidays and summer time I would go down to Ibrox with my pals so we could see who we could meet. One day, it was around 1995, it was a roasting hot day and I stood with my big pal just waiting to see who would turn up. A lot of players would kind of try and rush in without stopping, but the main guys who would always stop would be big Goughie, Bomber Brown, Stuart McCall etc. I wanted only one man’s photo at the time, big Hateley but he didn’t like stopping usually! Another who’s photo I coveted was Andy Goram. My wee brother was a keen goalie himself and he was being trained at football schools by Alan Hodgkinson at the time who was Gorams coach. Mr Goram stopped by when I asked him how he was doing and if he wouldn’t mind stopping. He couldn’t have been any nicer, I told him my wee brother was a goalie himself and that he wanted to be Andy Goram! The goalie simply said “good lad, tell him to stick at it and he will get there” that was good enough for me and the wee man was delighted when I told him!

My mum still has the photo at home in a photo album, of me and the goalie. It’s the only one I have left from my old days of hanging around looking for autographs!!

Rest in eternal peace, Goalie. You bloody earned it!!

Saddened by this news.
I will always remember his display in the away match v Leeds. He made those saves easily. One of the best ever.

chickenhawk said:
Saddened by this news.
I will always remember his display in the away match v Leeds. He made those saves easily. One of the best ever.
Click to expand...

He's the guy I think of whenever anyone talks about great keepers. Felt a man up when he was in goal

My favourite player growing up - genuinely world class and could have played anywhere in Europe. So glad he didn’t though. RIP Goalie

Being a 90s kid, Andy Goram was symbolic of everything that is magical and unpredictable in the game. You honestly felt like he could save a toe-poke from the Hulk.

We were all out yesterday having a beer in the afternoon when I got a txt that the Goalie had passed away.
All the lads were laughing and joking as soon I told them the news ive never seen so many men laugh to utter silence.
I suppose that is the regard in which we held him.
Goalie you are a LEGEND no ifs no buts!
Sleep easy.
Last edited: Jul 3, 2022

I heard that some of the Orange went over to Ibrox after the Walk and played a tune for Andy.

Respect to The Goalie
One of us
RIP Andy.

Such a loss so young. Cried when I read about it, he is a legend. 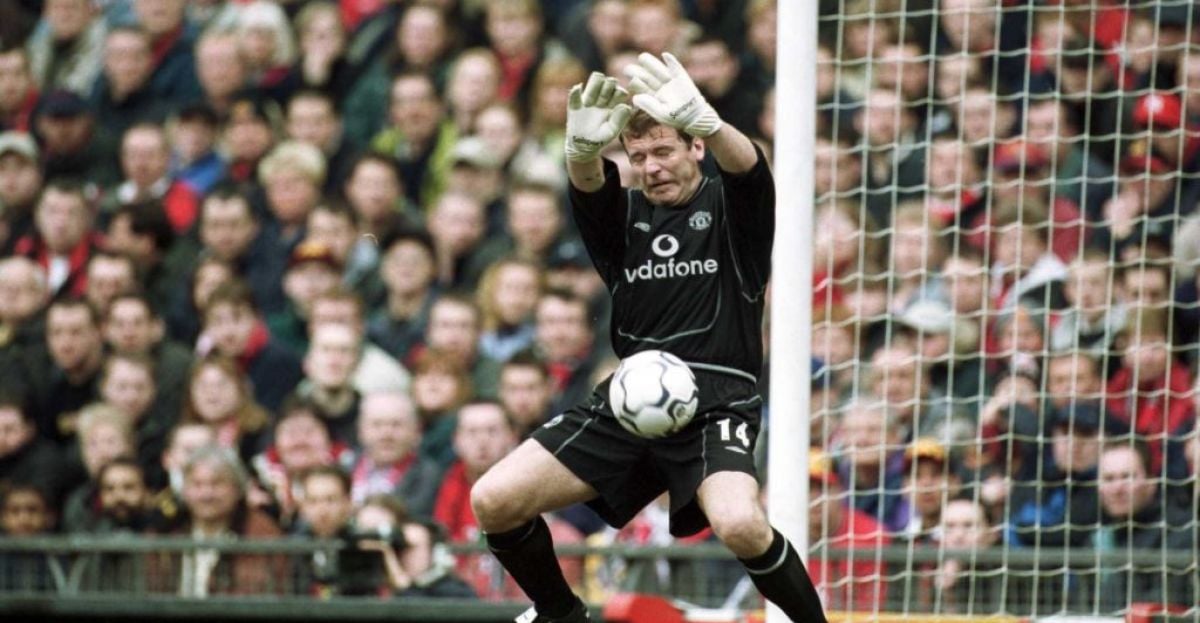 Andy Goram and his bizarre spell with Manchester United

Some transfers in football both capture the imagination and defy logic. Andy Goram to Manchester ...

TPP said:
Symbolic of one of our greatest teams ever. It’s hard to explain to those who didn’t live through it but for a couple of years, when a striker went through on goal you didn’t get that nerve or panic. Totally relaxed and confident the goalie had it.
Click to expand...

There was another aspect to his goalkeeping. The passback rule was made for him.

How many games did we watch an opposition goaleeper get the fear at receiving a passback.

It was a skoosh case for Goram he was an absolute natural. I think he played centre forward in a previous life.

Not sure if it's been mentioned but one of my non-playing memories of the Goalie was when we played Viktoria Zizkov in the UEFA Cup. He was commentating for the Rangers website radio. As we were throwing absolutely everything at them towards the end of the game, their keeper made a ridiculous save (may have been from Klos of all people) and Andy screams "how the f*ck did he save that?!"

An apology was issued the following day I think and he never did much commentary again.
N

At his peak, Andy Goram was the best goalkeeper I’ve ever seen, I’ve always held that opinion. Had many an argument about it too.

So many incredible saves, Pierre VH obviously, but he made a double save from Larsson which I rate the second one as better. First one was amazing, we half cleared and it came back in, second was breath taking. Sorry don’t remember the game.

Thank you for the memories
A

Pirlo said:
Player wise this is probably the first real hero of my era to go, and although he was only 58 and of no age at all, it’s still one of those things that makes you think about your own mortality too.

It’s really gutting, to me - 9 in a row honestly doesn’t feel like that long ago, so to lose Walter, Goram and Jimmy Bell within a year is actually really hard to take for so many reasons. But that’s life, if you never experienced these lows then you also wouldn’t get the experience the extreme highs that come from having idols and sporting heroes.
Click to expand...

Although I am from the generation just before you, that was my first thought when I woke up yesterday morning. So many of my first heroes are gone; Sandy, Bomber, Big Tam, Coop tragically too, but this felt so different. This is the 9 in a row legend, and that was only yesterday it seemed. Heart breaking.

Thanks Andy for being the greatest #1 of my 50+ years at Ibrox. You will remembered forever like Jerry Dawson, Bobby Brown and Billy Ritchie before you. Legends are never ever forgotten at our club

Comfortably the greatest British goalkeeper of the past 50 years.

He was better than Seaman, Shilton, Jennings etc. By some distance.

Sitting reading this thread and Tina Turner's Simply the Best has just came on Magic Radio , very moving and great timing.
Andy , you were the best , thank you.

The best keeper I have ever seen, RiP Goalie.
I

Its All About The Rangers

I watched him play for years and I still honestly cant believe he has passed. we have lost too many too soon

Andy Goram was a feature of my Saturday afternoons for 7yrs and the reassurance you got when you heard his name called out was a measure of what he brought to the side.

As was said on H&H, we do love a player who turns it around from a poor start, and Goram turned it around tenfold.

I listened to him speak at an event last October and his view of the demands of playing at Rangers and what you had to be and do before you can really regard yourself as a Rangers player spoke volumes of his understanding of this club and of what makes the supporters tick.