I’m sure good looking millionaire and record SPL goal scorer Boyd is panicking about not being allowed into Dens Park, Dundee

Thought they couldn't get any lower than their spam inbox email stint but defending that waster is something else.

MiseryHatesCompany said:
Sod all to do with feelings, the bear pit is public and I'm sure admin don't want the board in the media for allowing terms deemed sectarian. It's to protect users.
Click to expand...

I know this, I’m sometimes just snarky in the morning.
G 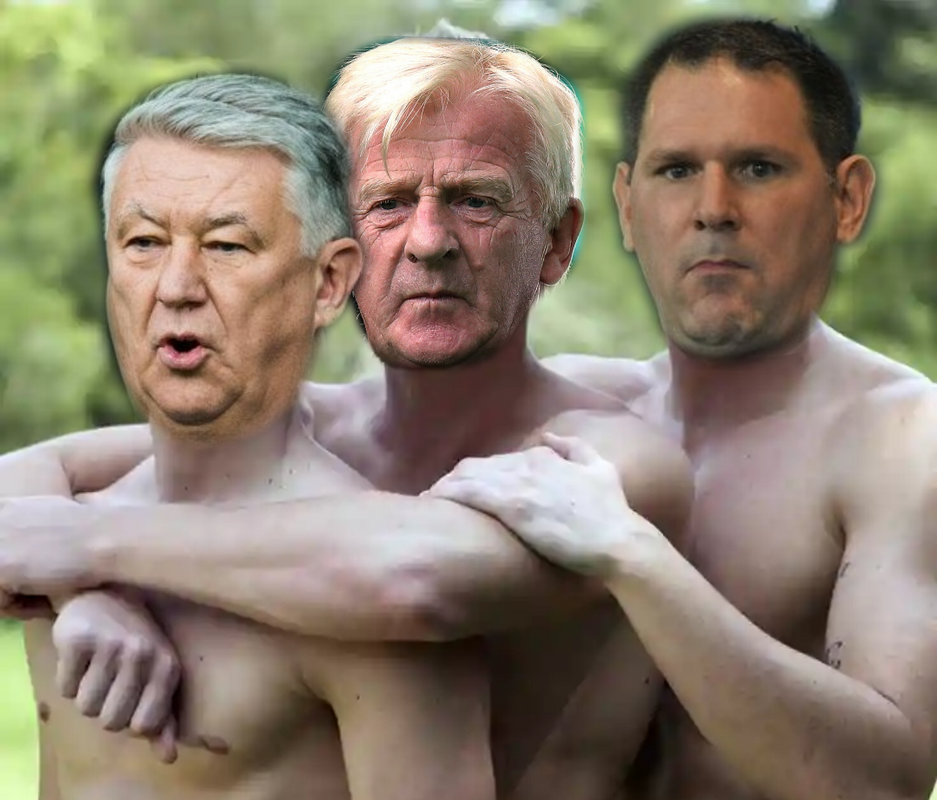 fukcin hell am I the only one that finds this disgusting.

RaskolnikovBear said:
I know this, I’m sometimes just snarky in the morning.
Click to expand...

happens to the best of us. lol

The Decision has been made.
If Peter Lawwell says he's banned then he's banned. 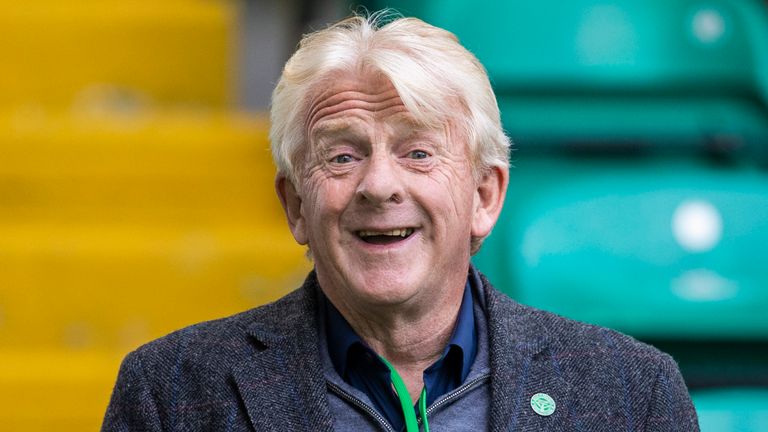 What a horrible little goblin.

Manhattan_Loyalist said:
What’s the betting the anti Irish racism angle is pushed due to the tri colour comment
Click to expand...

Given he's Scottish that'll be a stretch.

It's never stopped them before.

Beer Belly Loyal said:
KARMA has a way of catching up with people.

Leigh Griffiths is about to find that out the hard way at Dens Park.

He was laughing when he tied that Celtic scarf to one of the goalposts at Ibrox a few seasons back.

Grinning from ear to ear during an Old Firm game the day he waved his Irish tricolour from the Broomloan Road Stand.

When he wiped his nose on a Rangers corner flag he thought he was being clever.

Well, let’s see how smart he is when Rangers supporters tell him what they think of him.

Griffiths is about to get bombarded with 90 minutes of relentless abuse and if he’s got a brain in that head of his he better be prepared to take it.

Listen, I’m not going to go into the reasons why supporters all over the country are going to give him a hard time this season. Frankly, I want nothing to do with it.

But what I will say is that Griffiths only has himself to blame — and the sooner he realises that the better.

Will he, though? Is he capable of accepting responsibility for anything in life? I’m not sure he is.

It seems to me that every time something happens to him he thinks it’s someone else’s fault.

He wasn’t to blame for how things worked out for him at Celtic, was he? No, that was all Neil Lennon’s fault apparently.

Honestly, I can’t remember reading anything as ridiculous as when Griffiths spoke about Lennon recently and claimed his ex-boss was just trying to stay relevant by talking about him. Really?

Are we talking about the same high-profile Neil Lennon who has been one of the most talked about personalities in Scottish football in the last 20 years?

Griffiths can’t surely be serious when he says Lennon needs him to stay relevant.

But that sums him up, doesn’t it? Rather than owning his mistakes and taking responsibility for them, his default position is to go on the attack.

If only he was as threatening on the park.

Because when you strip everything back with Griffiths, he’s not the player his fan club will have you believe.

Is he a good finisher? Sure, I’ll give him that. But in the last three seasons do you know how many league goals he’s scored? Let me tell you because I looked it up. It’s 17.

I’m sorry, but that’s not the statistics of a top-level goalscorer.

This is someone with natural talent, sure.

But that’s not enough if you are to be considered a top player.

Yet his cheerleaders are forever making excuses for him, constantly telling anyone who’ll listen that Griffiths would prove everyone wrong.

That he just needed to get fit and he’d be back.

Griffiths ended up saying it himself but it was total and utter nonsense, every single word of it.

Griffiths is yet to score for Dundee

Griffiths has had more than enough time and opportunity to get himself in shape and he’s only thrown it back in people’s faces.

The scoring records in Scottish football should have been OBLITERATED by him in the last five years. Instead he put the tools away and it seems like he couldn’t care less.

Why Celtic gave him a new contract in the summer, I’ll never know. For the life of me, I’ll never be able to work that one out.

Even their supporters must have been scratching their heads.

Those fans slaughtered me for criticising Griffiths and more or less saying it takes more than just ability to play at a top club.

But while my wording could have been better I think I’ve been proved right. When he scored at Rugby Park one day he looked up at me and made a shooshing gesture, but I stand by every word. He’s not exactly silenced me since, has he?

Now he’s at Dundee I wonder if his manager James McPake is beginning to wonder if it was a good idea bringing him to the club.

They’re pals from their days together at Livingston so I can understand why McPake was prepared to give Griffiths the benefit of any doubt.


But since he signed, Dundee have yet to score a goal.

Listen, I’ve been there. I got abuse every single time I stepped on to a football park and had to take it. It’s part of the deal.

Okay, the shouts weren’t anything like the abuse Griffiths is getting but he’s 31 now and should be experienced enough to know how to switch off from it.

I just look at him and see someone who is more or less finished. Truth be told, he’s the way I was when I was at Kilmarnock and hung up my boots a couple of months before my 36th birthday.

I didn’t have the same drive to stay in shape so I realised it was time to hang up the boots.

As a striker you stand the best chance of playing every week, because it’s a specialist position. But you need to deliver.

Griffiths just hasn’t looked like delivering for a long time now. His decline is there for all to see with his scoring record miles off where it should be.

During the warm-up before the Dundee derby at Tannadice last weekend we were in the gantry preparing for kick-off when a ball flew past.

We were nowhere near the goals so it was obvious someone was deliberately trying to hit us.

I didn’t see who was responsible — but my money would be on Griffiths.

When you read the article back, he's not said anything meriting a ban, certainly not from Dundee's perspective

He's actually been very tame. He doesn't mention the paedo tendencies, the racism, the shop lifting.

He hasn't said anything false.

There really is no grounds for a ban other than, we don't like that

Its in no way comparable to the grounds for complaint Rangers have with Sutton and Lennon
Last edited: Sep 28, 2021

Supposedly he has not been banned. Sky confirmed this.

BVTCHER said:
Confuses me as well, somebody will no doubt take glee in explaining it.
Click to expand...

Official Ticketer
We are now on Tuesday.

No comment whatsoever from the SPFL or the SFA about the flare incident last Wednesday.

Are we to just accept that Griffiths is getting off with it?

I got the info thanks, no need to be nippy.

Did griffiths actually get charged by the compliance officer?

BVTCHER said:
I got the info thanks, no need to be nippy.
Click to expand...

No need to be fishing either. 20 odd posts in 4 years and you pop up to post that. Away you go.
O

Banned after that game maybe?

I actually didn't think that Dundee could be anymore of a small minded wee diddy club. Delighted to be proved wrong. Relegation is only a Xmas away.

Woody83 said:
How many wains did he abuse
Click to expand...

He's so tiny he couldn't abuse anyone if he tried. Kids would beat him up

Nope. Some of the people involved with Scottish football are an embarrassment. Naked pictures together now. Not in our day grandad!
V

TNT said:
We are now on Tuesday.

No comment whatsoever from the SPFL or the SFA about the flare incident last Wednesday.

Are we to just accept that Griffiths is getting off with it?
Click to expand...

Think about what Kent, Halliday and Alfredo got banned for?

The Goalie said:
After his column on Griffiths at the weekend.

I'm sure Boydie will cope. 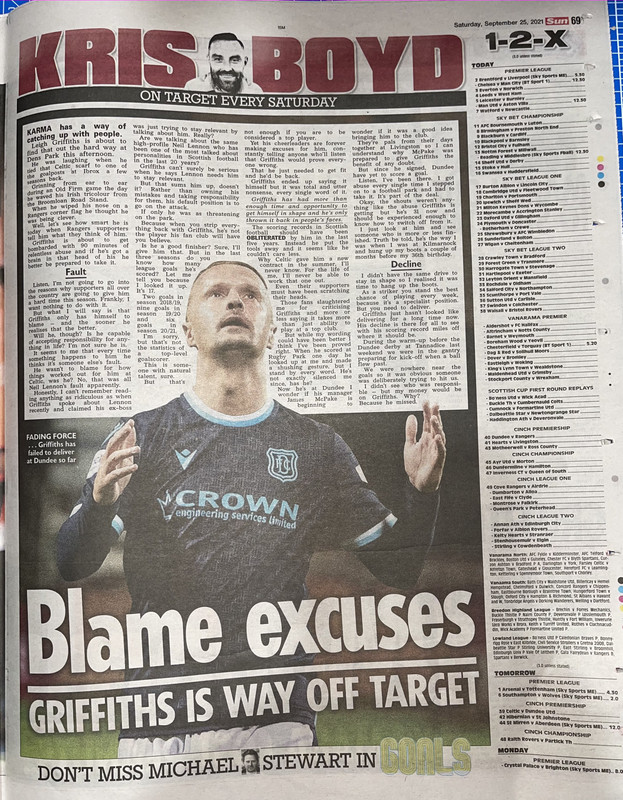 Except that he wasn’t. He was in Dens park reporting for Sky. More Daily Record rubbish.
O

simply_the_best said:
What's the ban for?
Click to expand...

He wasn’t banned. How many times!!! He was in Dens Park reporting for Sky!
B

Coopers left foot. said:
No need to be fishing either. 20 odd posts in 4 years and you pop up to post that. Away you go.
Click to expand...

Your first reply was an absolutely pathetic attempt at Trolling. I wasn't fishing, I had no idea what the meaning of poet meant, the same as the guy who posted before me, he asked the same question, you never jumped on him. The face of a man who’s just been told he now has less visits to make to Dundee.
Click to expand...

JD1872 said:
Did griffiths actually get charged by the compliance officer?
Click to expand...

6 days on from the incident. 4 days after plod charged him.