Official Ticketer
Did they investigate these Partick fans? I wonder how Clyde will tweet about our celebrations.
Our police force is being used more and more as a political tool for the SNP to use against us. Some on here will be delighted with that. 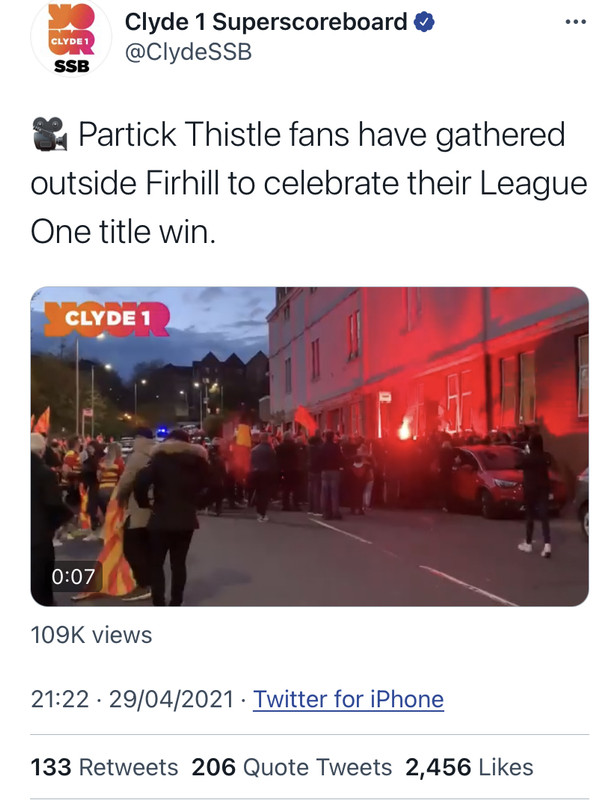 Official Ticketer
I read an interesting article recently about the UK government still continuing to ration food well into the 50's after the 2nd WW.

It appears to be quite common for leaders and governments to stuggle to let go of extraordinary powers and control which is afforded to them during major events.

The common theme being that they struggle to know when to release their grip and usually this is done far too late.

The worry is that the same will happen after this pandemic.

I genuinely think that we're already seeing signs of this from the government, but also from the police, and worryingly I think this is only just the start if it.

People will say this is only because its us involved, and that is probably true, but my worry is that the police will have got very used to the powers given to them and they will also struggle to let go of them and give people their freedom back.

This to me is a sign of that very thing, its people setting off fireworks ffs!!
I

In Walter We Trust

POLIS can join the rest of the ROCKETS. Officer " howes your enquiry goin"? " Dunno it's all up in the air"!

Warm yourself by the fire of their hurt.

They need a real job.

They don’t do that either .
Catching motorists speeding is the real crime focus in Britain

You’ve got to admit, they don’t do subtle fo they. The bias is obvious.

Launch a probe! Was that a mini rocket? FFS give us peace you kill joy wankers! Away and probe proper crime!

oldblueeyes said:
They don’t do that either .
Catching motorists speeding is the real crime focus in Britain
Click to expand...

Lazy Bastards. Outstanding crimefighting techniques by holding a fucking speed gun and pointing it in the right direction. Only downside must be sitting on their fat arses doing the paperwork.

Had a mate in work the other day - one of "them" - who was going Tonto saying he can't imagine having this year after year after year !! One Season of misery they've had, let's hope we get to heap it on for years and years to come !

Livingston Police are absolutely useless, I think all the rejects from Glasgow and Edinburgh get put there. They probably have to look up what investigation means first.

I see the crowd at Parkhead was not moved on last night and Brown even went out to wave goodbye to the fans, walking along the mentally challenged barriers waving at them.

glasgowguy87 said:
They aren't even hiding it anymore. Compare and contrast to the piggery earlier

Looking forward to the headlines on Sunday morning.

Looking forward to the headlines on Sunday morning.
Click to expand...

Bears on the hook as per.

Nothing funny about the police
although they are a bad joke.

QueensferryCR3Bear said:
I see the crowd at Parkhead was not moved on last night and Brown even went out to wave goodbye to the fans, walking along the mentally challenged barriers waving at them.

Tbf they've allowed our fans to gather at Ibrox this season. Not moving them on is the sensible thing to do, provided they aren't there to cause trouble.
T

I don't live in Scotland so forgive me but what laws have been broken?

As for this probe this is simply the police being seen to do something as they know some politician will moan about it. Its a shame there's so much politics in policing these days rather than just letting them do their jobs. As rightly said crowds will gather on Saturday the officers on the ground will assist this because they don't want to be getting involved in a full scale riot

Gary said:
Livingston Police are absolutely useless, I think all the rejects from Glasgow and Edinburgh get put there. They probably have to look up what investigation means first.
Click to expand...