his article today has literally blown my mind. Has an outright pop then he uses this 'photo' & I use the term photo very loosley...


Talk about trolling us?? 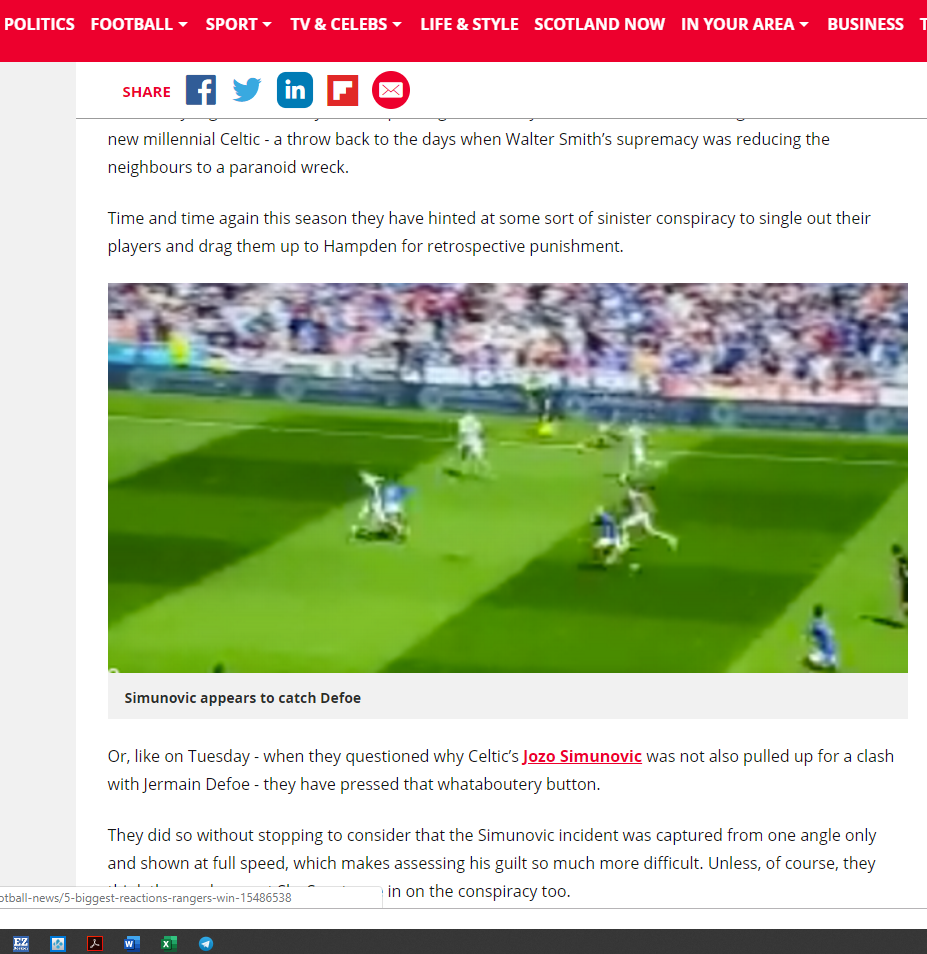 Jackson has shown once again how insignificant he is. Trying to wind up our support and club to get anyone to read his poorly written column.
There's a bigger story out there Keef.

Keef has lost all his contacts within ibrox and its driving him mad, he comes off as a bitter little man, hes not relevant and has lost all reasonable sense when talking about us,,, i wish people would stop buying or even quoting from that rag

What on earth is he talking about?

Is he saying the panel are only allowed to look at what is actually shown on the day or Sportscene?

It would've been captured by more than one camera and can be slowed down if needed.

But if it is what he implies then it is more evidence of the trial by Sportscene farce.

Ah, that old Whataboutery word again, when it doesn't suit your agenda.

Whataboutery you fucking off Keef!

I’m not good at the copy and paste thing, but his column is having a go at us cause we dared question the football authorities over the Flannigan elbow ban! He must have rubbed his hands at the statement we put out to feed his moron readers! I’d normally not bother mentioning this, but he’s pissed me right off! Does he ever have a go at them when they do the same?

How many times have our players been cited in comparison to theirs in recent times?

Did not see the other thread. A pissed off bear got in before me. Please delete.

It's not what abouttery when questioning the logic of why the semantics of one decision is different to another.

That's like saying you can't question the logic behind one murderer getting 30 years and another 20 years.

So this looks like to me he, has been talking to the corrupt rat's, that came up with this decision not too ban simunovic

“Whataboutery”. I f#cking detest that term.

When defending yourself, you have to bring up evidence from previous incidents to highlight your own innocence.

If the SFA has acted fairly in the past then we would accept Flanagan’s ban. However, they have made this mess themselves. Overturning Bachmann’s red card at Ibrox, missing various Scott Brown elbows/kicks off the ball and now Simunovic on Sunday.

Even with that one angle at full speed, Keith, you can see clearly Simunovic elbowed Defoe.

You and your so called ‘journalist’ buddies are part of the problem with Scottish Football. If you called out everything fairly and put pressure on the governing bodies we could see change for the better in Scotland and make it a footballing nation to be proud of again. But no, you won’t do that just to benefit one club, a club who have tried to cover up the biggest scandal ever seen.

Something you still won’t talk about.

Whatabootery, the go to defence of someone who has no argument to counter the subject. It also means that if you don't get your point in first you then have no right to argue back.

Hurleyreyes said:
What on earth is he talking about?

Is he saying the panel are only allowed to look at what is actually shown on the day or Sportscene?

It would've been captured by more than one camera and can be slowed down if needed.

But if it is what he implies then it is more evidence of the trial by Sportscene farce.
Click to expand...

This is exactly what Stuart Robertson complained about and even mentioned that fact of what is or not shown in that interview a couple of months ago.
As posters have mentioned Sky could pick up the mutants picking their nose and frothing at the mouth if they wanted to.
Keef must be trolling he can't be that thick can he?

Any other manager / club calls out refereeing and you don’t hear a peep from this pizza faced rodent.
Our players booked for an elbow to the chest, theirs isn’t for an elbow to the face, our players then re-refereed and banned (against FIFA ruling), theirs isn’t (within Fifa ruling), and we ask why and this what you get from him.
Is there any sports writer left out there that isn’t on their payroll?
A

That’s what happens when your on the outside looking in.Keech has become a chief hater.

Whataboutery - a made up word to deflect from inconstistency

A wanker and awful journalist ( term used very loosely) who writes for a tarrier fanzine.

Ignore the rat bastard if at all possible.

Official Ticketer
So he's admitted it is trial by Sportscene? "

Jackson and his ilk routinely expose themselves as part of this ‘conspiracy’ by failing to ever provide balance to their one sided attacks on the club.

Rangers grievance over Simunovic escaping punishment for a similar crime to the one Flanagan copped a ban for is perfectly valid and failing to even acknowledge that completely devalues anything he has to say on it.

Like Spiers, English and one or two others, Jackson is so consumed by his hatred of Rangers that he has long ceased to register as a valid voice within Scottish football journalism and he’s delusional in the extreme if he believes his whiny half baked drivel is even read by the people at the club he’s so desperate to be acknowledged by.
G

Vote For Pedro said:
I’m not good at the copy and paste thing, but his column is having a go at us cause we dared question the football authorities over the Flannigan elbow ban! He must have rubbed his hands at the statement we put out to feed his moron readers! I’d normally not bother mentioning this, but he’s pissed me right off! Does he ever have a go at them when they do the same?
Click to expand...

Can anyone find Dr Deaths statement about the Mhanks being cheated for decades?
Think it was after the Dougie Dougie witch-hunt.
They’re great at witch-hunts....when it suits them

Exactly mate. Pair of 'see you next Tuesday', the two of them.

whataboutery is a variant of the tu quoque logical fallacy that attempts to discredit an opponent's position (in our case a perfectly entitled question to the governing body) by charging us with hypocrisy, but without directly refuting or disproving our argument, which in Scotland is particularly associated with a scottish media propaganda.

Jackson is a no mark impostor of a compliant media hack. No credibility. Needs to spout spurious info to get attention and panders to the Fat Jap. A Rangers hater and one of life's failures. Twat.
W

Both fairly similar incident at the same end of the ground.

Aye he's right the para is ripping out us

Keeeeech is employee to seek newspapers

He is detached from his own job

That Pic of the Simunovic elbow though.... potato vision.

Jackson reporting on the biggest topic in Scottish sport

Desert Loyal said:
his article today has literally blown my mind. Has an outright pop then he uses this 'photo' & I use the term photo very loosley...


Talk about trolling us??

He’s a fucking tube, he will write an article in response to any Traynor statement. Cause Traynor got the job he thought he deserved.

The full article for those interested, think he is having a go at Traynor.

It might be a good idea to let him call the shots from this point on.

fedor said:
Whataboutery - a made up word to deflect from inconstistency
Click to expand...

I don’t care what they label it as and I’m sure the powers that be at the club feel exactly the same.

We’re not going to suddenly stop pointing out glaring inconsistencies and bias for fear of Keevins and Jackson screaming ‘whataboutery’.

Staff member
In his mind he is still pursuing his vendetta against his old boss Jim Traynor who now works for Rangers. That’s what it is all about. Obsession.

Staff member
If I was Keef and caring about integrity in Scottish football then I would be considering thef ollowing.

The Daily Record yesteeday published more stories than any other paper on the child abuse tragedy - seven pages in all - and yet, unlike the other papers, they did not use Celtic in a single headline. That must have been a decision taken at editorial conference level. No doubt.

Scandalous and could perhaps be added to the conversation. If those Rangers fans who still buy it needed a reason not to there it is , and right in front of them.

Official Ticketer
Credit where credit's due. That's two articles he's written now without mentioning Dave King (perhaps' he's had therapy to get our Chairman out of his head).

On this article though he is completely missing the point.

"They did so without stopping to consider the Simunovic incident was captured from one angle only and shown at full speed, which makes assessing his guilt so much more difficult. "

Is this guy for real, he really thinks they cant slow it down themselves when watching it?

Jackson is also a self-appointed Scott Brown bum-boy. As expected, not a word in the article above about how Brown dived.

The 'photo' sooo blurry and you can still see a straight, white line, that's an arm pointed directly at Jermaine Defoe's head.

If you have a twitter account you need to tell this mushroom how much of a hack he really is.