Scott Bain is a goalkeeper this clown didn't even fancy at Hibs, ffs.

Just to point out, when Mowbray was sacked he'd won 5 of his last 9 games. Lennon is currently looking at 2 from 9.

I've got shares, DVDs and all sorts of memorabilia and right now I wouldn't give Celtic the steam off my piss. Defund the carrot until things change.
Click to expand...

Disco Deejay said:
All four Hoops stars have entered the last 18 months of their respective contracts, with the quartet having a combined market value of £92m.

Football Insider claim Celtic wanted £40m for Edouard over the summer and £20m to part ways with Ajer. Christie is also valued at £20m, while Ntcham was rated at around £12m earlier this year.

Once you stop pissing yourself laughing, it's difficult to know where to start with those figures.

The fact that they are putting Benidorm Barbie into a Goddess like status, suggests to me that it has already been agreed that he/she will sign in January, which will keep the manky hordes happy, most likely as a swap for Ajer.
Click to expand...

Even if they had 2 years left on their contracts, they wouldn’t be worth anything near that.

Now in the real world, they are entering the last 12 months of their contract before they are sold in the next window (if at all). Their European results in Europe will be seriously damaging their value.
The club is in open turmoil and are constantly embarrassed on the European stage. They don’t want to be hanging around for that again as their personal image and value as a player will be getting reduced.
I can see them pushing for a transfer this window and if not getting it, keep pushing or simply watch their contract finish up.
I can see a good bunch of them going for nothing with 6 months left on their contract.

Craigan- "Celtc are the better team."

Sparta manager's after match interview, "can we play this mob every week"

Forth Bear said:
This is glorious.

Its an old vid, I posted it earlier as well thinking it was new!

Did the electrician score any goals against them tonight?

They are absolutely fucking shite. We simply cannot lose the league to these amateurs.

Shame we playing soon this will be so good tonight.

BroomloanWATP said:
Did the electrician score any goals against them tonight?

They are absolutely fucking shite. We simply cannot lose the league to these amateurs.
Click to expand... 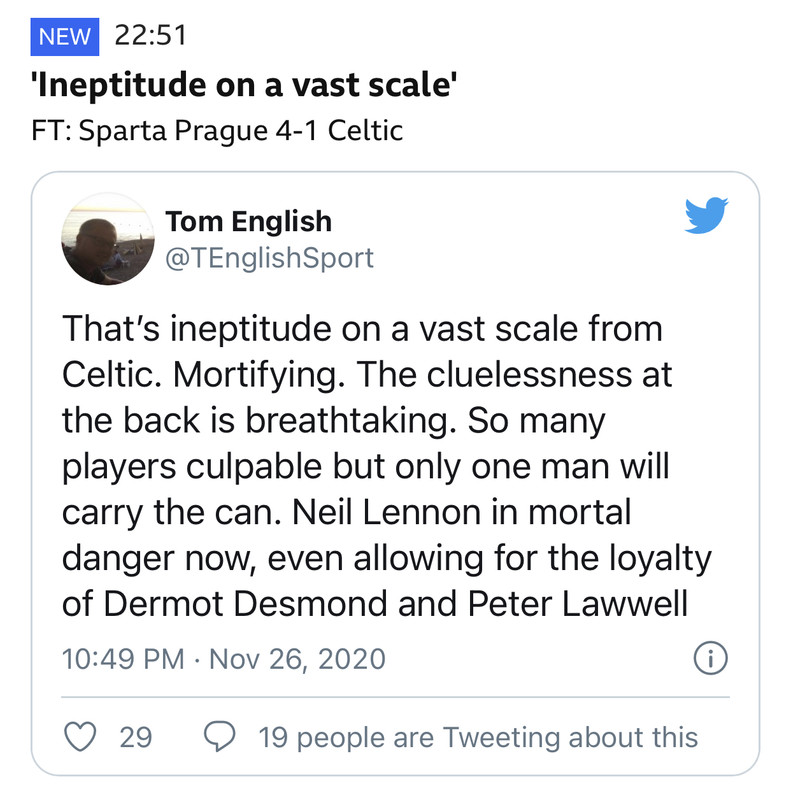 Angus Og said:
Hmmmm. Someone from celtic sneaking into a kid's house, you say?
Click to expand...

Child teaches Lego how to read.

Get him signed. Loves a goal against them.

Lennon just needs more time and lots more money. Fritzl, fat Pete, I implore you to back your man.

Hartson greeting - unreal. What will he be like if we win the league?

Marvellous Marvin said:
Hartson greeting - unreal. What will he be like if we win the league?
Click to expand...

Still sitting in disbelief that sandaza isn’t on the park

Craigan is a complete muppet.

We’ll roll over the top of that rabble at Ibrox.

I'd 8-2 be the one who points out to Timmy their aggregate score v Sparta.

Celtic love a bit of fourplay.

BroomloanWATP said:
Did the electrician score any goals against them tonight?

They are absolutely fucking shite. We simply cannot lose the league to these amateurs.
Click to expand...

How many broken TVs and remotes?
How many children unable to watch peppa pig cos daddy liam has fucked the tv?
How.many Bernadettes with sore faces


All because the deranged mutants watch our games?!?!?
Can never get my head round that, I wouldnt dream of watching that shower of shite, unless it's against Rangers ...tarriers....the cabbage gift that keeps on giving

That’s one of the better ones that!!

Official Ticketer
I will pop over to KFS after our match and come back with a selection...the anger will be delicious.

Like this one about playing us
"Thank god we don't play them soon. We'd probably need the Duckworth-Lewis method to keep it respectable. "
B

See some of the weird shit they are coming out with. Some of them are saying they celebrated the 4th goal as it means its more likely Lennon goes. I'd never dream of celebrating a goal against us.


For reference we've conceded 8 goals in 22 games before tonight.

Bornabear said:
See some of the weird shit they are coming out with. Some of them are saying they celebrated the 4th goal as it means its more likely Lennon goes. I'd never dream of celebrating a goal against us.
Click to expand...

Yeah, but we are human beings.
C

I thought Jullien was meant to be the saviour in the defence?

Was that prick hartson actually crying?

I appreciate we're all very, very pissed off just now. But it'd be nice if we could keep it reasonably civil. By all means have a rant and a vent. But I think we're crossing the line when NL is being called a rat, etc. Whatever he is, he's someone who loves the club. And if you see a post that you think is offensive, report it rather than responding with all guns blazing. If enough dislike a post it'll disappear on its own. Ta.