Do any of the older supporters remember this book? My Dad had a copy which I discovered and devoured when I was a kid (in the 80s). From what I remember different chapters told stories of either great players in our history or our very first few years / campaigns in Europe, or great teams from the past. I feel like it was probably something my dad got when he was a kid in the 60's, it was the first thing I ever remember reading about our history. Im guessing it came out about 60s cos I dont remember anything in it from pre that era although I was probably about 10 when I read it. I remember stories about guys like Don Kitchenbrand and our first european games v Nice etc. I've had a look online in the past and not been able to track it down but I'd love to get a copy and read it again as an adult. Not even 100% sure Ive got the title right but if that rings a bell with anyone Id'love to hear more about it. 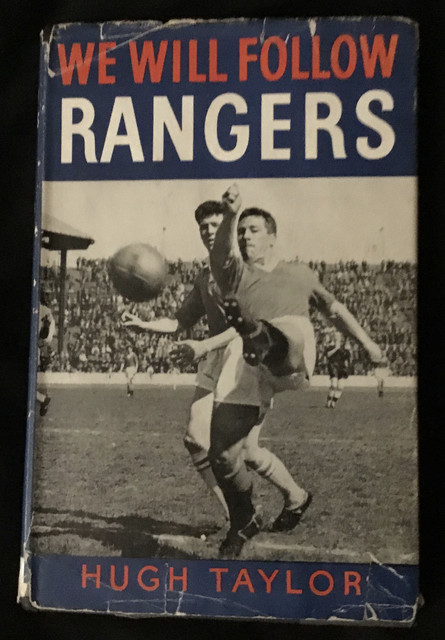 Buy We Will Follow Rangers By Hugh Taylor. Available in used condition with free delivery in the UK. ISBN:

Good book, from what I remember a lot less dry than the previous historical books by W.A.

Buy We Will Follow Rangers By Hugh Taylor. Available in used condition with free delivery in the UK. ISBN:

Good book, from what I remember a lot less dry than the previous historical books by W.A.
Click to expand...

Thats definitely the one I remember the authors name, thanks very much! Dont think the copy I read still had the jacket I remember it looked like a bible or something! Ill order that just now, much appreciated!

Texas ranger said:
This one ?

Still got my copy without cover,but fuming l lent my copy of Wee wuillie Henderson 's book out never got it back"Playing for Rangers "if I remember correctly!

Hugh Taylor was a Killie fan.

carlosapicella said:
Still got my copy without cover,but fuming l lent my copy of Wee wuillie Henderson 's book out never got it back"Playing for Rangers "if I remember correctly!
Click to expand...

I’ve got this in the loft somewhere. It’s the one that starts with the Wolves away game, isn’t it? Sure that’s where I got the info that the plane that took us to Nice for our first European Cup away game was the same plane that crashed in Munich with Man Utd on board.

"The Scots arrived in Wolverhampton with the clamour and ungency of an invading army. They wore no arms or armour, but their blood was set on fire with the excitemet of combat to come; there was a hint of the pomp of war about the banners they carried, their fierce battle hymns and their touchy, defiant chant: 'We Are The People'.
To English eyes they must haver been bizarre and alarming - as were the bearded, tattered clansmen who followed Bonnie Prince Charlie south of the border in 1745.

But it was perhaps as well that no one in Wolverhampton made that comparison, for the Scots who had taken over their town that April of 1961 would have given the romantic prince short shrift - would, indeed, have been his most bitter enemies - for their proudest boast is that they are the Loyalists of Loyalists, the Protestants of Protestants.

Their banners had no foreign flavour. They were Union Jacks and Scottish Standards.

The Scots were supporters of The Glasgow Rangers Football Club.

Ten thousand of them had travelled to England to see their club play Wolverhampton Wanderers in the semi-final of the European National Cup Winners trophy.

And Wolverhampton, a teeming industrial town of 160,000 inhabitants who thought they knew something about football partisanship, gasped; for they had never seen such fanatical supporters.

All day the Scots paraded the streets, singing, shouting and waving their banners. 'They were the noisiest supporters we have ever known' said a police official afterwards.

The English, who had thought that Scots were dour, phlegmatic, often mournful, lacking humour, looked on amazed.

Welsh choirs had no more fervour than the Scots from the Glasgow streets, the Highland moors, the Lowland Housing schemes as the chanted: 'There's not a team like the Glasgow Rangers.'

And the English wondered what it was all about when, now and again, a derisive chorus filled the air: 'Haffey, Haffey, Haffey.' That was the Rangers supporters' way of poking fun at their great rivals, Celtic, for goalkeeper Frank Haffey, of that club, was the man who had lost nine goals at Wembley when England humiliated Scotland the previous Saturday.

Excitement mounted among the Scots when the game started at Molineux Park. Rangers blazed their way into the final by drawing 1-1 with Wolves, whom they had already beaten in the first leg at Ibrox 2-0. And at the end hundreds of Scots swarmed over the barriers on to the pitch to cheer and hug their idols.

Just who are The Glasgow Rangers? What have they got to arouse such feelings among their fans? Imagine 10,000 supporters travelling all this distance for a club game?

'Rangers are the greatest team in the world.'

Forward with Rangers thanks for that mate,!

Hugh Taylor was the main sports writer for The Record for years alongside Alex Cameron.

Bought a copy of the book from ebay a few years ago.

It's one of the best of the old Rangers books with some great tales, such as the games with Wolves, the early European Cup adventures and some tight league campaigns in the 50s.

I'd also recommend 'The Rangers : Scotland's Greatest Football Club' by John Fairgrieve, published 1964. He was later a big critic of the club in The Sunday Mail but it's a great read.
I

dh1963 said:
Hugh Taylor was the main sports writer for The Record for years alongside Alex Cameron.
Click to expand...

Hugh used to do the old annual "Scottish Book of Football", it was an essential book growing up in the 60's and 70's.
Always seemed to have a photo of a Scotland/England match on the front and showed the absolutely massive crowds packed into Hampden.

Iron_Curtain said:
Hugh used to do the old annual "Scottish Book of Football", it was an essential book growing up in the 60's and 70's.
Always seemed to have a photo of a Scotland/England match on the front and showed the absolutely massive crowds packed into Hampden.
Click to expand...

That book plus 'Playing For Rangers' by Ken Gallacher were essentials for me every Christmas, and I still have every one!
M