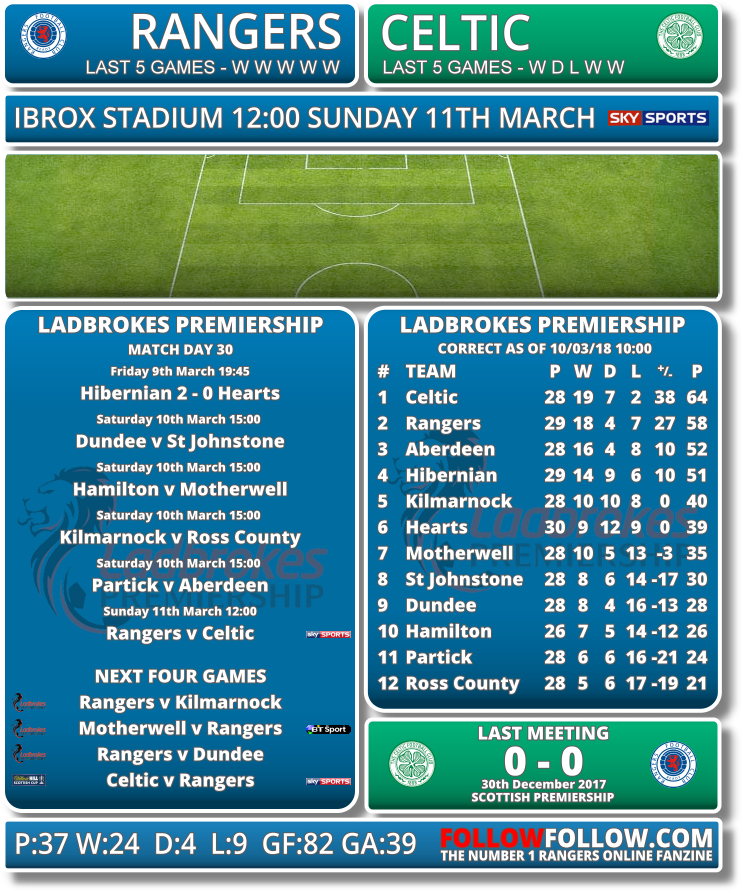 Looking forward to the game tomorrow. This is the most important game so far. We win,and the race is on. Not only that, but,a boost for the semi final as well.
I think we will win this 2-1.

Good to see the WWWWW as our last 5 results.

Starting to get the nerves, fu.ck knows what I'll be like tomorrow
Just beat those baztards tomorrow Rangers.

Let's get tore into these bastards.
Rangers for the win.
Battle fever on!

I believe we'll beat them because we've a better squad than before who are playing well. and that the moonhowlers have passed their peak. But even if you look at it another way, the law of averages dictates that we're due to beat them, regardless of form.
Kick off can't come soon enough.

Official Ticketer
2-0 to the Queen’s Eleven, Alfredo and Josh to score and Fod to have a couple of his usual top OF saves.

Tear into them from the start...when we don't have the ball, run them down to get it back,give them no time on the ball.

I'm really looking forward to it .just win Rangers any win and let's see the meltdown

I dread these games, always fear the worst, struggle to sleep beforehand and can't wait for it to be over.
It's great!

Nothing matters except the result. A win, no matter how, is the only thing that counts.

Quite calm at the moment, looking forward to the game tomorrow, probably nerves will start as I head for the supporters bus in the morning. It's a good feeling going into this game tomorrow not dreading a humpimg.

That's all I want, don't care how, by how many goals or how well we play; I just want to beat these filthy creatures and shut the Scottish media up.
T

Its my first game back since my mum passed away .know my mum will be cheering us on so i hope for a win.

Get to them from the kick off,close down their bombscares in the their defence THEY will make mistakes....2-1 for me

Come on you son's of William!

That's what I normally shout before ko.

Tomorrow I will add a few choice words.

Let’s do it Rangers

Official Ticketer
Rangers win, not sure how many by but well win

Close them down fast and keep the ball on the deck , fast movement and shoot when chance comes - do that and we'll win !

Play as we know we can we'll win. 3-1 the Sons of William. C'MON THE Rangers!

What will be the player’s routine today? Light training this morning? Teem meeting/squad announced? What time would they go to the team hotel?

I’d be crawling up the walls if I were one of them right now. God knows what Murphy and Docherty must be feeling right now, getting ready to make their Old Firm debuts.

Got kids so sans beer.

Don't let the bstards breathe, get right on top of them and then play our way to victory

New Jersey Bear said:
Told by a friend, who was told by another friend, who in turn was told by a guy who gets the scum team wrong 1 in 50 allegedly, that it’s De vries, boyata, ajaer, simunovic, Forrest, tierney, Brown, ntcham, McGregor, Eduord, dembele. Whether it’s true, I have no idea, but would suggest 3-5-2.
Click to expand...

Hope so because we could destroy them down the flanks.

Just do it Rangers . Do it in style !

Wilkinsvolley said:
This but 3-2 because it’ll win me just under £2.5k
Click to expand...

Hope you get it mate.

We'll need to match them kick for kick as we already know we can outplay them. The concern is how will the biased ref enterpret our physicality?
I'm hoping for a balanced approach for a change as the league needs to generate some excitement for the first time in what, 6 years and an emerging Rangers team begin to fulfil their potential under pressure, in the most important of games.
R

William Munny said:
We'll need to match them kick for kick as we already know we can outplay them. The concern is how will the biased ref enterpret our physicality?
I'm hoping for a balanced approach for a change as the league needs to generate some excitement for the first time in what, 6 years and an emerging Rangers team begin to fulfil their potential under pressure, in the most important of games.
Click to expand...

Agreed, and glad it isn't Beaton. I feel we will be too much for them, and will match them physically. They will target the petulant side of Morelos, so he needs to ignore the bait. We have several potential goal scorers now, with Goss/free kicks another weapon. We will score at least one more than them. Rangers to win.
You must log in or register to reply here.
Share:
Facebook Twitter Reddit Pinterest Tumblr WhatsApp Email Link