"Some footballers play as if they have the benefit of observing from a panoramic view. Steven Davis is one of them.

While others can lose their sense of perspective in the heat of battle, especially in a crowded midfield where every touch results in a player breathing down your neck, his composed persona often gives the impression the opposition are on a delayed feed.

That would explain why, at 35 years old, he is usually first to everything.

Dundee United tried to press Rangers at times on Saturday — the first team to do so this season — but it didn’t work as Steven Gerrard’s side gradually tore them apart. It finished 4-0 but really should have been more.

The attacking plaudits are going to Ryan Kent for his new-found ruthless streak in the final third and seven consecutive clean sheets are bringing praise for the defence, but the Northern Ireland captain has proved to be an understated influence since coming back into the starting line-up over the last three games.

Davis on Northern Ireland duty against Norway this month (Photo: David Fitzgerald/Sportsfile via Getty Images)
“A special footballer,” said Gerrard, praising Davis, who this week equalled Pat Jennings’ international record of 119 caps. “If anyone would have had an excuse today to be a little bit off it or a little bit flat, it would have been Davis: two international games away from home at his age. But he doesn’t use excuses. He just goes out and does the job, exactly what you ask him to do. He’s a top-class individual.”

Davis took a while to rediscover his match fitness when he returned to Rangers on loan in January 2019 after a significant period of inactivity at Southampton. Some had written him off then but last season, he and Ryan Jack struck up a terrific partnership in midfield. They were controlling games with ease but then, after the winter break, Davis looked significantly off the pace. He was uncharacteristically being caught on the ball and allowing counter-attacks to happen through the centre of the park.

The three-month break allowed him to return to his home in Hampshire, where he performed the extensive fitness plan put in place by head of performance Jordan Milsom. He also worked with a personal trainer, Jason Moore, who did regular sessions in his garden.

Davis looks refreshed and back to his usual self. On Saturday, despite being a players’ player whose understated style is based on precision and control, he was still outstanding.

There were times in the first half when Dundee United threatened to break away but Davis always seemed to be the player who would pick up the scraps. At times, he nipped in to steal it away just in time.

He made 66 completed passes — lower than his usual total — and either won back possession or gathered possession 14 times during the game as he proved that he is both playmaker and pickpocket.

Six minutes: Borna Barisic plays into the feet of Brandon Barker but Lewis Neilson intercepts. The ball breaks quickly to Davis in the middle of the park and, instantly, you see the picture he is painting in his head. He spots that Ryan Kent (No 14) has continued his run down the line and so he changes his stride pattern to enable him to play a delicate first-time pass with the outside of his boot.

18 minutes: Mark Reynolds attempts to clear the ball but scuffs it infield (first picture). It comes to Davis at speed but, rather than get it under control and reset possession, he plays a block pass (second picture) using the pace already on the ball to redirect it through a narrow gap to Kent, who can run at the defence (third picture).

32 minutes: Davis plays the ball wide to Barisic, whose cross is cleared by Jamie Robson. Davis is jogging out on the left wing next to Ian Harkes but, despite starting two yards behind him, he anticipates where the ball is being cleared to and has already accelerated. He lays the ball to James Tavernier and Rangers almost score with the second wave of pressure.

38 minutes: United clear another cross and it trickles into 40 yards of space. It is one of those strange moments that highlight just how dominant Rangers are and how it has been too easy for Davis, who had just been out on the left flank before jogging across the entire width of the park to retrieve the ball.

46 minutes: The ball comes into Peter Pawlett’s feet but he suffers the same fate Nicky Clark discovered several times: if you play a blind pass, Davis is likely to read it.

64 minutes: Davis plays a one-two with Scott Arfield and disguises a cut-back to Kent, who mishits his shot wide.

69 minutes: Right wing-back Luke Bolton receives the ball on the touchline. Davis knows what pass he is making — the one down the line to Logan Chalmers — but lulls him into a false sense of security and steps in to claim the ball just before it is played.

75 minutes: Davis weighs up when to hold his position and when to press. With 15 minutes to go, Rangers were still pushing for more goals. This was epitomised by how Davis hunted down Reynolds. Kemar Roofe supported, which caused Ryan Edwards to panic and Davis created an opening that Ianis Hagi didn’t take.

Davis doesn’t shout often but when you hear the Ulster accent, you know he’s in space. He doesn’t do anything for show and that is true of his overall game, which sees him back dictating games like clockwork."

He’s the best midfielder in the country by a distance I still can’t believe people were shouting about his legs have gone and he’s past it nonsense. 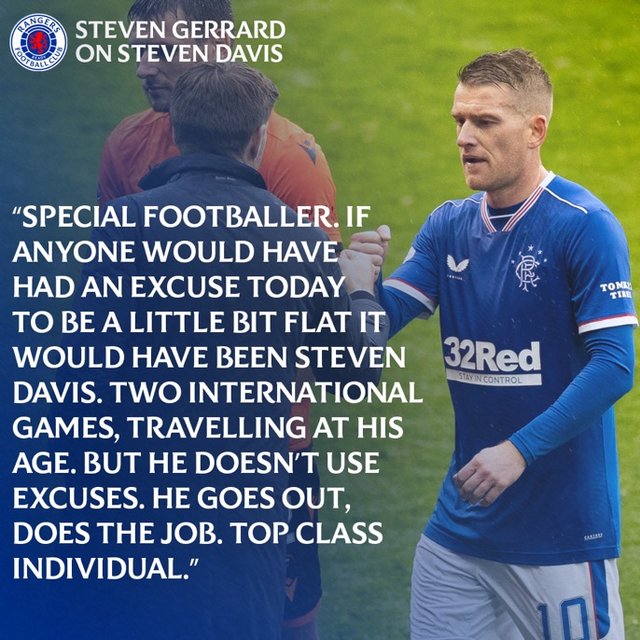 Good article to read for those who questioned why we gave him another year.

Even after the game I saw a comment on social media. Some clown saying he wanted Davis dropped because midfield is a young man’s territory.

Regular football is the key for Steven Davis.

The winter break definitely had an adverse affect on him last season.

Davis is a quality player but he won't do 60 games a season, he has to be used wisely.

Great player, when he plays, we play.

Davis is our best midfielder after Jack.

rangersno.1 said:
He’s the best midfielder in the country by a distance I still can’t believe people were shouting about his legs have gone and he’s past it nonsense.
Click to expand...

Exactly! When he is played where he excels,everything flows through him. Years left in the (supposedly)old legs.

I had real concern after the game at home against Leverkusen, never seen him lose the ball so much, he got the point where he looked like he didn't want anywhere near it, and what was more concerning Gerard took off Kamara..

But, he's come back looking great.. keep it up!

'A playmaker and a pickpocket' is a great description of Davis.

"Some footballers play as if they have the benefit of observing from a panoramic view. Steven Davis is one of them."

This fits Davis so well as, when he's at his best as he was on Saturday, you think there are two of him on the park. This isn't because he's a hustle and bustle midfielder but because he knows how to be in the right place at the right time.
B

Punt13 said:
Regular football is the key for Steven Davis.

The winter break definitely had an adverse affect on him last season.
Click to expand...

Often, with older players, games are more important than training.

A break like that probably has more affect on an older player.
M

I am amazed at the number of times he nicks the ball from the toes of opposition players,he has a great football brain and still has fast feet.I think he will be key to our success this season.

Leopold said:
Even after the game I saw a comment on social media. Some clown saying he wanted Davis dropped because midfield is a young man’s territory.
Click to expand...

Steven Davis is head and shoulders above Ryan Jack.

It’s been playing next to Davis that’s brought Jacks game on IMO.

Big fan of RJ but he’s miles off Davis in terms of ability at this stage of his career.