Shit!, I forgot to not use capitals!, tried to change it but I can't, sorry admin can you please change?, don't want another ban!

Excellent work there. Share this far and wide. Get it all over social media.

Like the previous events, this will be covered up

This should be sent to people out with the scummy compliant media in this country.

Ponientebear said:
This should be sent to people out with the scummy compliant media in this country.
Click to expand...

Spread it out there then far and wide!

A cancer on society, with the power to resist and deflect investigation over decades.

Thanks for posting. I've copied the link in a post on the 'Torbett' thread.

Be a lot more appealing and have more credence if the swear words were taken out, I don't mind but if you want a wider audience that part needs cleaning up, why isn't there a massive outcry like Penn State in America ?

I love Fish Sticks in my mouth

Shocking coincidences, but could have been put together a bit more professionally.
B

Cunts are lording it just now. Soon to be over.

Hank said:
Shocking coincidences, but could have been put together a bit more professionally.
Click to expand...

The guy has done great research someone should help him makjng it more proffessional.

It's been widely reported down south Saville had links in Scotland, but the media up here don't want to touch it.

Scotland is overrun with these beasts.

Peados in position of power and influence is something I've been talking about for years.
It 100% goes on.
What makes anyone think it's limited to Asian gangs in Yorkshire? They are just the ones that get caught.
Very few of the high profile people ever meet justice or when they are exposed it's after they're dead and their victims get no justice.

Official Ticketer
Tidy it up and circulate. 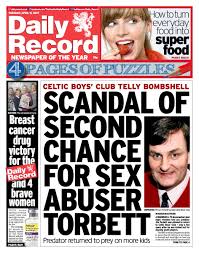 I'm glad we are highlighting this now. Maybe the prominence given (top of the news) to an anonymous accusation against us (to which we have responded with legal perfection and sensitivity) will open the door to the systematic and endemic abuse they have sought to cover up, and never been properly punished for.

George Goudie said:
Tidy it up and circulate.

The victims have to have their revenge.
Click to expand...

The victims have to have their revenge? Yeah by cutting his f.u.c.k.i.n.g H.e.a.d off fast!

The Roman Catholic Church is the biggest criminal gang in the world, poison from top to bottom.

So how do I find out if there’s a court interdict on this and if there is what is the reasons for it and the scope of that injunction?

Where does one even start to look?

The interdict itself should be published online for all to see the extent of their attempts to cover up abuse.
Last edited: May 17, 2018

But none if them will.

SFA compliance officer should be asked to investigate whether the SFA was properly investigated after one of their linesmen was caught being a paedo.

Safe Standing Bear said:
The guy has done great research someone should help him makjng it more proffessional.
Click to expand...

Keep up the good work.

What happened to the Cairney trial ?

Join the dots on these blogs and its clear the vested interests are involved in a massive cover up.
SNP,Celtic FC and the Catholic church are clearly in cahoots and have been for decades.
The SFA enguiry will be another whitewash.

Great this get it posted everywhere.

Official Ticketer
Hundreds of bodies dug up in a mass grave at RC 'corrective school'....

Eddie Doc said:
It's a woman.
Click to expand...

In my opinion Women are the people who will unite and bridge religious divisions to get this horror story out in the open ,the filthy perpetrators are ALL male.

When the inevitable phrase of being separate from the club springs up, keep this to hand and share far and wide.I have copied this from the imperial bears site, any additions to prove the undeniable link should be added and shared.

1. Jim Torbett, one of the 6 known paedophiles or sex offenders to have operated from the club, approached legendary Celtic manager and infamous paedophile harbourer, Jock Stein, for permission to set up a ‘nursery’ using the clubs name.

2. During Torbett’s first trial the court was told how Jock Stein kicked Torbett out of the club. In fact Celtic fans proudly tell you this, thinking it meant he didn’t need to notify the police! How could Stein kick Torbett out of a completely separate entity?

3. Jock Stein also brought Frank Cairney to the club to get rid of the smears and innuendo surrounding it while Torbett was there. Not only did Stein let a paedophile roam undetected for decades by failing to notify the authorities, but he also managed to replace him with another! A club like no other indeed! But again, can the PR guy with the big brush tell us how Stein was able to make these decisions on behalf of a totally separate entity?

4. When a boy was allegedly abused by ‘Big Frank’ on a trip to the US his family confronted Liam Brady & club scout John Kelman about the ordeal. Brady insisted that Cairney was removed from his position. Again, how can Brady insist on the removal of a member of a completely separate entity?

5. The family of the same victim were made to sign a statement saying they would not notify the police. The agreement was made with Liam Brady (then manager of Celtic Football Club), Celtic FC lawyers, and the current Celtic board which included Kevin Kelly and Jack McGinn. AGAIN, how could this agreement be made on behalf of a totally separate entity?

6. When Hugh Birt, former Celtic Boys Club Chairman, notified the Celtic board of his concerns over Torbett & Cairney, he was forced to resign, and lost his seat in the directors box at Celtic Park. Getting boring now, but how can he be forced to resign from an organisation completely separate from Celtic Football Club?

7. When Birt told the board his concerns, they were referred to club manager Davie Hay. Why was the club manager involved in an incident concerning a separate entity?

8. Celtic Boys Club used Celtics training ground, Barrowfield, for matches and training. Did they pay rent? Is it normal for Celtic to allow completely separate entities to use their facilities on a regular basis?

9. When ‘Big Frank’ was arrested, the then Celtic manager and lifelong friend of the alleged paedophile rushed to his defence saying ‘He has the whole of my backing, and that of Celtic Football Club to a man’. Why would the manager of Celtic Football Club offer the club’s support to a man accused of child abuse involving a separate entity? Did they come out and offer support of the paedophile linked to Penn State? Or the BBC?

12. Torbett was a regular in the director box at Celtic Park, and fellow paedophile Frank Cairney was also a regular, as well as ‘having the ear’ of the club management.

13. Fergus McCann instructed Celtic lawyers to take a statement from John McCluskey, one of Torbett’s victims. Why would club lawyers be involved in an incident affecting a separate entity?

14. Celtic FC made payments of £1m to Trophy Centre while its owner was in prison...he was in charge of a separate entity. Why the payments?
Last edited: May 17, 2018

There is so much damning evidence against them and their fucking church. I recently watched a couple of documentaries on the irish caffliks back in Boston. They fought the proddy politicians until they almost totally ran Boston politics. Boston is now the number 1 paedo infested city on the planet with 95% of them irish cafflik.

Will no conservative MP or MSP push this.

It's clear labour, SNP, Celtic and the Catholic church have no desire to clean out their own closet.

This is a good piece of research pulling all this together. I pray that somehow these deviant scum of society are all one day brought to justice. Cannot even start to think, what these kids and their families must have gone through. I know if it had ever happened to my kids, I would probably be serving a life-sentence. All this information available, yet Mark Daly chooses to create a piece regarding us. Sadly we know what Daly and the BBC's priorities are and of course they have a history of harbouring deviants.

If I may and please do not be offended, as a draft to this audience it is fine as someone has already suggested, but this needs told far and wide and for that, you may wish to tidy up the English and do away with the expletives and provide proper respect to the Royal Family. I can have a foul mouth myself at times, but as someone once told me quite correctly, swearing is just an admission of a poor vocabulary. Remember, We are the people and at all times we must be seen to represent that.

Keep up the good work though.

Official Ticketer
The media are under smelly spell.

Snap out it, join the dots, dig deeper you cowardly bastards.

By doing very little you are complicit in a huge sporting and moral scandal.

There must be a journalist in England interested in this. Who broke the scandal down south ?

I work beside a guy who's brother was on celtics books in the sixties and he was sexually abused by a coach there. Messed him up so much he emigrated to the US to escape the whole thing.

It’s not a one off isolated case

How these so called professional journalists can sleep is beyond me

Celtic FC made payments of £1m to Trophy Centre while its owner was in prison...he was in charge of a separate entity. Why the payments?

seems very quiet on this from the VBears, they are normally on top of this stuff.

Have they been warned off?
G

Official Ticketer
There must be someone in the Scottish media who will break ranks and run with all this.

we are waiting on a Tiger Woods moment

every cant knows all stories are ready

Just waiting on a drunk reversing a car in to a wall.....

And all shall come out.
S

Can someone google kilsyth saville, and upload the photo of saville , kevin kelly and the priests.
I live in kilsyth, he stayed with the priest regulary in the 70s/80s.
There must be plenty tims in there 50 s with stories to tell.
Add in cardinal o brien who was there later

I find extraordinary that they have that many friends in positions of influence they have and still can keep this scandal from blowing up.

Paisleyprod said:
The media are under smelly spell.

Snap out it, join the dots, dig deeper you cowardly bastards.

By doing very little you are complicit in a huge sporting and moral scandal.
Click to expand...

Two cheeks of the same arse. No pun intended.