The story of the first time Rangers won the Scottish Cup

It's Scottish Cup time, as we resume after the break with Stranraer at Ibrox. We haven't won it since 2009, which is a very long time for our club. But we had to wait even longer to win it for the very first time. Here is the story.

Season 1893/94 would be the 20th season that Rangers would compete in the Scottish Cup. Although the SFA had legalised professionalism at the start of that campaign, it would be some time before the league championship would take precedence in the priorities of clubs and supporters all over the country. The Scottish Cup was the trophy everyone wanted most, and after 19 unsuccessful seasons, and no appearances in the final since 1879, Rangers were consumed by a desire to put their name on it.
They certainly started the competition like a team on a mission, sweeping into the semi-finals beating Cowlairs, Leith Athletic and Clyde scoring 15 goals without reply. They were then drawn against cup holders Queens Park. The famous amateur club still frowned upon the Scottish League, which they refused to join for a further six years, but they were strongly favoured to defeat Rangers and go on to challenge for an 11th Scottish Cup success.

15,000 fans crammed into the old Ibrox for the match, and watched Rangers snatch a 1-1 draw thanks to a goal from David Boyd. With home advantage now lost, Rangers were viewed by most as having lost the slight chance they had to reach the final. But at Hampden in the replay in front of 16,000, Rangers dominated their more illustrious rivals and goals by Nicol Smith, John McPherson and James Steel earned a fantastic 3-1 win and a date in the final 7 days later against Celtic. The Parkhead side were league champions and league leaders, and were seen as favourites, but many were starting to believe this could finally be Rangers' year. They also had the memory of a resounding 5-0 league win over Celtic earlier in the season to give them even more confidence, so it was a determined and optimistic Rangers who lined up in Scottish football's showpiece occasion.

On 17th February 1894 at Hampden Park, a crowd of 17,000 gathered to see if that optimism would be justified. The first half was goalless, Rangers coming close in the opening minutes when McCreadie shot narrowly past when well positioned, but Celtic came even closer just minutes before the interval when Blessington struck the crossbar with Rangers goalkeeper Haddow well beaten. The second half was the prove to be the finest 45 minutes of the club's history until that point.

In a remarkable and devastating 13 minute period, Rangers overpowered their opponents with a superb display of ruthless attacking football, and in those 13 minutes the destination of the cup was decided. It started in 55 minutes when Hugh McCreadie controlled a David Mitchell free kick 12 yards from goal and lashed the ball beyond Celtic keeper Cullen and into the net. On 65 minutes it was 2-0, and it was a goal fit to win any trophy. James Barker receiving the ball 50 yards from the Celtic goal, then weaving his way past several despairing challenges before crashing home his shot from just inside the penalty area for an unforgettable solo goal. If there remained any doubt about the outcome, that lasted only 3 more minutes when the great John McPherson pounced on a defensive error to beat Cullen from close range.

Celtic were a beaten team but refused to throw in the towel, and were rewarded with a consolation goal after 75 minutes when Willie Maley converted a McMahon corner from 3 yards out, the only moment of slack defending in the entire second half. The final whistle sparked joyous scenes both amongst the Rangers players and their supporters, and the roar could be heard back at Ibrox when captain David Mitchell lifted the Scottish Cup for the club's first ever triumph in the national competition. William Wilton's men had carved a place in Ibrox history, and to this day their achievement should never be forgotten.

Great stuff from the op. I love stuff like this.

As always, a great read dh1963. Setting aside recent “exceptional” events, the Scottish Cup has been a competition which we have not won for a number of years on a few occasions and then we go on a run where we seem to win it more often than not. We all must hope blue skys and sunshine are just around the corner.

Love reading stuff like that, thanks for posting OP

Always look forward to your archive reports.
Click to expand...

I disagree with everything the other lot say and do apart from 1 thing. We should know our history. The big difference is we are proud of ours.

Thanks for posting. I love reading about the history of Rangers.

I want us to win the League this season and the Scottish Cup and the roar from Hampden heard back at Ibrox!

Love reading the history of our great club, thanks for your post.

No film footage, bugger!
I love reading these, you wish you'd been there

Good stuff, thanks for posting. 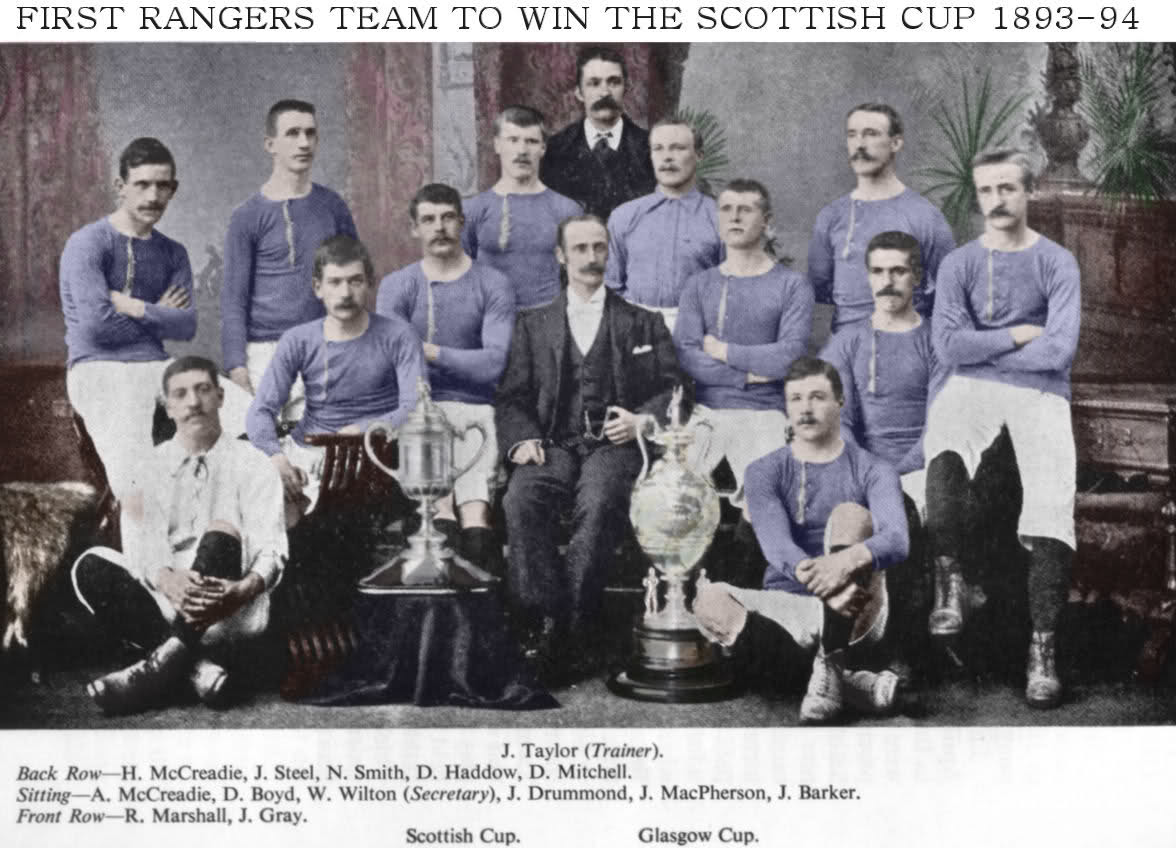 johnkp said:
And a good looking bunch, too ...

No red tops to the socks, there would be an outcry these days

I presume Boyd was 12th man in the days without subs, there are 12 of them here. Sounds familiar, Boyd dropped for the big games!

Thanks for this DH, a great read as always. The history of our great Club is second to none & is well deserving of a suitable museum which, if done correctly would be a resounding success imo. This is a venture that the Club should be targeting as we make our way back to the top & approach our 150th year.
You must log in or register to reply here.
Share:
Facebook Twitter Reddit Pinterest Tumblr WhatsApp Email Link