What are the mitigating circumstances Lennon spoke of but cannot disclose?

Outside of Lennon’s warped mind and back in reality - there are none.

No Money No Problems

Don't you just hate it when people your friends with let you down, wish I could say more but I can't.

I thought about it and probably bullshit but maybe an undisclosed illness of someone in the club, will come out in the end no doubt if true.

He wanted Messi but peter never put the bid in and then Duffy turned up?

Someone called him a name.

Southside_shug said:
Yeah it is a genuine question.

if SG had said something like that he would have been harangued for an explanation
Click to expand...

Correct.
In fact it would have been front page news, Lennon obviously just wants to give the shark throwers something to drool over other than his own shortcomings.
Mr Gerrard , or any Rangers manager would have been hounded, insulted and ridiculed for a statement like that.
Glasgow is Scotland's biggest city, but not big enough to hide scandal or drama about football, somebody would know,if there was something truly newsworthy about mitigating circumstances, it would have leaked by now - the gutter tabloids would gave been desperate for a scoop to help their failing circulation and garner sympathy for their favourite team.

The great toothpaste shortage at Sharkhead.

Well basically hes looking to blame everyone but himself , his team have cracked under the pressure of a serious challenge ,they haven’t had it all their own way like they usually do and players dont want to be there because hes a piss poor manager

Don't you just hate it when people your friends with let you down, wish I could say more but I can't.
Click to expand...

Naw, tell us all ya cow

Delboy1962 said:
It really would've been great seeing that smarmy prick Lustig's face this season as the Tims hopes of the 10 disintegrated in front of him.
Click to expand...

If he was still here he would have either slapped in a transfer request or demanded a move in January due to ‘personal reasons’ like the coward that he is.
Y

Every Monday the squad turn up at Lennoxtown at 8am. 2 hrs later Lennon breezes in smelling of booze. The first team squad collectively think" that's us f####d for another week"
Gavin Strachan and John Kennedy appear from their new lounge after briefing Michael Stewart on sevco fouls.
Edouard asks what this week's tactics are. Lennon replies its a secret and he'll only tell people that know the city.
Meanwhile Dermot Desmond meets the army Council and is told Lennon must stay. Sadly TLB believes all this........ What do you think? How far is it from the truth?

Southside_shug said:
Yeah it is a genuine question.

if SG had said something like that he would have been harangued for an explanation
Click to expand...

Shug, the rodent is at it. It's just the usual yahoo tactic of deflect and deny. The only thing is, after last night, only the most mental of their mentalists are still buying into it.

As far as I'm aware the filth are the only team in Scotland who have allowed a player with Covid to play, thereby putting both team mates and their opponents at risk. - Penalty? A two game ban.

Compare and contrast with the 7 game bans meted out to our two players?

There are no words for Dubai. 'Ah but the Gov't okayed it' they cry. A convenient red herring. The landscape had changed from the Nov were given the go ahead to the Jan when they flew out.

We're still waiting on the enquiry to that one.

And he thinks they are treated differently? You bet they are. With a leniency no one else will ever get.

And yes, I thoroughly agree with your point about our manager uttering the same garbage. The press would be all over it.
L

I heard that some prankster smeared dog shite on all of the Lennoxtown door handles and the team have been licking them clean ever since instead of training.
Maybe nothing in it, who knows
R

I think it was when they all got gnoshed off by Laxalt after thinking it was just another Celtic braided hair groupy. After Neic did a full Begby and grabbed it by its meat and veg it was over for him.

bullen an la said:
the man who can't play 90 minutes and not one of the cowards in the scottish media scum will ask why.
Click to expand...

Is not that the ex Motherwell superstar?
K

cooprfc said:
CELTIC boss Neil Lennon has lifted the lid on a calamitous season in an explosive rant at SFA chiefs.

The Northern Irishman didn't hold back as he claimed that Hampden bosses had treated him and his club unfairly this season compared to other clubs.

Lennon said: "They bastards have actually made us play games this year instead of just having a zoom call and a vote. It's a joke."

We contacted Celtic for comment who said the matter has been referred to Officer Lustig for investigation.
Click to expand...

Unfortunately Officer Lustig has shit the bed and is unavailable for comment!

Lawrie from Denistoun jinxed him when he lauded him with his full title. Neil Francis Lennon from Lurgan in the county of Armagh.....in his best, I'm better than you voice.

All these "circumstances" are found only in the tramps own head.

Did Damien Duffy. Not leave under a bit of a mysterious cloud!
S

They are shite and being made play football games!

barrheadbear said:
I think signing a bunch of crap players, whether permanently or on loan, might have something to do with it.
Click to expand...

That’s not a secret

TLB makes a vague statement that alludes to conspiracy and the moon howlers will fill in the gaps. They'll convince themselves that they were once again cheated and not defeated.
The Parkhead club will never clarify his statement but in years to come a theory will become a legend,which they will trot out when Terry is spoken of

Thought we would be nailed to the floor forever.

I have been told Neic was fiddling with his tranny (keeping a tradition going since Rodger dodger introduced it) when he heard about project orifice the prep to go where no man been before.

As an E.L.E is coming and they are all doomed we won't have noticed as most of us will still be drunk after the big 55 party that lasts for weeks.

dcbear said:
Their manager is hopeless.
Click to expand...

His comment that his club have suffered the most by not having fans in is a huge slap in the face for his players. He has basically saying to them that "you cannot perform without fan motivation."

Rangers, on the other hand, don't need any other motivation.

I would hazard an educated guess that the club have been hinting at him to resign to bring in a replacement and they won't spend the money to get rid of him but want him out.

Southside_shug said:
Other than being shite, a shite bag and clueless?
Click to expand...

You’re giving is trolling post credibility.
He’s doing three things here.
One, he’s deliberately trying to wind up Rangers fans.
Two, he’s, so unusually, playing the victim card.
Three, he’s playing to the paranoid within his support who’ll be making up the facts in what he was meaning as we type.
W

Hes getting slaughtered by his own fans for they comments.

Maybe he knows cash is being held back in reserve for paedo compo !
That'll be his excuse.

laud55 said:
He phoned the special one and said hey Jose is there any line I can throw out there
Click to expand...

Did Griffiths snort it ?

Rangers are a better team.

Simple: Neil Lennon - like every other mhank - can't "disclose" that Rangers are actually a good team.

... Or maybe he's got some kompromat on Lawell, which has prevented him from being sacked. And a self-loathing Neil Lennon realises, but can't disclose, that his sh*te management has caused their terrible(y funny) season?
E

Neic is a vicTIM.

Nothing is ever his fault, is it?

He had a few wins and thought he could play the conspiracy card again and fans would start to fall in behind, he couldn’t do that Nov, Dec, Jan

He didn’t bank on a desperate result last night though

It’s all he’s got and when his own fans don’t buy it he’s done, a classless prick
W

More an opinion than fact from him, he thinks there are insinuating factors when there isn't. Certainly no footballing ones, Bolingoli was an employee that's on the club. Losing to Ferencvaros is on him, losing 4-1 to Prague's 3rd team of tradesmen is on him. He was given £15m+ on Ajeti, Barkas and Duffy alone so it can't be financial.
Not on the pitch and not financial off the pitch then he's talking out his arse 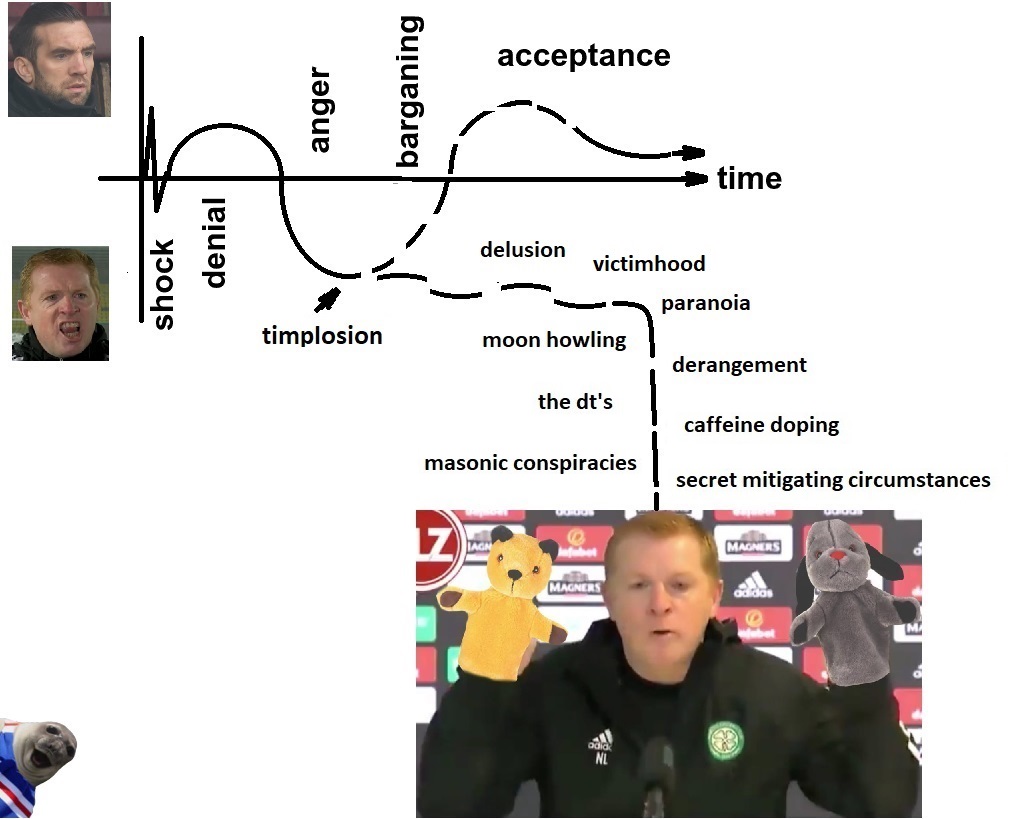 mdingwall said:
None. End of thread.
Click to expand...

This, most t4rriers don’t even believe him.