You agree with Zlatan?

By the looks of that he's well beyond 50.

Staff member
Years ago Ancellotti said you don’t win the Champions League with zlatan, he was right, Zlatan plays for himself he’s never been a team player.
B

To be fair the guy backs up his big talk. His goalscoring record is incredible.

He will be aiming to stop Juve no doubt. Close to signing new 2 year deal at Milan

This= egostisical wank but such a special player even at this time in his career.

I used to loathe him until he went through the “being a wank” ceiling into legendary funny character status.

He came over here and made a big deal about how he had always fancied a crack at the MLS and wanted to play for the Galaxy in particular. But he had obviously not done his research because the Galaxy were in a horrible state post Bruce Arena and were/are completely shite. He then spent eighteen months complaining about how shite everything about MLS is - players, referees, the play-off system - which was always in place - and travel arrangements (on this he was 100% correct btw) berating his own teammates in front of the fans, throwing his arms up in the air when he misscontrolled a pass and skulking off in the huff after defeats.

But he was f**king incredible while he was here. His legs were gone when he arrived but his skill, vision, agility, sheer physical power and burning desire drove him on to get it right up everyone around him by scoring a shitload of goals, quite a few of them utterly spectacular and will be included in video compilations long after we are all gone.

I've never seen a player of that age with such a chip on his shoulder and I think that is why he is still an elite athlete at the age of almost thirty-nine and three years after having suffered what should have been a career-ending injury at Man Utd.

By the time he left last year, the club, the league, his own teammates, the opponents whom he would grab by the neck and ragdoll just because he was bored and even a lot of his own fans (although they might have pause to reconsider now) were sick of his ego and tantrums and wanted him gone. I think he was great and I'm still gutted that he is away.

As an aside, my best mate over here is a proper Galaxy fan and happens to have a niece with downs syndrome. My mate took her to the training ground and said that Zlatan couldn't have been nicer to her, happily posed for pictures with the wee girl (I've seen the photos and he is beaming in them) and on that day, for a few minutes made her feel so important and special.
R

As much as he's a guy who does what he wants you have to look at the way he's changed the Milan team who have scored more goals in since the restart than the 6/7 months before it. Hes actually made them realise who they are as a club again and dragged them into Europe. Whilst they're not at the level they were and probably won't for a long time, he's made them far better not just on the park

Go on then big man, prove it.

Davie Meiklejohn said:
If he's planning to age like that by 50, he'll be lucky to tie his shoelaces
Click to expand...

I Am Zlatan is an essential read for any football fan and anyone that hasn’t read it can frankly gtf if they opt to abuse the man himself. We need more Zlatans in football. 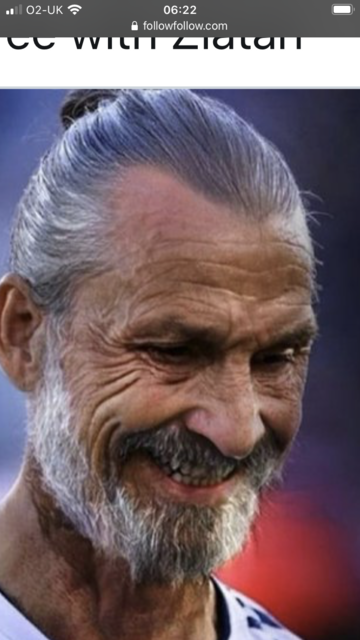 Would age for fun up here

Wang said:
Too many sunbeds??

That's not him now

Neilston Unionist said:
I Am Zlatan is an essential read for any football fan and anyone that hasn’t read it can frankly gtf if they opt to abuse the man himself. We need more Zlatans in football.
Click to expand...

Agreed, I wasn’t keen on him at all until I read it, changed my opinion somewhat.
T

His book is one of the best sporting biography I have ever read, I couldn't put it down think I read it over 2 days on holiday.

calderbear said:
He looks far older than me and I'm 57
Click to expand...

By the looks of that he's well beyond 50.
Click to expand...

Just in case use aren't aware.... That's not actually him. It's a Photoshop/ageing app thing

He’s been in unbelievable form for Milan.
C

Zlatan is a Ferrari

Davie Meiklejohn said:
If he's planning to age like that by 50, he'll be lucky to tie his shoelaces
Click to expand...

My kids had an app on their iPads that aged you to look 70.I looked younger than that cu*t does the now.Still some player.Score for fun up here.

His goal against Anderlecht for PSG is probably one of the finest strikes of a ball I've seen.

tottie beck said:
Disagree. He still had the genius but was blowing out his erse at the end of his time in MLS. Age catches up with us all, even the best of us
Click to expand...

He's still doing it no bother in Serie A for an average AC Milan team, he's got plenty of time left.

His goal for Ajax v NAC Breda was incredible, don’t know how to post a video but it was Maradona stuff. For Such a big guy his close control is incredible

Drumchapel Loyalist said:
He's still doing it no bother in Serie A for an average AC Milan team, he's got plenty of time left.
Click to expand...

As I said, he still has the genius, but his legs are giving out. Haven’t seen much of him in Milan, but in MLS others were doing his running for him,
K

Some player but he is a hairy arsed 38.

Modesty is one of his attributes.

It’s hilarious the amount of folk that get wound up by everything Zlatan says.

You would think they would have realised by now that it’s all said with his tongue lodged firmly in his cheek.

Love his chat. Not sure he takes himself that seriously, think it’s just patter. And he can back it up with his career record.

Played for Ajax, Inter, AC, Juve, Barca, Man U and PSG. MLS was the only diddy league or club since he left Malmo.

In the mls yes

By the looks of that he's well beyond 50.
Click to expand...

Deep fried hamburger said:
Just in case use aren't aware.... That's not actually him. It's a Photoshop/ageing app thing
Click to expand...