From Dortmund to Dundee 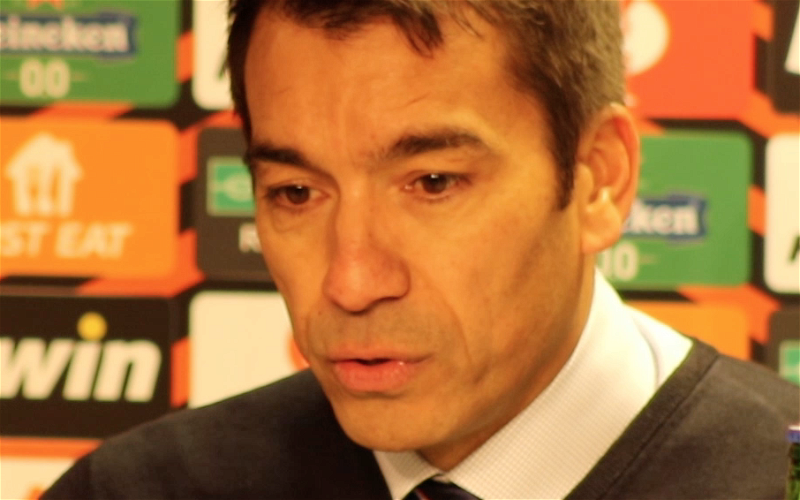 Many Rangers supporters will have awoken on Friday morning still in a state of disbelief. Did we actually beat Borussia Dortmund in their own back yard AND score four goals against them?

It was understandable then that when Gio van Bronckhorst arrived to speak to the media ahead of Sunday’s trip to Tannadice, the focus of the questioning wasn’t on the vital league game that lies ahead this weekend, but on the manager’s take on proceedings in Germany.

‘It’s great to come back from Germany with a win,’ said van Bronckhorst. ‘We are all very proud of the performance we had yesterday. But today is a new day and another game is waiting for us on Sunday which will need all the focus we have. The emotions are still really good, but we are fully focussed on preparing the team for Sunday.’

While we can debate where the result against Dortmund ranks in our 150-year history – surely in the top five when it comes to away from home in European competition – this was a landmark night for Gio and his team. The manager has had a hard time since the resumption of action after the winter break, and the knives were out only a few weeks ago. His tactical approach at Parkhead was questioned, but since then van Bronckhorst has shown his managerial mettle. He’s made some tough calls and has provoked a response from his players. And boy, have they have stepped up, culminating in a breath-taking display in Dortmund. You would have to argue that not many of the players involved put a foot wrong.

The bedrock of the XI was the two holding midfielders, Ryan Jack and John Lundstram. Jack turned in another superb display. He has been a key component of the team recently, and the manager is keen to keep him involved in the crucial games that lie ahead.

Gio commented: ‘Ryan has done really well in the games he has played, but he has also had issues with his injuries. I am happy to have him back in the squad, and if you see his performances in the last few weeks, he has been really good and strong. His partnership with John [Lundtsram] is also important for the balance in the team. As a manager it is important for me to keep the momentum, and to keep that you have to work hard. There is no time for slip-ups and we have to be focussed.’

Lundstram is also in a rich vein of form. He is a perfect fit for the number six role, and as he showed against Dortmund, he is also a goal threat from the edge of the box. He’s another that’s had new life breathed into him of late, and you would have to surmise that Ryan and John are now ahead of Glenn Kamara and Steven Davis for selection in that vital area of the team. Deservedly so too.

But for me, an unsung hero against Dortmund was Calvin Bassey. Although this was only his eleventh European appearance, the young lad played like a seasoned pro. It was as if he had graced this arena for years. But with Helander and Balogun ready to return at centre back, should Bassey be ahead of Barisic at left-back?

‘I’ll be honest, I just want to play every game,’ said Bassey. ‘As a centre back it’s about being brave and beating that first press. If me and Connor are brave, then that goes throughout the team. Left back is a bit more physically demanding, up and down, going to attack but also defending. But I just enjoy playing.’

He continued, ‘You’re always going to have moments in games when things aren’t going right for you. You’ll always make mistakes, but it’s about how you deal with them. You need to erase them and move on. If you make a mistake in the fifth minute, then you’ve still got 85 minutes to redeem yourself.’

Putting Bassey ahead of Barisic may be perceived as harsh on the Croatian. He has been excellent for Rangers, but there is no doubt his confidence has been shattered by his torturous experience in the East End of Glasgow. There can be no room for sentiment as we push on towards a league title, a Scottish Cup victory and now Europa League success. It’s Bassey ahead of Borna for me.

While we had a solid base at the back and in the holding midfield roles, we asked questions going forward too. For example, Ryan Kent was a constant threat to the Dortmund defence to such an extent that BT Sport’s Owen Hargreaves likened him to Franck Ribery. Gio had come up against Ribery during his playing career, so he was asked if the comparison was a fair one.

‘We know the qualities of Ryan, I can see the comparison,’ said the Rangers manager. ‘I think they both play the same way, they’re not very big, they move very lightly, and they can beat players in a one against one. I am really happy for Ryan with the performances he is putting in and the danger he has when we are attacking. But [against Dortmund] his defensive work was also impressive. He is becoming a better player with every game, so hopefully we can improve his performances and his development. But he is definitely one of the players who has stepped up his game in recent weeks.’

Gio concluded his part of the presser with a word on our wee loveable rogue, Alfredo Morelos. El Buffalo turned in another impressive performance, and he is another whose presence will be key in the closing months of the season. But his substitution last night had a few concerned that he had picked up an injury.

‘He was just exhausted after the performance he put in, not only with the ball but his defensive tasks and responsibilities he did really well [too]’ said van Bronckhorst. ‘I don’t think he will be a doubt for Sunday, I think he will be fit.’

That leaves us with a core of players that are likely to feature heavily between now and the conclusion of the campaign. Allan McGregor will be our number one, and the back four will certainly feature more often than not Tavernier and Goldson. The other two berths in the team are up for debate, Balogun or Helander at centre back, Bassey or Barisic at left back. Fil and the bustling Bassey are my choice.

In midfield, a fit Ryan Jack and a revitalised John Lundstram make the XI for me ahead of Kamara and Davis. And although he hasn’t hit his pre-AFCON heights, Joe Aribo gets the nod in the trio behind our main marksman, Alfredo Morelos. Ryan Kent takes one of the other jerseys which leaves us to debate whether a rejuvenated Scott Arfield or Aaron Ramsey fill the last role. As much as Scotty has been superb recently, I’m picking a fully-fit Ramsey in my team.

Gio has an embarrassment of riches to choose from, but in the cold light of day when the most magical of magic dust has settled, how significant will Dortmund’s second goal and the new ‘away goals’ ruling be? To sum up how bizarre the match in Dortmund was, there was probably a collective sag of the shoulders when Dortmund pulled a goal back with eight minutes to go. As phenomenal as the result was, Dortmund are more than capable of coming to Glasgow and scoring the goals they need to turn this tie on its head. And with ‘away’ goals not having the same significance they used to have, the tie is still balanced on a knife edge.

But for now, it’s not about the German invasion next week. The focus is Tannadice, a venue where we have lost already this season. Our domestic away form since the break has been abject. We must redress the balance on Sunday or else nights like Thursday will be filed under in the ‘nice to have’ category.

The battle for supremacy on three fronts continues.