From the Sofa: Hibernian v Rangers 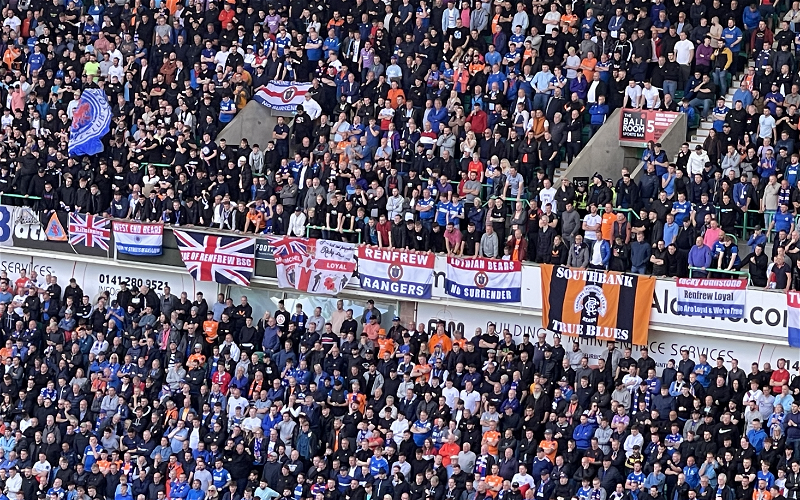 In the circus that is Scottish football, Willie Collum is the resident clown – with full suit, oversize shoes and collapsing car – who wants to be the ringmaster in every game. Pure and simple: he loves the limelight, but doesn’t have the talent or sense needed to be centre stage. His performance today in the second half was a master class of incompetence; his decisions determining the outcome of the game.

The chaos to come seemed unlikely in a dull first half where, yet again, Rangers were ponderous in their approach and tentative beyond necessity.  Gio’s pre-match warning of “difficult game, difficult ground” seems a cliched acceptance of caution in every game. You wonder whether a pre-match pep talk of “I think we’ll stuff them by 2 or 3 might be a more fervent call to arms, and instigate a faster, more positive approach. It’s Hibs we’re playing, not PSV away.

Lack of chances or shots on target presents the opportunity to talk about our crossing. Barisic, Tavernier, Matondo, Kent and Lawrence all played balls into the Hibs box finding green jerseys time after time. Our passing is often precise and direct; I have no idea why the management continues to accept that our cross balls aren’t aimed at, or certainly hitting, a blue jersey. When we do get it right…more later.

The continuing enigma that is Ryan Kent was another feature of the first half. Runs in the 7th, 12th and 35th minute all highlighted his movement, elusiveness and skill, but ultimately his wastefulness when the final killer strike is needed. Kent’s poor shooting, alongside our decision not to shoot when in perfectly good positions – Lawrence (surprisingly) and Lundstram being the main culprits – seemed certain to lead to a goalless first half.

The breakthrough did come just before half time and, for the Sky regulars amongst us, some beautiful nonsense from Andy Walker in his bewildering assessment of the penalty decision: “He’s definitely got his arms around him, but it’s really soft.” Thanks Andy, and while you were trying to work out what the hell you were talking about, Tav tucked the spot-kick away for a 1-0 half time lead.

I’ll be honest, I thought Aiden McGeady was a perfectly acceptable addition to the normal twosome of Boyd and McFadden for the Sky match analysis. “Definitely a penalty” and his assessment of Hibs’ penalty claim was fair.  Indeed it was McGeady pre-match who was arguing Morelos’s case for a bit of slack regarding fitness compared to Boyd’s “not fit, doesn’t play” approach. Nice to see a bit of debate and considered argument rather than cheerleading.

The build up to the Hibs equaliser in the 50th minute was a catalogue of misplaced passes, shirked tackles – Matondo seemed to pull out when the ball was there to be won – and poor positioning from Tav and the centre-backs. Not for the first time this season, the opposition didn’t actually have to do an awful lot to score: Youan cross; Boyle near-post finish: 1-1.

The benefit of good crossing was perfectly exemplified just eight minutes later when Barisic was set free down the left and crossed into a space where an attacker was always going to be favourite (and missing the first defender for once!) Lawrence’s arrival typified the positiveness and drive he has brought to the side; perhaps another argument for two midfielders pushing forward rather than the caution of two more defensively-minded players, in today’s case Lundstram and Jack. Borna, Tav and Ridvan need to watch that goal over and over: precise delivery leads to goals.

We could waste a lot of time on the Lundstram sending off on sixty-six minutes, but it would be pointless. Literally nobody in the ground, apart from Coco Collum, thought it was a red. If tripping an opponent to halt their progress is a sending off  then Doyle-Hayes would have walked early in the first half for his tackle on Lundstram. Even Andy Walker, no Sherlock Holmes in these matters, thought it was yellow.

The second red, Morelos on seventy-five, was a wee flashback to those times when Alfie simply couldn’t read the room. A couple of snarls at Collum and then a wee kick here and a flailing arm there and Morelos allows Collum to grab some more of the headlines. From Morelos’s actions nobody was going to be injured, but he is just tempting a referee with so much ‘previous’ and Willie jumped at the opportunity. Alfie’s red, justified or not, lost us the victory. Campbell’s equaliser on 93 minutes was a direct result of constant pressure and lots of shots due to the one guy who could hold the ball for us up front being in the shower.

The first points lost this season, but let’s keep the heid. The team must lose some of the caution that seems to be a trademark of the openings to every match. Hibs were there for the taking today and treating them like Champions League opponents is turning a team of jobbers into “difficult” (copywright GVB) opposition. As for the refereeing standards in Scotland? If I felt every game was a stitch-up, refereed to suit one team only, I would have stopped watching a long time ago. However, today’s performance from Mr Cairoli does require some serious, precise questions and an explanation regarding the actual laws.