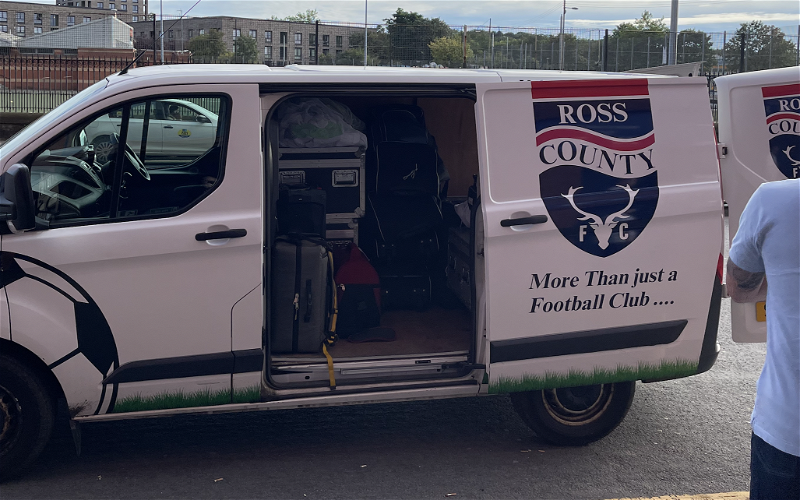 The first of these match reports where Rangers TV has been the provider allows me to chuck my tuppence worth in regarding the coverage. First thoughts always go back to my youth when, if you weren’t at the game (caller), you had to scan the Grandstand or radio updates to see how Rangers were doing.  Now we have every game covered in an increasingly slick, professional manner: great presenter in the assured Emma Dodds, someone who runs the ship without feeling the need to dominate; usually articulate guests and pretty much everything you could really hope for, bar being at the match itself. Quibbles (and downright rants) about Tom Miller’s style and the slightly lame banter with the co-commentators can often be fair, but here’s a guy genuinely excited to be at the game, keen to see the Rangers succeed and he can commentate. I often felt Clive Tyldesley’s commentaries, though professional, were a little manufactured in their support and interest in the Scottish game: employer/employee, rather than supporter/club, relationship.

Pleasingly, the Rangers team were out of the traps quickly for once, a real sense of positivity with all eleven heading forward at every opportunity right from kick-off. Interestingly, Connor Goldson seemed to have been given something of an ad-libbed free role: “if the opposition don’t intend to attack, get yourself up there”. This resulted in a tenth minute chance saved at point-blank range by Laidlaw and a decent penalty shout on thirteen minutes when Connor tried to beat his man on the edge of the six yard box. Perhaps this is a precursor of things to come against ten-men defences? It certainly added a bit of chaos and surprise in the opposition box, which is never a bad thing.

Before we get to the fun and goals, it does need to be said that Rangers should have been down to ten men on seventeen minutes.  After a soft yellow on eleven, James Sands certainly seemed to haul down County striker, Hiwula, for, at least, a second yellow.  Referee Don Robertson disagreed and, in my opinion, added to the notion that Scottish refs are diabolical.

On twenty-two minutes, Magic Tillman (it’ll catch on, wait and see) bailed out some shenanigans in the Rangers defence and with power and skill was midway into the County half. A Kent pass to Lundstram led to a shot from the edge of the D and the deflection from Purrington’s head (a wee Specsavers moment from Tom on commentary) ensured Rangers were deservedly in the lead. This shooting from outside the box could catch on.

Rangers’ second was part of the evidence to suggest that Scott Wright might well have an increasingly important role in the squad. He had the left side of the County defence in knots all day and an end product is gradually being added to his pace. A simple run past Purrington and, once again, if a cross finds a blue jersey good things happen. Antonio Colak finished superbly: one touch with direction and power. I think I saw several in the stands with their hands up, confessing that they were the ones calling him a dud after the big man’s pre-season (that’s pre-season) performances.

County should have been down to ten just before half-time when the already-booked Loturi stood on Kent’s foot.  The offence, for better or worse, is now a standard yellow in the modern game and Loturi should have walked. I think Mr Robertson was trying to work out if two wrongs, plus one right, plus another another wrong might somehow add up to an adequate refereeing performance. As I said, diabolical.

Tavernier could have made it three before the break when he headed Kent’s cross onto the bar; Kent’s input today seemed a bit more positive, direct and straightforward and the options of Kent, Matondo, Sakala and Wright give real optimism for the weeks ahead.

The second half didn’t require the pace and directness of the first, but it did highlight that in Tillman we have a player who can dominate the pace of a game. The sixty-two minutes he was on underlined that Magic (told you it would catch on!) is almost always going to be the quickest thinker on any SPL pitch and his quality is giving room for others to thrive. It just might be the case that we are seeing one of the best players to play in the SPL.

We had a drab period of play before a fantastic move in the fifty-eighth minute involving Kent, Lawrence and Colak led to the third goal and allowed the County masses to head back up the road. Once again, Antonio’s twelve yard finish required one touch: buried. A great week for the big man earned him a well deserved rest on seventy-three minutes, a like-for-like move with Steven Davis coming on – don’t you worry, Gio knows exactly what he’s doing.

It was more terrific, pacy work from Wright and Tavernier on eighty minutes that led to the final goal. A lot of Premiership defenders can handle crosses – particularly those hit straight at them – but far more of them lack pace…and that isn’t going to change anytime soon. Wright’s pass, Tav’s speed and cross, and Davis’s controlled, one-touch finish from just beyond the penalty spot was a fitting conclusion to a powerful, entertaining performance.

A great week for the club and one that sets up the season nicely and, in my opinion, slightly lessens the pressure on next week’s visit to Parkhead.  This squad seems to be coming together nicely; hopefully both manager and players have bought themselves some time with the fans, time that allows a full season of growth and development where fans can handle the inevitable ups and down ahead.