From The Sublime To The Ridiculous – Rangers v Motherwell 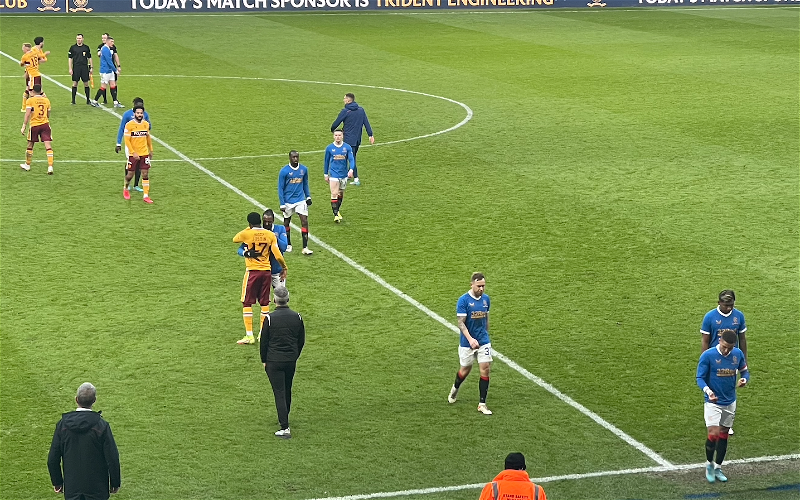 The Rangers supporters weren’t just walking down the Copland Road as they converged on Ibrox Stadium for yet another vital league match. They were still doing the ‘bouncy bouncy’ after Thursday’s mesmerising aggregate win over Dortmund, and there was also the extra spring provided by Celtic dropping points down the M8 against Hibernian in the early kick-off. A win over struggling Motherwell would therefore cut the gap at the summit to just a solitary point.

Despite the exertions on Thursday, Gio van Bronckhorst made only two changes to the team that battled past Dortmund. Out went Ryan Jack and Borna Barisic, with Glen Kamara and Fashion Sakala coming in. The changes saw John Lundstram, quite outstanding recently, drop back alongside Connor Goldson in central defence, Calvin Bassey move to left back, while Sakala would be looking to use his pace down the right flank. Lundstram’s slot in midfield went to Scott Arfield.

In hindsight, the changes backfired. The absence of Lundstram and Jack in the engine room may not have been noticeable in the first half, but when Motherwell came back into the game after the interval, it was. The omission of Jack wasn’t explained post-match, but perhaps a change in personnel – Balogun for the tiring Arfield maybe to allow Lundstram to step forward – after the concession of the first goal would have consolidated a lead that would eventually be surrendered.

Despite drawing at Ibrox earlier in the season, Motherwell came into this one without a league win since Boxing Day. Last weekend they came from behind to draw 1-1 with Aberdeen, that being one of three draws in their past seven league matches. Graham Alexander’s side had lost the other four league matches since the resumption of action after the winter break.

They had been hampered by the loss of Tony Watt to Dundee United – the former Celt had netted 10 goals in 24 appearances – and they were further weakened up front when Kevin van Veen, whose goal against Aberdeen was his ninth of the season, failed to recover from a shoulder injury.

Alexander, banished to the stands, made five changes from the Dons draw. One of them was the demotion of Sean Goss, who played a part in Rangers’ journey back from the lower leagues, to the bench. Another ex-Ranger, Liam Kelly, was in goal for the visitors.

With the playing field bathed in glorious sunshine, Motherwell kicked off, attacking the Copland Road end. But they didn’t have possession of the ball for long. Inside the first minute, Sakala burst past Jake Carroll and fizzed in a cross that narrowly missed Aribo. And after Motherwell cleared their lines, Tavernier found Morelos, but his dinked effort hit the bar. Considering the form the Colombian has been in of late, he should have scored.

Ibrox was buzzing. It was one-way traffic, and Kamara spurned a good opening when he fired a Tavernier corner high over the bar. There was some variation with that set piece, and it was the same again after six minutes, when the skipper worked a short corner with Kent, sized up a shot and it took a fine one-handed save from Kelly to thwart him. From the resulting corner, Lundstram headed wide.

The early pressure from Rangers was relentless. Their forward thrusts were enterprising and all that was missing was a goal to break the deadlock. And that almost arrived after 18 minutes when a curling left foot shot from Lundstram was palmed away by Liam Kelly.

The fans were enjoying the fast-paced, energetic start, and three minutes after the Lundstram effort, Rangers were ahead. After forcing another corner on the right, the ball broke to Arfield who worked it back to Kent. He swung in a beautiful cross and Morelos stooped and headed the ball beyond Kelly.

And two minutes later it was 2-0. Kent bobbed and weaved down the left and when his cross was deflected, it fell for Sakala who lashed a left foot shot into the net. That was no more than Rangers deserved for the start they had made, and the fans sat back and expected to see their heroes not only secure three points but also chip away at the goal difference advantage held by Celtic.

But although there was a lot of cut and thrust, there was vey little in the way of clear openings for the remainder of the half. Arfield did try to bend one in with the outside of his right foot, but with a passing accuracy of 89% against an opponent that had yet to register an effort on goal, Rangers were seemingly on easy street.

Initial signs after the restart remained positive, and Tavernier almost added to his 75 Rangers goals after 49 minutes. He worked a one-two with Morelos, but Kelly beat away his shot to the near post. But within three minutes, Motherwell had pulled a goal back.

Lundstram was short with a pass to Bassey who was robbed on halfway by Woolery. The Englishman then showed Lundstram a clean pair of heels before squaring the ball to half-time substitute, Jordan Roberts, who tapped in.

Rangers were rocked but looked to have restored their two-goal lead after 55 minutes. Kent stood up another great cross, and the ball was bulleted into the net by Morelos. His celebrations were short-lived, the flag was up. Morelos was incensed and was booked for dissent. He was right to be aggrieved, and van Bronckhorst was adamant that had VAR been available, the goal would have stood.

But Rangers were uncomfortable for the first time, and the crowd were a little restless. You felt they needed a third goal to settle the nerves, but officialdom denied them again after 67 minutes. Kent played a lovely ball into Morelos, and El Buffalo netted with aplomb. But the flag was raised again. It was another tight call, but the Colombian did look as if he was a shade offside on this occasion.

The single goal lead was a fragile one, and the crowd of 49,318 were edgy when there was a scramble in the Rangers box. The ball was eventually cleared to Morelos, and his great reverse ball sent Sakala clear. After releasing the ball, Morelos was taken out by O’Donnell, but referee Don Robertson played advantage. However, when the ball went dead, Robertson booked O’Donnell. It should have been the right back’s second yellow of the game as just minutes earlier he had been penalised for stopping a cross into the box with his hand.

Disaster then struck. Tavernier got caught on the wrong side of Woolery, and he got the better of Goldson too before shooting beyond McGregor at his near post. The left winger has scored two goals this season, and both have been equalising goals at Ibrox. One must hope that those interventions don’t prove decisive come the end of the race for the titles.

It was a dreadful goal to lose, and the misery was compounded when it emerged that a Motherwell player had been in an offside position in the lead up.

Motherwell now had a new lease of life, Rangers were ropey. But as Kemar Roofe was called back in from his warm-up, Goldson had a chance to score the winner. His shot, however, lacked conviction and was saved by Kelly. And that was pretty much that. Joe Aribo had the last chance of the match not long after he had been named man of the match. He fired high and wide with his left foot, and that summed up the second half for Rangers, wild and well off the mark.

History can have a horrible habit of repeating itself. After a seismic win at Parkhead in December 2019, we were all certain that the title tilt was on. Yet we returned from the winter break and won just three of the first eight league games played after the resumption. Although we haven’t had the same Old Firm result this season, we have again won just three of our last eight games. That’s far from title-winning form.

There are now 10 games left. Gio van Bronckhorst wants to see his team being more clinical in attack and defence, and that must happen sharpish. Since the break, 10 goals have been conceded. In the last two matches around 60 chances have been carved out.

If we are to overturn Celtic’s lead then we must make the most of opportunities like this, you simply can’t surrender a two-goal lead at home.

Lesson learned? Time will tell as the quest for 56 continues.