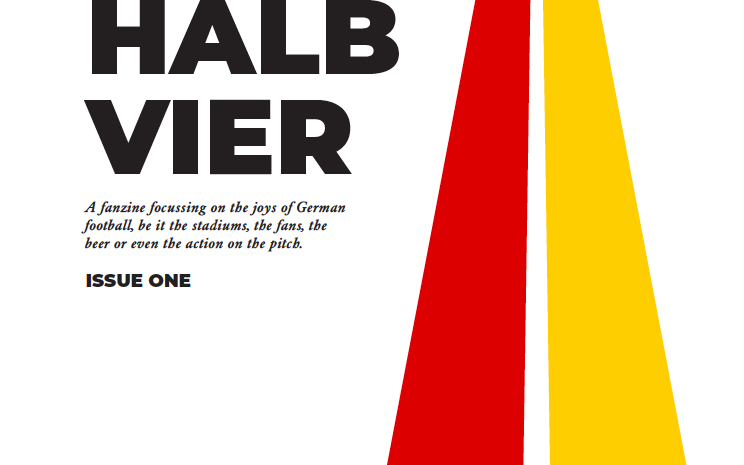 ‘A fanzine focussing on the joys of German football, be it the stadiums, the fans, the beer or even the action on the pitch’

The entry above is the tagline that accompanies the title on the front cover of the English language German football fanzine which launched Issue 1 in early March. It sets out the priorities as well as the general contents of the publication, which cares less about how much Kai Havertz may be sold for, in the next transfer window or the names of the up and coming players attracting the attention of the nationalmannschaft head coach, Joachim Löw. Instead, it is firmly rooted in fan culture and I would highly recommend Halb Vier for anyone with even a passing interest in German football. 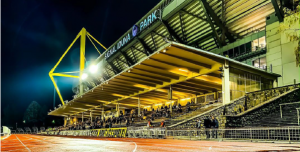 At Ibrox, our most notable links to Germany in recent times have been due to the exploits of Jörg Albertz and Stefan Klos on the pitch and both are still held in high esteem by us all to this day. A particular mention must also go to the growing link between a section of the fans of Rangers and HSV. I am one of those with an affection for Hamburg and its premier football club, having enjoyed quite a few trips over the last few years and enjoying personal friendships with warm hospitality. Other Bears may favour a different German team and some will know what is going on with the Bundesliga and clubs involved in UEFA competitions from televised coverage and the wonders of the internet and social media. 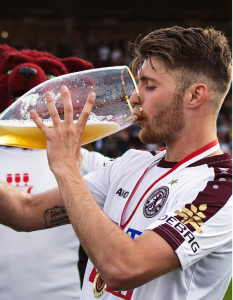 Getting back to the fanzine, the title refers to the traditional half past three kick off time on a Saturday afternoon. Yes, vier is four but the convention of German time speak is to effectively say half before rather than half past as we are accustomed to, in the UK.

The contributors to the fanzine range from ordinary fans, German based expats, groundhopping lower league enthusiasts, to journalists who feature in prominent mainstream publications, amongst others.

The fanzine, priced at £5, proclaims to be proudly analogue in a digital age. I only found out about the zine at the start of April, by which time the print run had sold-out, to its credit. Thankfully, it also comes in digital form and I received a PDF copy from editor, Feargal McEvoy, a long time Fortuna Düsseldorf fan.

The content of the fanzine really is a cross section of fan culture, football tradition, history and politics as a microcosm of Germany as a nation. I particularly enjoyed Dynamo’s war on the DFB (German FA) which is a longform read on the aftermath of a controversial pre-match corteo by the ultras of Dynamo Dresden back in May 2017 prior to an away game in Karlsruhe. That event was another episode in the long running protests of German fans against the authorities against increased commercialisation of the game and vested fan matters.

The detail and depth of the article shows that there is a darker side and an underbelly to the treatment of fans in Germany beyond the popular perception of cheap tickets and pints in standing sections. The very recent ‘Hopp-gate’ protests evidence that this particular duel is ongoing and enduring.

I was entertained and informed by the fanzine, I really enjoyed reading it and I would encourage you to check it out.

Hopefully it is still possible for anyone interested to receive digital copies of the first edition but Issue 2 is due out next month, June. For more info, check out @halbvierUK on Twitter and the website, www.halbvier.bigcartel.com 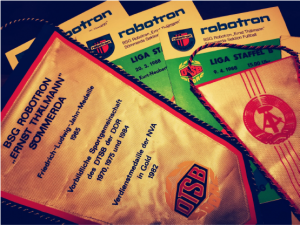