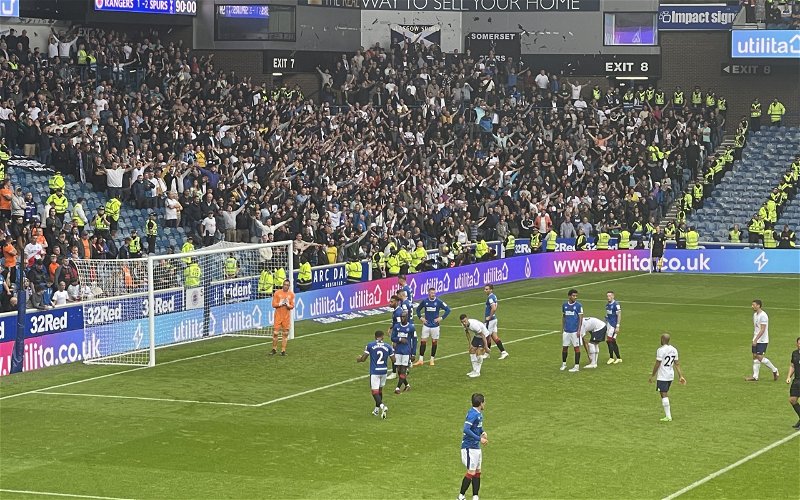 Rangers were narrowly defeated by a strong Tottenham Hotspur side at Ibrox in the club’s last preseason fixture.

Giovanni van Bronckhorst gave first starts to Rabbi Matondo and Tom Lawrence after their excellent performances against West Ham on Tuesday in a side that is very likely to be the one that faces Livingston in next Saturday’s season opener.

Tottenham had most of the ball early on, but Rangers grew into the game more and more with John Lundstram pressing the Tottenham midfield constantly and created a couple of half chances.

The pressure paid off in 24th minute as Rabbi Matondo went on a dazzling run down the right-hand side and crossed it across to Tavernier who flicked the ball onto Colak who made no mistake as he scored his first Rangers goal at Ibrox.

Tottenham tried to get back into the game and Harry Kane came closest in the 33rd minute as he was put through on goal, but Allan McGregor foiled his plans and managed to put it out for a corner.

The London side made changes at half time, and they paid off almost instantly as Harry Kane equalised after cutting in from the left-hand side and smashing the ball past Allan McGregor.

He then put the London side ahead shortly after when Son chested it down after Goldson overcommitted and the striker fired past McGregor.

The Ibrox faithful got their first glimpse of new signing Malik Tillman who replaced Lawrence for the last twenty minutes, with Souttar and Matondo making way for Sands and Wright respectively.

James Sands missed a glorious chance as he headed straight at the Tottenham keeper after a corner with the goal gaping, and that was the last of the real chances for Rangers as the matched petered out and Tottenham held on for the win.

It was a strong performance from Rangers who were facing a side that will have lofty ambitions in the Premier League and Champions League next season, and based on the preseason performances, the club will be more than ready for the start of the season.

Man of the Match: John Lundstram