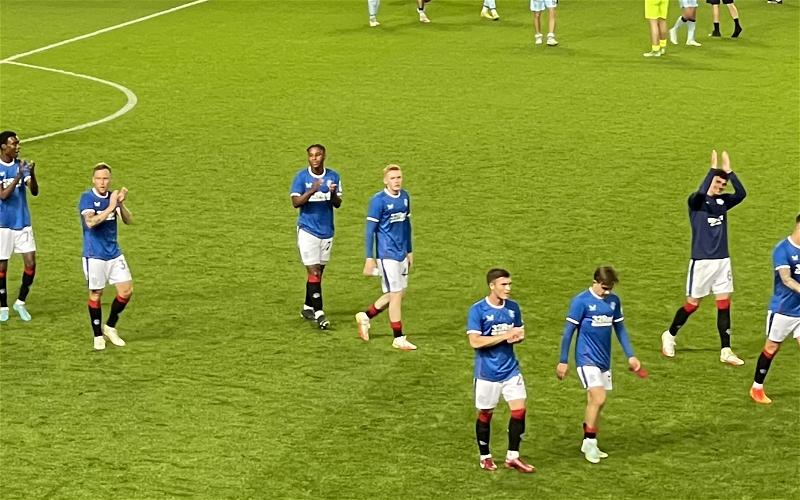 There was game time for no fewer than TEN players aged 21 or under, in a routine win for Rangers in tonight’s league cup tie V Queen of the South.  Giovanni van Bronckhorst spoke glowingly of the crop of talent he has at his disposal, whilst B Team regular Charlie McCann, says there has never been a better time to be a young player at Ibrox as The Gers survived a couple of scares to run out comfortable 3-1 winners a to advance to the quarter final.   This isn’t something Rangers are particularly known for of course (quite the opposite in fact) but, as the likes of Alex Lowry and Leon King begin to feature more regularly (and hold their own) in the first team, the future looks very bright indeed for this group.  In fact, there was so many new faces on show tonight, you almost forgot that King is still only 18 himself as he strolled through the 90 minutes with air of maturity and confidence that simply says ‘I belong here’.

‘We gave debuts to many players from the academy and that’s something very positive’, said Gio  ‘It’s motivation for them to keep working hard and eventually play more games for the first team.  It’s good to see Ridvan (Yilmaz) play and he will get stronger in the coming games.  Overall, I’m really happy with the performances of the young players.  You saw some bright things and the academy is such a big part of the Club.  I love working with and inspiring them and of course giving them the chance to play.’

For Charlie McCann, who injected some much-needed urgency and a little quality into Rangers’ second half display, this was about showing his manager again, what he can do on a bigger stage. Signed from Manchester United a year ago, there are high hopes for McCann and he put in a classy display culminating in a lovely touch in the build-up to Scott Arfield’s decisive third goal.

‘It was a good opportunity for the Boss to give some people a run out.  For all the B team lads it just shows us there is a clear pathway to the first team.  The message is ‘if you are good enough, you are old enough’.   It’s a really positive thing to be a young player at this Club at the minute.’

Let’s be clear, this wasn’t vintage stuff from Rangers and after a bright start, there was much to forget about this game but, with so many changes on top of the afore mentioned debuts being dished out, how could it be? The spark of Saturday’s thumping win against Ross County was gone but, there was still plenty to be pleased about, in particular Robbie Ure capping his debut with the opening goal.  Robbie is no stranger to scoring for Rangers but, the chance he stuck away is the stuff dreams are made off.  Great work from Fashion Sakala down the left, pouncing on a Queens mistake, saw Ure slam home from 10 yards from Kamara’s lay off.  It was very much ‘job done’, with special mentions going to Ridvan Yilmaz who looks a very exciting prospect and of course Scott Arfield who scored a double and  continues to display an attitude, desire and hunger that would inspire any young player.  The two combined superbly well for Rangers’ second on the night after, what can only be described as, a FILTHY piece of skill from Yilmaz before playing an inch perfect pass to the on-rushing Arfield who slotted home.  Arfield’s passion is infectious and you get the feeling he loves every minute of playing for Rangers.

All eyes now turn to Saturday and the first ‘big one’.  Much was made of tonight’s starting line-up and who, from that, will get the nod for the weekend?  For most, the starting XI being trusted to bring home the points from Parkhead, just about picks itself with only one spot up for serious debate.  Does Gio go with an all-out assault and start two wingers in Kent and Scott Wright?  Or is it the slightly more compact approach, where we see something similar to PSV away?  Prior to kick off, I felt Glenn Kamara starting this one, more or less confirmed it.  To me, this very much had Saturday in mind and I fully expected him to vacate after the hour, having gained some much needed minutes, after missing Ross County through injury.  Perhaps Gio felt he needed more time (he was taken off in 89  minutes) or perhaps he just wanted to SEE more from Glenn who, it’s fair to say was a little passive this evening.  Scott Arfield may also have given the manager a headache, with two goals and tenacity that will be required in abundance and let’s not forget the ever-impressive Steven Davis, who strolled through PSV at home to prove yet again (as if he had to) that he is still very much a big game player. The Gaffer remained coy on the subject, as you might expect.

‘We changed a lot today but, it was good to get minutes for players and it was a chance to improve fitness ahead of so many games.  Scotty, I know what he can bring, it’s not as if this was just his first game, I’m well aware of the strengths of him and all my players.  The game at the weekend, the preparation starts tomorrow.’

Whatever starting XI Go goes with, it’s clear to me that we must come out flying.  We said only three days ago that PSV away and the subsequent league performance truly kick-started our season and it’s imperative that we build upon that, and approach the game with the same intensity and desire we have shown this past week.  Yes, we can be a bit more cautious but, any good Rangers performance these past few months, comes with us on the front foot and playing the game in our opponent’s half.  For many of our haters, that lot just need to turn up on Saturday but, it’s a day to take it to them, to fight for the jersey, to stand up and be counted and to show them they aren’t quite as good as the think they are.