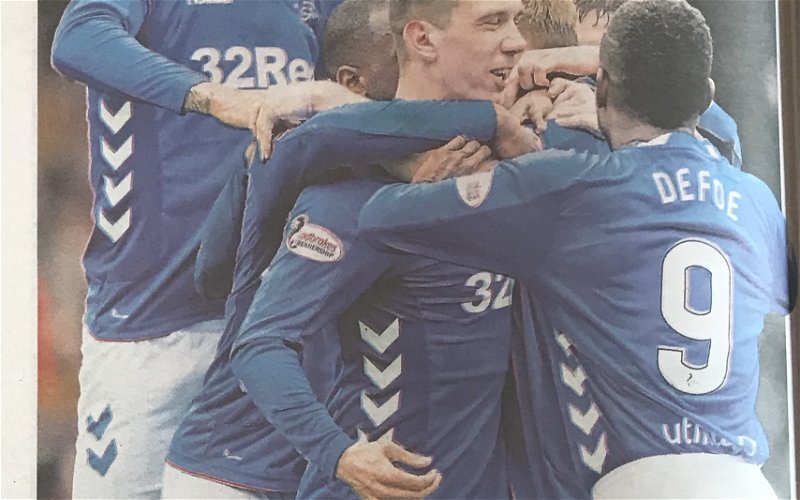 Connor Goldson was signed from Brighton and Hove Albion in the summer of 2018. Since then, Rangers have played 221 matches. Connor has started all but 11 of them. It’s remarkable consistency and he is the bedrock of our defensive line.

Here is a breakdown of Connor’s stats, firstly by competition then season-by-season:

(*) Goldson played the full 120 minutes when the Scottish Cup tie against St Johnstone in season 2020/21 went to extra time.

Note that the stats don’t account for any stoppage time played.

Goldson has played the full 90 minutes in 130 of his 131 league appearances. The only minutes he’s missed are the last 29 of the 1-1 draw against Hibernian at Ibrox on Boxing Day in 2018. He was helped off the field just after the hour mark having soldiered on for the early part of the second half after injuring his ankle in first half stoppage time. With a home game against Celtic on the horizon, there were fears that Goldson would miss out, but the big man showed grit and resolve to step up and play. Despite not being able to walk a matter of days before the game, he worked with the physios and took an injection on the day of the game. He was immense as Rangers won 1-0.

To sum up how important Goldson was becoming, he missed the first three league games after the winter break. The defeat in the first one against Kilmarnock at Rugby Park was a fatal blow as Rangers tried to wrestle the league title back from Celtic.

The last of that trio of games, a 4-0 win over St Mirren at Ibrox, was on 2 February 2019. The next time Goldson’s name didn’t appear in the starting XI in a league match was 11 September 2021. That represented a run of 85 successive league matches, and the sequence was only halted when he missed a 2-1 win over St Johnstone in Perth due to COVID issues.

In European competition, Goldson has played every minute of the ties Rangers have played since he signed apart from the visit to Prague to play Sparta in this season’s Group Stage. It’s not clear why he didn’t travel to the Czech capital, although it may well have been COVID-related.

Goldson’s discipline is excellent too. He has only picked up 29 yellow cards in his 210 appearances. That’s astonishing for a centre back and works out at a card every 7.241 appearances. He’s also never been sent off playing for Rangers or had to serve any suspensions.

That means aside from the five matches mentioned above and an absence through illness when we beat Motherwell 7-1 at Ibrox in November 2018, Goldson has only not been selected when the manager has elected to rest him. That accounts for him missing Scottish Cup ties against Cowdenbeath, Stranraer and Annan Athletic and a League Cup tie against East Fife. He was also on the bench when Rangers beat Ayr United 4-0 in the last eight of the League Cup in season 2018/19.

Goldson’s win percentage is impressive too. Rangers have lost just 11 of the 131 league matches Goldson has played in which means we are undefeated in 91.6% of the fixtures. The 94 wins registered represents 71.76% of the matches. Meanwhile, in European competition, Goldson has made 58 appearances. Rangers have won half of those games and lost only 10.

There is a large amount of unfinished business for Rangers between now and the end of the season. There are three trophies up for grabs, two of which would see the club enjoy the riches of the Champions League group stages once again.

With that possibly on the horizon, it is imperative that we endeavour to get Goldson to sign a new contract. While I don’t want to see my club held to ransom, it would take a large percentage of that Champions League bounty to replace him if a deal cannot be reached.

Despite the above data, Goldson has had and still has his critics. But the consistency and solidity he offers is hard to find, not to mention his threat when he goes forward. Who knows, for example, how vital his goal at Dens Park at the weekend will be come the end of the season?

If we aspire to rub shoulders with the elite in Europe and win more titles on home soil, then we may have to tweak the wage structure to accommodate our own elite players. Connor Goldson is most certainly in that bracket, and I am one Bear who wants to see ‘Goldson 6’ emblazoned on the back of a Rangers jersey for season 2022/23 and beyond.