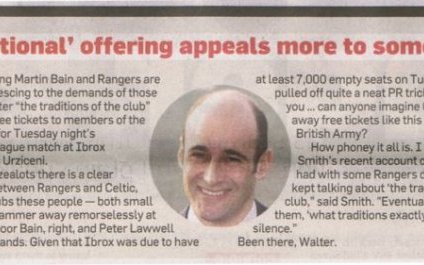 On Facebook yesterday, a user (Brian Campbell) reposted this article which he had originally put up in October 2009 with the following comments.

“Rangers have given 7000 Tickets To Our Servicemen….for this weeks Champions League game. Are RFC pandering to a group of fans – as Mr Spiers implies in this article???? Or is it a recognitions of service for those that deserve it?”

Spiers does of course have a long history both of twisting reality and making himself out to be so much more clever than those who fail to fall for his filth.

The real problem, which he hints at but then leaves unaddressed – is why in the last couple of decades Celtic FC have become increasingly a venue for all sorts of pro-terrorist filth despite the various ceasefires in Ireland now stretching back some 25 years?  The more peaceful Ireland is the more frenzied the behaviour of this who glorify violence in Glasgow.

Indeed, it’s long overdue for the normal Celtic fans who themselves have been servicemen or had relatives serving in the Forces to make the voice of reason heard – but to do that they really do need leadership from the Boardroom to back them up.  Why that is lacking would perhaps make a better subject for an article than one mocking the gesture from Rangers.

Also typical of the way Spiers operates is to hide behind Walter’s petticoats and then to claim the luminosity of his intellect silences his critics – that’s never happened at any exchanges I’ve witnessed when he’s been present.   He can always ask Chris Graham for a return bout!