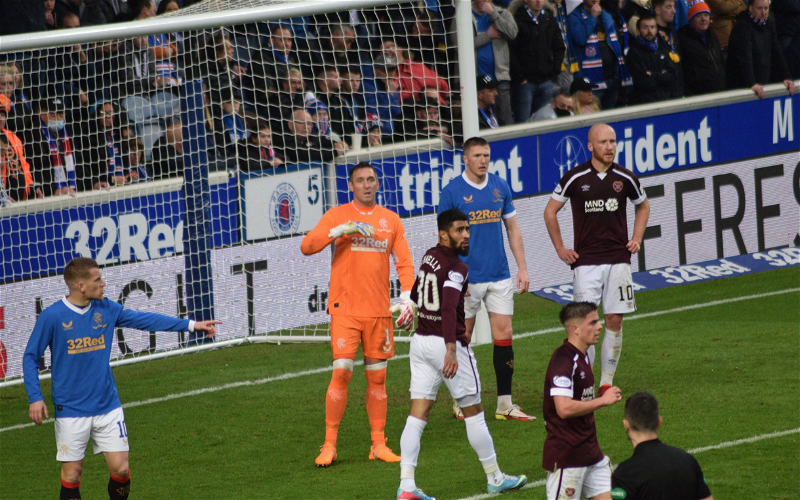 The sky above the Ibrox stands was grey and there was an autumnal chill in the air as another sell-out crowd came to watch a second successive top-of-the-table clash. For the first time since the pandemic began away fans were in The Stadium, and the Hearts fans in the corner between the Broomloan Road stand and the Sandy Jardine stand tried to make themselves heard as the teams emerged. They were drowned out by the home fans, though, who raucously roared and went through several renditions of some popular Rangers anthems. ‘Four Lads Had A Dream’, the subject of some outrageous coverage recently on social media, has never been sung louder or prouder than it was at 3pm.

There was a sense of anticipation ahead of kick-off. Rangers had been superb in the second half against Hibernian, and it was hoped that that would be the springboard for a run of consistent displays both at home and abroad.

After making six changes for the 2-1 victory over Hibernian, Steven Gerrard made just one this time, captain James Tavernier coming back in at the expense of Nathan Patterson. Robbie Neilson followed suit, his solitary change being at the heart of defence, with John Souttar returning from injury.

There has been much talk in recent weeks about the number of permutations in the Rangers front three this season, but Gerrard stuck with the trio he had used against Hibernian. Kemar Roofe, who many expected to start the match after his excellent performance last time out, returned late from international duty with Jamaica, but managed to make the bench. Would he make a similar telling contribution against Hearts as he did against Hibernian?

Rangers kicked off attacking the Broomloan Road end shaping up in what looked like a 4-2-3-1 formation. With the Lundstram and Kamara in a holding role in front of the back four, Joe Aribo started on the right, Scott Wright on the left, while Ianis Hagi took up a more central role behind the enigma that is Alfredo Morelos. The Colombian was about to endure his most infuriating 90 minutes of the season so far.

The home side started on the front foot, and after five minutes, the ball broke to Wright who brought out a diving save from Gordon. Morelos followed up, but his attempt was blocked for a corner. It was an excellent start from Rangers, and Gordon was once again called into action when he smothered a shot from Hagi shot.

The Romanian had a swagger about him in the early stages, but his ire was raised when he clashed with Cameron Devlin as the ball went out for a throw-in. Referee Dom Robertson had a word with both players in a bid to diffuse the situation and calm both players down as tempers frayed.

And then came the first of what would be a catalogue of missed chances for Alfredo Morelos. After fine play from Wright, Morelos had room to manoeuvre in the box, but his first touch was heavy, and the chance was gone. The Colombian was then picked out by Aribo and he should have done better than pull his left foot shot wide of the far post.

It was a breathless start to the game. Hearts had their backs to the wall, and after 15 minutes, Alex Cochrane was the first player to be cautioned after he fouled Glen Kamara. Tavernier took the resultant free kick and found Goldson who should have at the very least worked the goalkeeper. Instead, he headed the ball over the bar.

Scott Wright and Ianis Hagi were at the heart of the positive attacking play from Rangers, and after a lovely touch from the latter, Lundstram released Barisic, and his cross found Morelos. Unfortunately, rather than make a telling connection with the ball, the Rangers number 20 took a fresh air swipe when well placed to open the scoring.

There was a touching moment after 24 minutes as applause rung round the stands for the young Rangers fan, Courtney McNiven, who tragically passed away on 9 October.

Hearts shouted for a penalty shortly afterwards when Boyce was outmuscled by Balogun. It would have been soft, and just a minute later, the Nigerian centre back should have given Rangers the lead. From a free-kick 35 yards from goal, Tavernier’s delivery found Balogun and when he headed on to Goldson, the latter’s header across the six yard box was cleared for a corner. And from that corner, Craig Gordon made a remarkable triple save from Balogun to keep the score at 0-0.

Rangers were camped in the Hearts half, and on the half hour, Hagi should have done better with a header from a Tavernier cross. Lurking behind Hagi was Morelos who looked to be better placed for an effort on goal. Hagi then found Morelos with header, but John Souttar was at full stretch to intervene.

Lundstram and Kamara were linking well as Rangers dominated in midfield. The former was superb once again, and he made a telling contribution five minutes before the interval. With Steven Gerrard animated trying to coax one last push from his players with half time approaching, Goldson played a fantastic cross-field ball pass to Hagi. He took the ball down on his chest and when his cross broke for Lundstram, the Liverpudlian showed great composure, taking a touch before bending a superb right foot shot into the net.

The atmosphere was electric, and the goal was the least Rangers deserved for their first half endeavours. Hearts had barely offered anything in an attacking sense and were perhaps fortunate to leave the field at half time only one goal behind.

The early part of the second half suggested that the remainder of the game would follow a similar pattern. Two minutes after the restart, Aribo got into a shooting position but chose to slip a pass to Hagi. The ball fell behind the Romanian, but he managed to get a shot away. It was blocked back to Aribo whose left foot shot was also repelled, the ball spinning high into the air before it was eventually cleared.

There was a composure about Rangers, and Hagi should have done better after 51 minutes after the ball was squared to him by Kamara. He sclaffed his shot wide of the target, and Kamara almost created another opening when he released Wright. Wright’s shot was blocked by Gordon, but the flag had already gone up for offside. Morelos then fired wastefully over the bar, another good chance for the Colombian and he should have done better.

Perhaps a portent of things to come, a couple of loose passes were creeping into Rangers’ game. Hearts were enjoying more possession and growing in confidence as the game reached the hour mark, and Allan McGregor was called into action when snuffed out the danger as Devlin looked to create an opening.

Both sides made changes, with a tired-looking Wright replaced by Bacuna, while the visitors introduced Josh Ginnelly for Ben Woodburn. And Bacuna almost made an immediate impact, cutting inside onto his right foot, but his shot was smothered by Gordon.

Although not as fluent as they had been in the first half, Rangers were still in the ascendancy, and it took a last-ditch challenge from Stephen Kingsley to thwart Morelos. There seemed to be an air of inevitability that the second goal was coming for Rangers, but there was still sloppiness in their play and after Boyce broke clear, McGregor made a stunning save. It wouldn’t have counted as the flag was up on the far side, but less than a minute later, Barrie McKay was in the clear only to see his shot blocked by legs of McGregor. Devlin then shot from distance, but McGregor saved again.

The pace of the game had dropped, and the value of Allan McGregor was illustrated in that passage of play. Gerrard looked to his bench to reinvigorate Rangers, and with fifteen minutes remaining, he brought on Davis and Roofe for Aribo and Hagi. The latter could feel aggrieved to be withdrawn, as he had been a thorn in the side of the Hearts rear-guard throughout the match. As an example of this, a minute prior to his substitution, his superb ball had released Aribo who found Morelos, but El Buffalo scuffed his shot wide.

It’s fair to say that this wasn’t one of Alfredo Morelos’ better games. He was enigmatic at best, and he passed up a gilt-edged chance to secure all three points after 84 minutes. With tension rising as the game entered the closing stages, Kemar Roofe burst clear after lovely pass from Bacuna but his shot hit Gordon and spun onto the post. Roofe then turned provider a few minutes later when he teed up Morelos for a tap in. Inexplicably, Morelos slid the ball wide of a gaping goal.

That raised the ire of the Rangers fans, but it didn’t deter them. The noise level reached a crescendo again with five vital minutes remaining. And they were stirred up further when following an altercation on the touchline in front of the dugouts, Robbie Neilson was shown two yellow cards for his protestations.

Rangers should have been out of sight at this stage, but a one-goal lead is a precarious one. And hearts were in mouths when the visitors forced a corner as four minutes of stoppage time were announced. Gary Mackay-Steven took it and when the ball skidded off McGregor’s gloves, the former Rangers youth player, Craig Halkett, rose at the far post to nod in the equaliser. It was an awful goal to lose – aside from the rare error from McGregor, Tavernier should have been tighter on the Hearts defender – and it summed up Rangers’ season thus far.

Yet again it was the proverbial game of two halves. Nobody would have batted an eyelid had Rangers been three or four goals ahead such was their superiority. But Jekyll and Hyde came to the fore again and that sums up Rangers’ season thus far. We should be boasting a 100% record after nine games, but slackness has cost us dearly. The defensive solidity that we prided ourselves on last season has been conspicuous by its absence, and we need to be more clinical at the sharp end of the field too. But let’s round this report off on a positive note. Despite our indifferent form, we top the table, and if we find that consistency over the course of 90 minutes then we should pull away from the chasing pack. As Mr Struth said, ‘let the others come after us, we welcome the chase.’