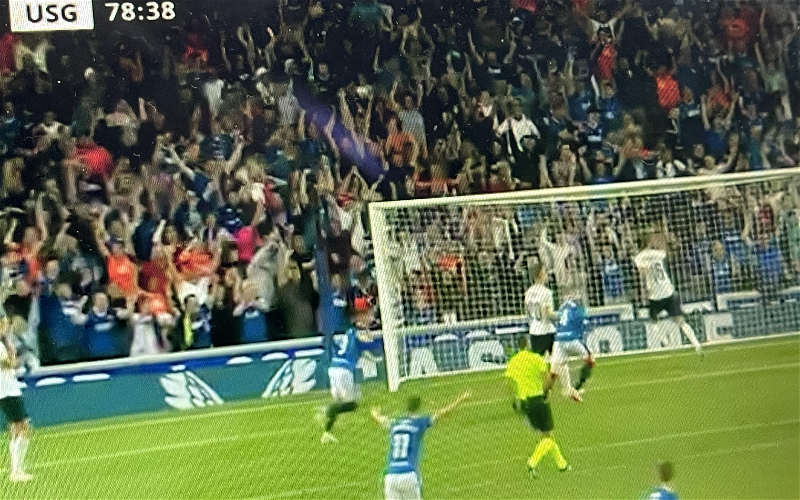 Last season the Rangers supporters gorged themselves on a diet of fine football fayre. Almost every Thursday they enjoyed nights under the lights as their heroes pulverised visiting teams to reach the Europa League Final. But as delicious as the dining experience was, it wasn’t at European Football’s top table.

A club of Rangers’ stature should have a regular seat at said table, yet the last time they made the Champions League group stages was back in season 2010/11 under the guidance of the late, great Walter Smith. That raised the stakes ahead of this one as Gio van Bronckhorst and his players looked to right a few wrongs after their insipid performance in Belgium last week.

When the team lines were published you could understand if there was a collective puffing of cheeks among the Rangers support. To say van Bronckhort’s selection was bold would be an understatement. There were two changes from the XI that had eventually broken Kilmarnock’s stubborn resistance at the weekend. Out went Steven Davis and Scott Wright, and in came Scott Arfield and Ryan Kent.

On paper it was difficult to see what the formation would be. Would Arfield slot in alongside Lundstram and form the ‘2’ in a 4-2-3-1, or would the shape change completely to 4-1-4-1? And given that Lundstram has adapted and played in the heart of the defence in Europe you could see a daring 3-4-3 as a possibility too.

As the teams completed their warm up and sprinted up the tunnel to finalise their preparations, the atmosphere cranked up several notches. It had been a red hot day of sunshine in Glasgow, but the temperature in the Ibrox cauldron was white hot when the teams emerged. Given their lack of experience at this level it was hoped that that would strike fear into the Union SG players, and you had the feeling that this would be yet another special night in the stadium. The fans were doing their bit, it was now up to the players to do the same.

There was a cacophony of boos as the players broke away to their respective ends and Union SG engaged in a huddle. The Rangers players weren’t fazed though, there seemed to be a steely determination etched on each player’s face. The focus was on the job at hand.

After Antonio Colak got proceedings underway, it became apparent that the formation would be 4-1-4-1. Scott Arfield and Tom Lawrence were in central midfield, with Malik Tillman and Ryan Kent in the wide areas. John Lundstram would be the anchor man, and the Englishman was masterful. He always seemed to have time and space when he received the ball and he drove the team on throughout the match.

Rangers made a positive start They were aggressive and on the front foot, forcing a series of corners and pinning their opponents back. Kent and Tillman were prominent, while Lawrence was posing a threat with his dead ball deliveries and thrusting darts into advanced areas.

The first real opportunity arrived after eight minutes. Rangers were awarded a free kick for foul on James Tavernier. The skipper took it, and his superb delivery picked out Colak but the striker’s header was a fraction too high.

Rangers were relentless, prompting and probing. They didn’t let Union SG settle, and for large parts of the opening exchanges there were 21 players inside the opposition half of the field. But after 10 minutes, Lawrence was robbed, and Union SG broke forward. McLaughlin gathered the cross from Dante Vanzier easily, but it was a warning that the Belgians could pose a threat in an attacking sense too.

Defensively the visitors were disciplined too. They presented a thick white line with five across the back. It was akin to a home match in the Scottish Premiership, with that deep, low block proving difficult to breach.

Tom Lawrence was one player who endeavoured to break down the barrier, though. He made a brilliant burst through the heart of the pitch and fed the ball to Tillman. His low cross was cleared and following a subsequent interchange of passes, the ball almost ended up with Arfield getting played in on goal.

Some slackness started to creep into Rangers’ play. After 18 minutes, a loose pass from James Sands was seized upon and suddenly Union SG had a corner. From the delivery, Siebe van der Heyden missed the target with a free header. Goldson was then short with a pass to Tavernier who ended up in a 50/50 challenge with the opposition captain, Teddy Teuma. The latter bore the brunt of it but was fit to continue after some treatment.

Union SG seemed to have weathered the initial storm and were enjoying more possession although they were not posing much of a threat. That spell of possession caused ripples of frustration to move around the stands, and that seemed to kickstart another spell of attacking intent from the home side.

After 27 minutes, Kent won a free kick in a promising position. Lawrence took it, an inswinger with his right foot. It was a wonderful delivery that picked out Colak who drew a superb reaction save from Anthony Moris. Lawrence then worked himself into a shooting position but bent his right foot shot a fraction wide of the keeper’s left-hand post.

Sands picked up the first yellow of the game after 38 minutes, but it was a case of taking one for the team. He was sold short by a poor pass from Kent and took out Lazare Amani on halfway after the Union SG number eight had nicked the ball past him.

With half time approaching things were getting a little tousy and the Rangers fans were becoming increasingly restless. But then the breakthrough came a minute shy of the interval.

Barisic floated in a cross that looked to be harmless until van der Heyden stuck out his arm. The ball bounced off it, and it was a penalty of the stonewall variety. It was a tie-defining moment, and the Rangers captain played his part, Tavernier stepping up and executing a perfectly struck penalty to halve the aggregate deficit.

The needles intervention of van der Heyden changed the dynamic of the half-time team talks in the respective dressing rooms. Rangers had fallen out of the game after a promising start, while the visitors were starting to enjoy the fact they were upsetting the home side and their supporters. But now Rangers had a new lease of life ahead of a what would be a massive second 45 minutes.

There was a frantic start to the second half, strewn with errors from Rangers that left van Bronckhorst cutting an exasperated figure in the technical area. The game swung from end to end, Amani firing high and wide before Colak took a heavy touch in the box after Rangers immediately broke to the other end.

There were signs of activity on the Rangers bench, with Rabbi Matondo readying himself. But before any alterations could be made, we were all level at 2-2. Lawrence’s deep delivery was cut back by Tavernier, and when Arfield’s shot was saved, Colak showed great predatory instincts to head home the rebound. The Croatian was heavily criticised for his first leg performance, but he is starting to show that he is a different proposition to Alfredo Morelos. He is more of a penalty box predator and having those different options can only be beneficial for van Bronckhorst as the season progresses.

Rangers were now imbued with confidence and sought a third goal. And it almost arrived on the hour mark when Lawrence teed up Lundstram. The midfield general thumped a left foot shot towards the corner of the net but was denied by Moris who sprang to his right to parry the ball away.

Rangers made their first change after 64 minutes, the pacy Matondo coming on for Arfield. As expected, the Welshman took up position on the right, with Tillman moving into a more central role.

Then came a moment of controversy and the rare sight of a referee admitting he had made an error. McLaughlin’s pass out from the back was woefully short, but Sands lunged in and won the ball. The Greek referee clearly felt the American had fouled his opponent and he blew for a free kick and looked to have flashed a second yellow towards the Rangers centre back. However, after consulting his linesman, he reversed his decision. It was a key moment as the prospect of facing the last 15 minutes and possibly extra time could have been a daunting prospect for Rangers.

Union SG were coming into the game again, and after 75 minutes, McLaughlin intervened to deny Simon Adingra. The Rangers goalkeeper had had little to do, but he was smartly off his line to block the Ivorian’s attempt. Amani was then booked for a poor challenge on Kent which kicked off a series of events that saw the game being punctuated by a number of fouls for some pretty reckless challenges from Union SG.

But with the fans starting to contemplate the prospect of an extra half hour, Rangers edged ahead with just 12 minutes to go. They won a free kick after Matondo was taken out around 35 yards from goal. The ball found its way out to the left, and when Kent teed up Barisic, the left back hung a teasing cross to the far post. It looked to be a comfortable claim for the Union SG goalkeeper, but Tillman towered above him and nodded Rangers 3-0 in front. Cue bedlam.

Immediately after the goal there was a double change for Rangers. Having escaped a red card, it was understandable that Sands was withdrawn – Ben Davies took over – and what better way to keep a team that need a goal occupied than to introduce Alfredo Morelos.

El Buffalo came on for Colak, and while he is still short of fitness, he did enough during his late cameo to almost get on the scoresheet. After 85 minutes his snapshot was pushed wide for a corner, and a couple of minutes later he seemed to get caught in two minds when Kent released him with a lovely slide rule pass. Moris raced off his line to avert the danger, but the Union SG goalkeeper would not have been so lucky had Morelos got any kind of touch to a Kent effort that fizzed across the face of goal.

The latter opportunity came during five minutes of added on time, and it was during that spell that Union SG showed the most attacking enterprise they had done all night. They had a late flurry but didn’t really cause McLaughlin any great concern. And their night of misery was compounded when Amani picked up a second yellow card.

Ibrox was once again rocking as the referee signalled the end of the match. The stadium is just different on nights like this and it is clear that the players derive so much energy from the atmosphere the fans create. There will be more nights like this to come, with one more hurdle left to negotiate before Rangers can get themselves back to that top table.

The name PSV Eindhoven conjures up memories of a sublime Bobby Russell goal in 1978 and a magnificent performance by Michael Mols at Ibrox in 1999. It is to be hoped that more memories are created by the current crop next Tuesday when the Dutch side, led by their scorer on that epic night in 1999, Ruud van Nistelrooy, come to town.