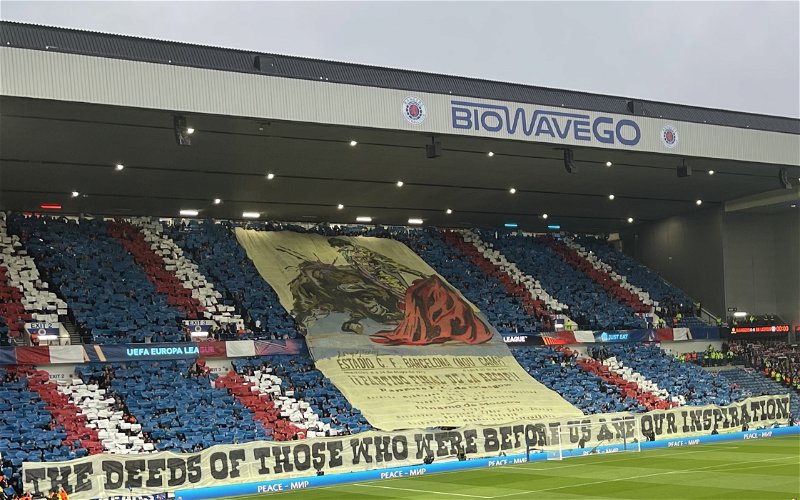 It is 1,847 miles from Brechin on the East Coast of Scotland, to Seville in the South of Spain.  A long arduous journey that is unlikely to be taken by many. Yet this is the journey Rangers football club have been on for the last 10 years. In July 2012 Rangers played Brechin in the 1st round of the Ramsdens Cup and now on the 18th May 2022 they will play Eintracht Frankfurt in the Europa League Final. Just take a moment to let that information sink in. Ten years ago Rangers could barely find enough players to field a team. They had been to hell and back in the six months preceding the game versus Brechin as the club was pushed to the very edge of existence.

Thursday saw Rangers complete their journey back from the edge. There were false starts along the way and more than a few obstacles in their path as they ascended through the Scottish leagues, culminating in their 55th League title last season.  And whilst the 55th league title felt like reaching the top of the mountain, it was in fact only Camp 3 on the side of Everest. On Thursday night Rangers ascended even higher and reached the Final of the prestigious Europa League. There is a belief amongst this group of players that they can win this trophy and if they do they will have surely reached their Everest.

Tonight’s game was played in front of a crowd who created a tumultuous atmosphere inside Ibrox. The grand old lady has seen some momentous European ties before, and its stanchions have been shaken and rattled to the core, but tonight the crowd decided to take things to another level. Just before 7.45 pm the players made their way back down to the tunnel to rapturous applause and a guttural roar from all four sides of Ibrox. There followed a moving tribute to the legendary kit man Jimmy Bell, who died unexpectedly earlier in the week. As a video montage played on the screen the whole of Ibrox, including the RB Leipzig fans, stood and applauded. It was a moving tribute to a much loved member of the Ibrox backroom staff.

With nearly fifteen minutes to kick off Ibrox was already full, and not a spare seat could be seen. The teams were read out over the tannoy but no one could hear the Rangers team as the stadium erupted into song. Despite the fever pitch of noise and excitement there was a definite feeling of nervousness around Govan. The fans knew RB Leipzig could play and that despite the banners saying Make us Dream, maybe cold harsh reality would kick in after the match started. As the teams emerged from the tunnel an enormous banner of a Barcelona 1972 poster filled the middle of the Broomloan stand with a message underneath that read “The deeds of those who were before us are our inspiration.”

After eighteen minutes it was the Rangers captain who was inspired as he ghosted in at the back post to fire home Ryan Kent’s cross. Six minutes later and the dream was becoming a reality, but in the best possible way, as Glen Kamara had now given Rangers a 2-0 lead with a wonderful left foot shot into the bottom corner of the net. There was bedlam in the stadium as the crowd took in the enormity of what they had just witnessed. People hugged, bounced, and sang whilst others just looked on in disbelief. Half time arrived and for the 1st time in nearly an hour everyone stopped and took a breath.

With Rangers forty-five minutes from a 2nd European Final in 14 years the game restarted and the volume was turned back up. Rangers won a corner and it was cheered like a goal. But then after seventy minutes Ibrox was hushed. Nkunku finished superbly and for the first time that evening the 2,000 RB Leipzig fans were heard. There was a lull for a few minutes as Ibrox took stock of how the game was poised before once again the crowd roared Rangers back into life. They knew they had to play their part tonight, the team needed their help to get them over the line.

With ten minutes remaining Rangers won a corner, the ball was cleared but only as far as Ryan Kent who sent a looping cross to the far post. The goalkeeper failed to deal with the cross and the ball fell to John Lundstram who passed the ball into the net with his left foot. Ibrox exploded with noise as supporters celebrated a seismic goal. The elation was universal and electricity coursed through the stadium as the celebrations continued in the stands. Sevilla was calling and this time it felt like those dreams might just come true.

The clock ticked down, every clearance was cheered, every throw-in contested. There were sharp intakes of breath as RB Leipzig tried to fashion a chance that would save them in the tie. Lundstram went steaming into a 50/50 and came out with the ball and Ibrox erupted with the same volume of a last-minute winner. Three minutes of injury time was displayed and thirty seconds later the whistling began, the tension palpable. RB Leipzig won a corner, the goalkeeper raced into the Rangers box, hoping to become a hero, but the Rangers defence stood tall and dealt with the danger.

And then it was over. Rangers had done it, they had reached the final of the Europa League. Tears of joy were shed by many fans as the sheer enormity of what they had just witnessed slowly began to sink in. The Ibrox PA blasted out ‘I’m Feeling It’ and the players and crowd sang it back to each other in unison. This was a special moment which will live long in the memories of both players and fans.