In for the Kill-ie – Rangers 2-O Kilmarnock 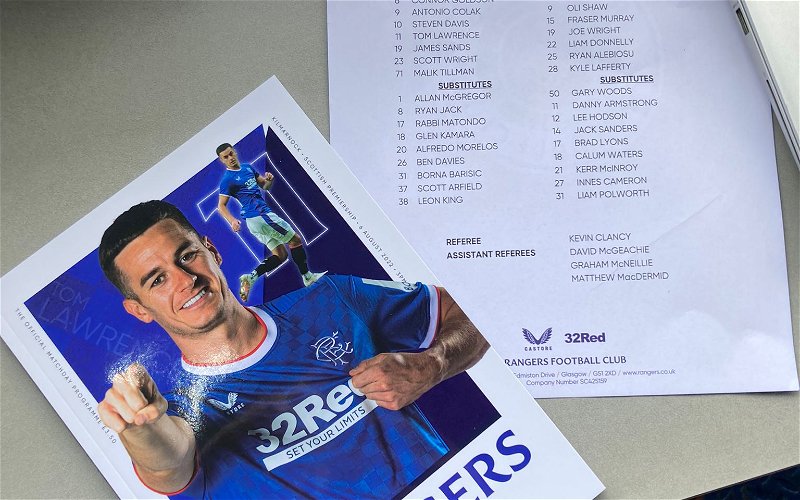 The storm clouds had gathered around Ibrox after Tuesday’s insipid display in Belgium against Union SG. At a club like Rangers a crisis is never far away, so it was imperative that Gio van Bronckhorst and his players got things back on an even keel when they welcomed last season’s Scottish Championship winners, Kilmarnock, to G51 for the first home league match of the season.

As expected, there were changes to the XI that failed to sprout in Belgium. There was a first start at left back for Ridvan Yilmaz, and Steven Davis came in to anchor the midfield alongside John Lundstram. Further forward, with Ryan Kent still absent, Scott Wright and Tom Lawrence came in to play alongside Malik Tillman. But the biggest roar when the team lines were announced around 10 minutes before kick-off came when Alfredo Morelos was named as one of the substitutes.

Rangers have certainly missed their talisman. With the crucial return leg against Union SG only days away, it was hoped he would get an opportunity to get some minutes in his legs after missing 16 games since he last played for the first team against Dundee at Dens Park on 20 March.

After two successive games clad in the red and white alternate kit, the Rangers players emerged ahead of the 3pm kick off resplendent in royal blue. Kilmarnock’s players were top to toe in yellow, with Oli Shaw and Rory McKenzie flanking a player that was familiar to the home support.

Kyle Lafferty had had two reasonably productive spells as a Rangers player, scoring 44 goals in 167 appearances. The most memorable of those goals were arguably the hat-trick he scored at Rugby Park to clinch the league title in season 2010/11. After a spell in Cyprus with Anorthosis Famagusta, Lafferty had returned to Kilmarnock in January 2022, scoring eight times in 15 league appearances as the Ayrshire side returned to the top flight.

It was Lafferty who got proceedings underway, and although the visitors posed a threat down the right inside the first minute – Ryan Alebiosu’s cross was eventually gathered comfortably by Jon McLaughlin – they very quickly retreated and set up a deep, low block. This type of tactical approach from teams visiting Ibrox on league business is nothing new, but lacking the creativity of Kent, the onus was placed upon the shoulders of Wright, Lawrence and Tillman to provide the positive spark required.

With Lawrence starting on the left, Wright on the right and Tillman in the number 10 role, the latter two almost created the opening goal after only three minutes. Wright thrust forward and played Tillman in, but although the American got the ball out of his feet and got a shot away, it was saved by Sam Walker in the Kilmarnock goal.

Tillman, in particular, made a lively start, and Antonio Colak looked as if he was out to prove a point too. He had been heavily criticised for his performance in Belgium, but he looked eager and hungry to get involved throughout. Indeed he almost profited when he got the break of the ball after nine minutes but he dragged his shot across the face of the goal.

Rangers build up play was encouraging. They were patient and probing for openings, and inside a five-minute spell, the home side had a couple of openings. For the first one, a superb ball from Tavernier released Wright, but his cross was too high for Lundstram. And a couple of minutes later, a surge forward by Tillman was halted illegally by Alan Power. That gave Rangers a free-kick in similar territory to that from which James Tavernier scored the winning goal at Livingston. Alas, on this occasion, the Rangers captain fired his effort over the crossbar. Scott Wright then had a shot from the edge of the penalty area that was pawed away by Walker.

The movement from middle to front was fluid, but the killer pass was proving hard to come by. This caused exasperation in the crowd when Rangers had a numerical advantage in one attack only to fail to exploit it when Wright was wasteful with his attempted pass. The former Aberdeen man was once again prominent and made himself available, but while there was no faulting his enthusiasm, too often he lacked an end product.

After 26 minutes the 49,600 crowd witnessed the closest we had come to a goal. The ball dropped to Lawrence 25 yards out, and the Welshman executed a dipping volley that rattled off the crossbar. That roused the crowd who save from the ever-effervescent Union Bears, had been quiet.

With half an hour gone, we had witnessed plenty of huffing and puffing from Rangers, but the effort from Lawrence aside, we had seen no sign of them blowing down the yellow-brick wall erected by the visitors.

And it was much the same for the rest of the first half. Although Rangers forced a few corners and had a couple of shots from distance, they didn’t trouble Walker or force him to make any saves. It was starting to get a little frustrating and the natives were getting restless.

There were no changes at half time, but most were asking how long it would be before Matondo and Morelos got the call. The answer would be sooner rather than later.

Five minutes after the restart, Gio van Bronkhorst took time out from prowling the edge of the technical area to instruct Morelos, Matondo and Borna Barisic to warm up. Perhaps Colak noticed this, as within a minute he intervened to break the deadlock. The Croatian seized his chance after some slack play by Kilmarnock, feeding the ball to Lawrence. The Welshman then played Colak in on goal, and he rifled a right foot shot into the net. The roar that greeted the goal was laced with sighs of relief as Kilmarnock’s obdurate defence had at last been breached.

A couple of minutes later there was a big shout for a Rangers penalty after the ball seemed to strike a hand in the box. The appeals were waved away by referee Clancy, but it looked like Rangers had been hard done to. We therefore await the introduction of VAR with bated breath.

Lundstram sent a looping header on to the roof of the net, but all eyes were now on the home dugout. It was time to get El Buffalo back. And after 64 minutes the home support rose in unison to acclaim the Colombian’s return. It was like the return of the prodigal son. Barisic and Matondo also came into the fray, Ridvan, Wright and Colak the players departing.

Although Morelos looked a little heavy, he didn’t take long to make his presence felt. After a couple of early touches, he found himself with a sight of goal. Steven Davis, who bossed the game without appearing to break sweat, broke forward and tried to play in Tillman. His pass was intercepted, but Lawrence picked up the loose ball and played it to the Colombian on the right. The fans rose in anticipation, but unfortunately Morelos dragged his right foot shot across goal and wide of the far post.

You had to expect that after so long out of action there would be some rustiness and that was apparent after 73 minutes. The impressive Tillman played Morelos in, but he was robbed of possession before he could get a shot away.

Lafferty departed a couple of minutes later. There was a round of applause from the home fans for the former Rangers man, but he had done little to ruffle the feathers of James Sands and Connor Goldson. Rangers made a change too, Scott Arfield coming on for Tillman.

Similarly to Goldson and Sands, Jon McLaughlin has been a spectator for the most part. Kilmarnock offered very little in an attacking sense even after losing the goal. But experience told the supporters that Rangers still had to tread carefully as one mistake could be fatal, precious points could still be frittered away. And that may well account for the anxiousness that greeted a flurry of attacks from the Ayrshire side that brought them three corner kicks in quick succession.

From the first, the ball broke for Danny Armstrong but his shot was deflected wide. From the second, McLaughlin punched the ball as far as Power and his long-range effort was deflected over. From the third, the danger was averted by a clearing header at the front post. The hero of the hour again was Alfredo Morelos.

Rangers were making heavy weather of things now. You could sense the grumbles and groans, and there was a collective one when somewhat bizarrely the man of the match award went to Connor Goldson. That’s not any disrespect to the vice-captain but given how little Kilmarnock had offered it was hard to understand why a centre-back would have been the game’s standout player. Steven Davis or Tom Lawrence would have been a more worthy recipient.

Rangers were keeping possession but didn’t seem to be looking to make that penetrating pass. Then, with two minutes to go, it happened. Like the Rolls Royce he is, Davis moved up a gear as he won the ball in midfield and drove forward. His pass released Matondo and when his cross eventually reached the the back post, Morelos had a tap in. Once again there a sense of relief in the roar that followed more than anything else.

It had been workmanlike at times from Rangers, but they got the job done in the end. There will be plenty more games of this ilk as the season progresses. Three points were all that mattered, but this provided another chance to get the new players knitted into the system and, of course, the fans welcomed their darling back too.

The bandwagon keeps rolling, next stop a massive Champions League qualifier against Union SG on Tuesday. Will Morelos start? Will Ryan Kent be fit? Will the two-goal deficit be overturned? So many questions that need to be answered.

In the meantime, however, the quest for 56 league titles has begun.