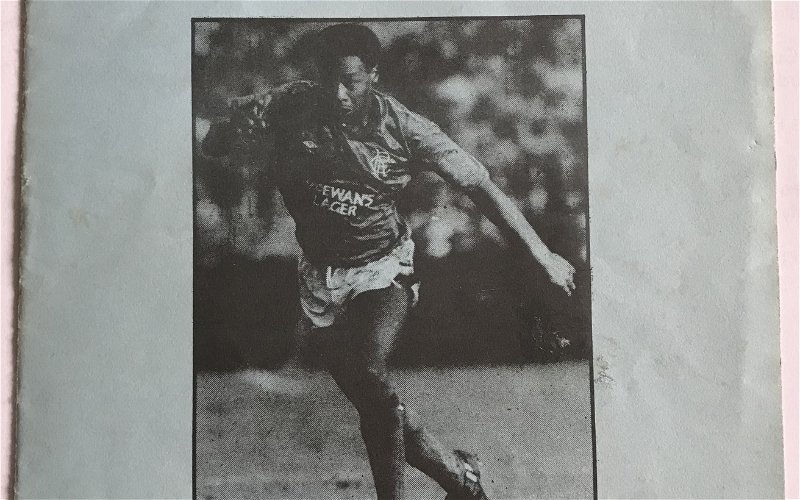 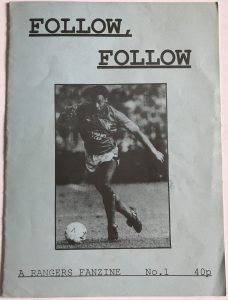 I first came across fanzines in the bedroom of my cousin John, he would go on to be showbiz editor of the Daily Record – John was always a music nut and started his own punk fanzine called Stand And Deliver.  Through that I was introduced to the world of fanzines – sending off a collection of stamps to the value of the mag to obscure addresses in London or the likes Market Harborough and getting back a collection of inky pages where people raved about the next big thing – or life in general.

I had a sense of what fanzines were, but in those days they were almost exclusively about either music or films.  Then the tidal wave of football fanzines engulfed the UK and I was quickly hooked – of the ones from those days When Saturday Comes still exists as a monthly distributed through shops.  The best Scottish ones, in my option, were The Absolute Game and AWOL.  AWOL was my favourite although it only ran for about 8 issues – produced by the Meadowbank Thistle Brake Club – witty, caustic and showed that football fans were not mindless morons.

Luckily I had a pal who owned a Mac and a LaserWriter –  for the first few issues he would leave me in his office and I would type and layout overnight and then pop the keys through the door and head off with the raw copy for the zine in my paws.  Cut and paste some photos and cartoons and then off to the printer.  John and Scott who had helped inspire the zine sold or wrote for it for about a year before rejoining the real world.

The zine first saw the light of day against Hamilton at the old Douglas Park – I nervously announced to the world in general “Follow Follow Rangers fanzine” – for the first few seasons you had to explain to people what a fanzine was and that it wasn’t the programme.  That first day I had an encounter with the worthy Accies fan “Fergie” – a legend of sorts due to his foul language barrages, he came around the corner with an entourage of urchins in tow – “Follow Follow?  Follow fucking Follow?  FUCK OFF!”

The response via the post to the first few editors was thankfully better than that!  Fairly quickly the Govanhill Gub introduced himself at Ibrox and he’s remained a legend ever since!  His somewhat manic messageboard posts hide a deep and abiding knowledge and love of the club – his writings in the fanzine remain my favourites.

Gubby would be joined by other regulars – sadly Little Boy Blue and QV Loyal are no longer with us – full in their various ways of opinion and the talent to express them – The Major, PaisleyProd, Mufasa, Bearwood Bear, Davie Edgar, Scotbear, SM.  Some played only a fleeting visit, said what they had to say and then moved on – Sam Scotland and Dom the English guy studying in Edinburgh contributed some brilliant cartoons and then disappeared.  The same was true for Robert Burns as a writer amongst others – one day the articles  stopped coming and letters to them came back marked “Gone Away.”

One of my major motivators for starting the fanzine was that in the media I simply didn’t see the lives, reality and attitudes of myself or the guys I went to the game with properly represented.  I don’t mean a polished PR blurb – I just mean that the reality of my life as a Rangers fans didn’t exist in the printed media or the electronic media.  Sadly, that largely remains the same today.

However there is hope – one thing I know from the fanzine and, later, the website is that Rangers fans comprise a huge pool of talent for the club if only properly led and channeled.   The fanzine has made ideas popular that once only existed in same circles of activists – we’ve made people think.

Over the next weeks and months we’ll look back at the highs and lows of the last 30 years through the prism of Follow Follow.  I hope some of you will contribute to that.

I’ve had this recurring vision over the years that in the future some researcher will find a cache of the old issues of the zine and realise “My God, I didn’t know about this.”

The fanzine has been my way to record my loves, hopes and despair about our wonderful club and hopefully make a wee difference along the way.

Davie Edgar interviewed me for a couple of episodes of Heart and Hand about Follow Follow the fanzine and the website.  I hope you can find the time to listen to them.

(Sound quality is not great!)