Kent Will Tear You Apart, Again 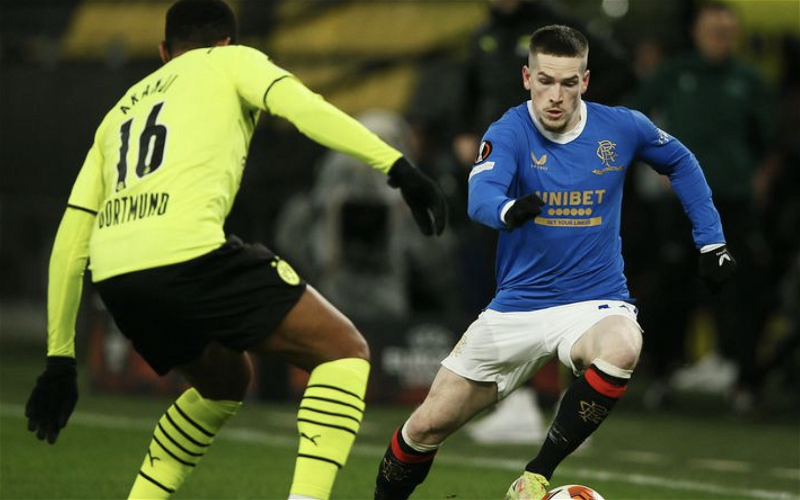 Football supporters the world over love a player that gets them on the edge of their seat when they receive the ball, ones that generate that buzz of anticipation around the stadium. And over the years at Ibrox we have been blessed with many that fit into that category, the likes of Willie Henderson, Davie Wilson, Davie Cooper, Mark Walters, and Brian Laudrup immediately springing to mind.

Those five players have many things in common. The principal thing is they provided a creative spark; they are artists. But they didn’t always have the brushstrokes to produce a masterpiece, and these wide men could also frustrate in equal measure. And the man that creates and frustrates in the current squad is Ryan Kent.

We were excited when Kent arrived on loan from Liverpool in 2018 and then implored the club to find the money to make the deal permanent after he netted six goals and claimed nine assists in 43 appearances during his debut season in a Rangers jersey.

Season 2019/20 yielded eight goals – including one at Parkhead – and four assists, but Kent’s best season numbers-wise came on the road to 55 in season 2020/21. In 52 appearances, Kent scored 13 goals and created 15, but last season his return of three goals and 20 assists in 46 appearances drew criticism. And when across the city, Jota netted 13 goals and claimed 14 assists in 40 matches, it was perhaps the goal return of the Portuguese that was the catalyst for some sections of the support to look for more from Kent.

Injury kept him out of a couple of matches in the early part of the season, and prior to the Ross County match the critics were out in force again, with Kent only claiming one assist in five appearances. And in the matches against Livingston and Hibernian, Kent only fired five shots at goal. Two of them were blocked, while three missed the target. There wasn’t much that was unfamiliar about that, though; aside from a goal against West Ham in a pre-season friendly, you have to go back to Belgrade in March to find the last time Kent found the net for Rangers.

But what is often overlooked is that the expectation on Kent isn’t the same as your stereotypical winger. If you look at his heatmap from the midweek win in Eindhoven then you see a player that likes to hug the touchline, but also works incredibly hard up and down the left-hand side of the pitch:

Kent’s role isn’t just about creating chances and scoring goals, it’s more than that, and we would see that against Ross County.

With the Ibrox stands still throbbing after Champions League group stage qualification was secured, Rangers made just one change from the seismic win over PSV midweek. The injured Kamara dropped out and Scott Wright came in. That gave rise to a change in shape, with van Bronckhorst setting up his starting XI in a 4-1-4-1 formation.

Initially, the formation didn’t appear to impact Kent much. He was patrolling his usual beat on the left flank, and the man tasked with policing him was Callum Johnson. Johnson had joined Ross County from Portsmouth in the summer, and his first test came two minutes after the two minutes past three kick-off. Much of the early play came down the right flank, but when Kent was found by Barisic, he ran at Johnson, dipped his shoulder, cut inside and sent a dipping right foot shot a fraction over the crossbar.

But as the half wore on, we witnessed Kent taking up positions infield. Although Johnson often left him in lots of space when Rangers attacked on the opposite wing, Kent wasn’t hugging the touchline like he had done against Hibernian the previous week and drifting as he did allowed him to link up well with the likes of Tom Lawrence and Malik Tillman. When he did station himself wide left, he would offer himself short to Barisic or spurt away looking for a through ball. 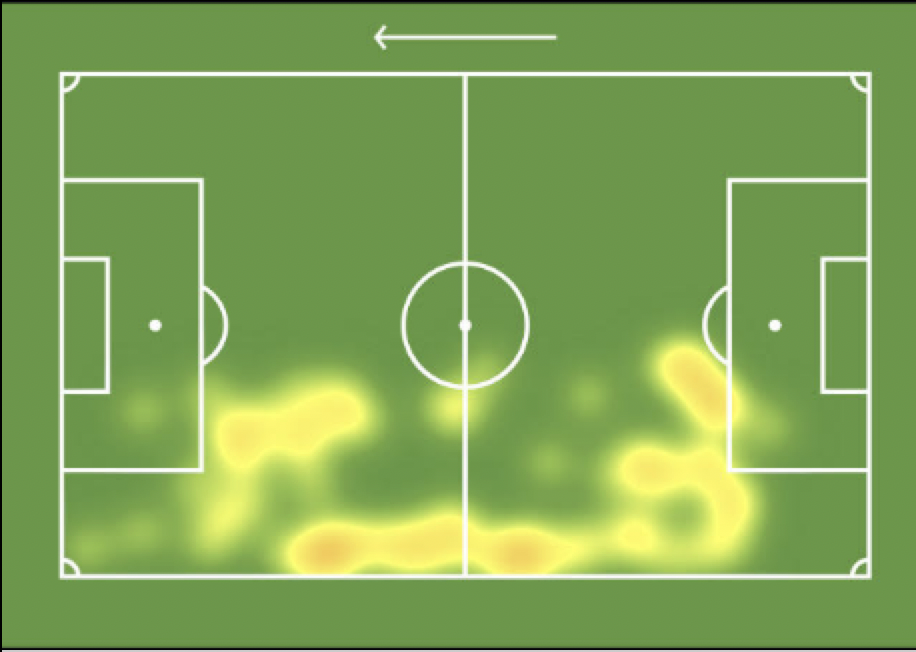 Ross County set up as we expected they would with a low block. But they struggled to deal with the fluid movement of Rangers, and after nine minutes, the home side should have been ahead. When the ball breaks in the six yard box, one of the last people you expect it to fall to is Connor Goldson. Maybe the Rangers vice-captain was surprised too; although he hit the target, Ross Laidlaw made the save.

A minute later we saw Kent drift again. He won a free-kick, and when the ball worked its way out to Wright, Kent called for a pass on the edge of the box. Wright’s pass didn’t reach him, but again we were seeing Kent playing more centrally than he has done of late.

Kent’s next involvement saw him engage in some lovely interplay with Colak. The move broke down, but the ball broke to Lawrence and his shot is deflected wide for a corner. This once again showed that Kent is more than just a winger who can create and score goals. He has an involvement in a number of promising attacks, and it is short-sighted to judge him if he doesn’t apply the finishing touch or provide an assist.

Although Rangers were on the offensive and pinning Ross County back, Kent had flitted in and out the game. In the opening 17 minutes he had touched the ball 12 times and made just eight passes. He had surrendered possession twice. However, much of the good play from Rangers was stemming from Tillman and Lawrence as illustrated by the fact that Wright posted similar numbers to Kent; 14 touches, 11 passes, possession lost on three occasions.

But around the 20-minute mark, Kent burst to life. He picked up the ball in space and fizzed in a brilliant low cross that Colak was unable to turn in. And a minute later he danced to the byeline and picked out Tillman. His effort was saved by Laidlaw, and the Ross County stopper denied him again after 22 minutes when he pawed away the USA international’s shot.

Rangers were showing no ill effects from their exertions in Eindhoven, and after 24 minutes, they hit the front. The ball was funnelled out to Kent on the left, and after he ran at Johnson and cut inside, he rolled the ball into the path of Lundstram who bent a shot into the net via the head of a defender.

Kent was more involved now. After another darting run, his cross was cleared, and then his sumptuous cross only just evaded Colak. From the corner, he took a swing with his left foot but in the end, it was neither a cross or a shot.

But then we saw the other side of Kent. After 31 minutes he tried to be too elaborate and was robbed by Johnson, and four minutes later he lost composure when he worked himself into a shooting position. After brilliant chest control from Lawrence in the heart of the pitch, the Welshman motored forward and played Kent in. He beat his man then lashed a left foot shot high over the bar. It was a clear sight of goal, and he should at least have hit the target.

Six minutes before the interval, Rangers doubled their lead. It was the other wide man, Wright, that claimed the assist on this occasion, bursting to the byeline and teeing up Colak for sixth goal in seven games.

The half drew to a close with Rangers coasting, but Kent almost carved out a third goal in stoppage time. On the left-hand side of the pitch, he checked onto his right foot, and his deep cross was headed against the bar by Tavernier.

It had been an impressive half from numerous players. Lawrence and Tillman had provided attacking thrust and Kent and Wright had played their part too. And Colak had done what we have come to expect from him, scored a goal.

Comparing the data and half time heatmaps of Kent and Wright showed that both wide men had adopted different strategies: 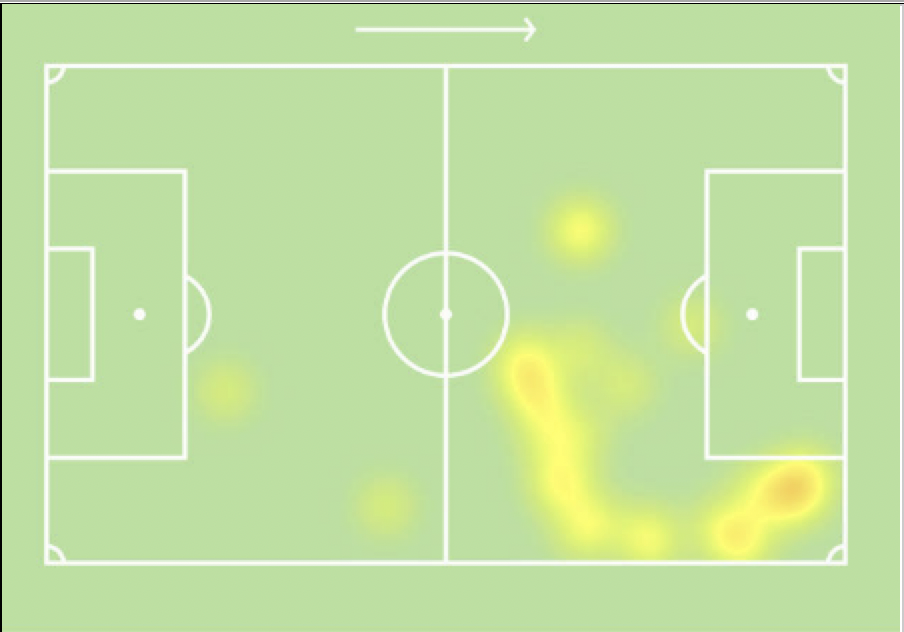 What was apparent was that Kent, in particular, was drifting infield much more than we have seen in other matches this season when he has tended to stay wide. Wright also seemed more likely to head for the bye-line than Kent too.

James Sands, booked in the first half, stayed inside after the interval. With an Old Firm game next weekend, it was a sensible decision. Leon King replaced him, but the change didn’t affect Rangers as they effortlessly maintained their first half momentum.

After 53 minutes a lovely spin and pass from Kent released Barisic. His cross was flicked wide by Colak, but the move once again illustrated how Kent brings others into the play. And a minute later, he almost had that elusive goal. After a shout for handball when Wright’s cross is blocked, the ball came to Kent. He cut inside on to his right foot and his curling shot was headed off the line.

Kent’s game would end after 61 minutes – he was given a well-earned rest when he was replaced by Rabbi Matondo – but three minutes before his withdrawal, he provided his piece de resistance. He once again drifted infield to link with Tavernier before nutmegging a defender and linking with Lawrence. He then intelligently rolled a perfect pass in for Colak to get his second. It was a fine piece of play from Kent, and his overall performance will have gone a long way to silencing some of his critics.

He ended the match with two assists, and a passing accuracy of 88.2%, with five of his passes falling into the ‘key’ category. He still needs to add more goals to his game, but there is no doubt that Rangers creative edge is blunted when he doesn’t play.

After 71 minutes Colak was denied his hat trick by another good stop by Laidlaw and that would be his last action. He now has seven goals in nine games this season, and although eyebrows were raised when he was replaced by Steven Davis, the veteran proceeded to produce a finish that the Croatian would have been proud of to seal the 4-0 victory. With 10 minutes to go, Wright played the ball over the top for Tavernier. And the captain claimed yet another assist when his cross found Davis who let the ball run across his body before netting with a left foot shot.

It was a routine win in the end for Rangers. There was no hiccup or bump in the road in this one and the quest for 56 league titles is still very much alive and kicking.

And as for Ryan Kent? Perhaps the arrival of other players with that wee bit of guile like Tillman and Lawrence will lighten the load on him and we will see his numbers continue to improve. His performance in this one suggests that Kent is all set to start tearing teams apart again. 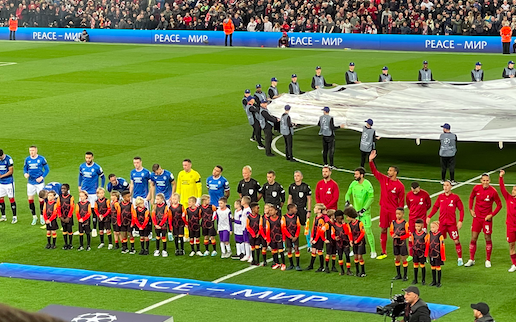 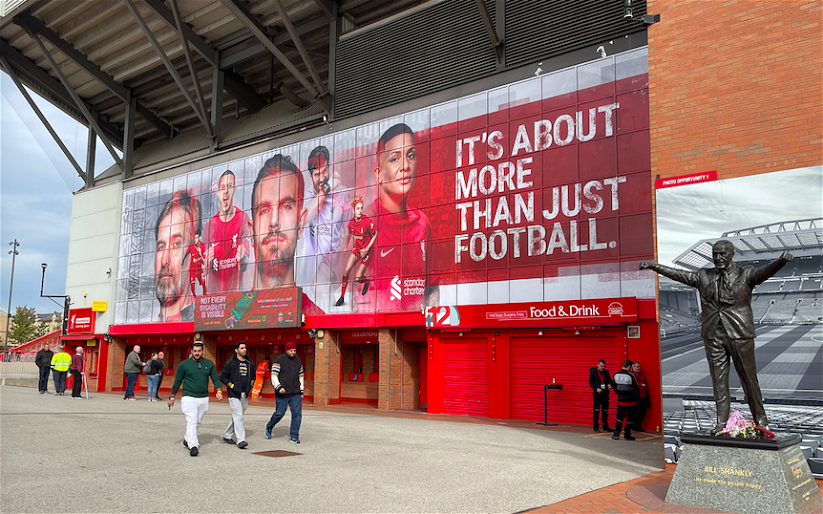