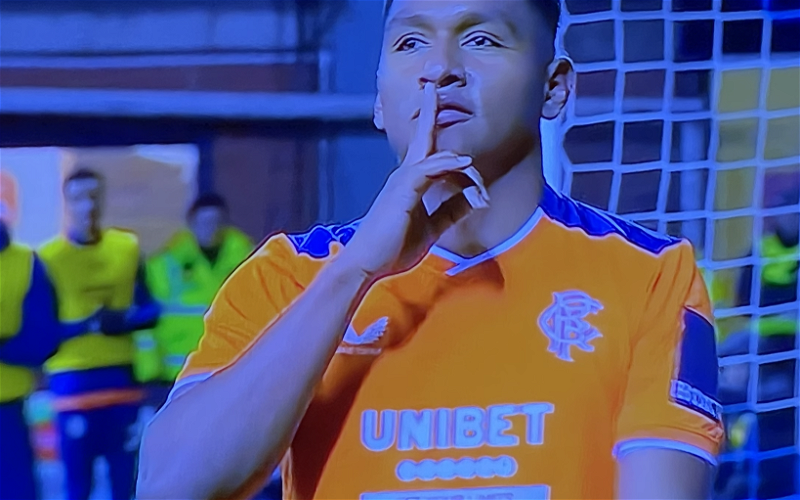 LAYING A BOGEY TO REST

Rangers, Rugby Park, and the early part of a New Year don’t tend to go well together. Back in January 2019, Steven Gerrard’s side came back from the winter break and lost 2-1, and just over a year later, they went down to the same scoreline, conceding twice in the last 13 minutes.

Both of those results disrupted the tilt for the title in those two campaigns. Psychologically, the blows inflicted were damaging, arguably fatal. And although defeat in this match wouldn’t have a huge bearing on the race for the 2022/23 Scottish Premiership – most fair-minded Rangers fans would admit that we only have a slim chance of regaining the title – defeat could derail what has been a promising start to the Michael Beale era.

With six wins from seven and a Cup Final to look forward to, Beale has breathed new life into what was a ragged Rangers side in the dying embers of Gio van Bronckhorst’s reign. Although Rangers have played in fits and starts under Beale and are still seeking consistency, there is a different, more positive vibe about the squad.

And that positivity would be needed at a venue where Rangers always find it tough. Two wins from the last nine visits is a damning statistic, and Rugby Park has become something of a bogey ground for the Light Blues. When you add to that that only Celtic and Livingston had managed to register a victory in Ayrshire this season, you could sense that this wasn’t going to be easy.

With the dulcet tones of Ian Crocker and Ally McCoist coming through the sound bar – I choose a beer and the armchair rather than a Bovril and the biting chill that we’ve been experiencing in this part of the world of late – the action got underway.

Rangers, showing three changes from the XI that defeated Aberdeen on Sunday, were clad in orange and navy blue, but Kilmarnock as Crocker admitted made a ‘lively start’. They forced a series of corners in the opening five minutes, and from one of them they took the lead. And Jon McLaughlin, in for Allan McGregor as Beale rotated his goalkeepers once again, didn’t cover himself in glory. He was caught in no man’s land as Chris Stokes rose and bulleted a header into the net.

Rangers hadn’t ‘learned their lesson’ according to McCoist. Moments earlier, Ash Taylor had headed narrowly wide from a corner on the opposite side, and once again this Rangers side looked vulnerable at set pieces.

Remarkably, it was the ninth time this season that Rangers had conceded first, but the stat flashed up in the bottom corner by Sky gave us a positive to cling to. Rangers had accrued 15 points from losing positions, more than anyone else in the league.

Kilmarnock showed no signs that they were content with just the single goal. McLaughlin flapped at another cross from Danny Armstrong, and Rangers were ruffled. Armstrong looked to be continuing the form he had shown against Celtic at the weekend and he was tormenting Rangers down the right. And a couple of minutes after a Goldson header had drawn a decent save from Sam Walker, he jinked inside on to his left foot and bent a shot towards goal that drew a smart stop from McLaughlin.

‘They are right in about Rangers,’ said McCoist. But we didn’t need our greatest ever goalscorer and one of the best co-commentators in the country to tell is that. It was plain for all to see.

But one thing that Rangers have shown under Beale is fighting spirit and resilience. And after 23 minutes they were level. Sakala snuck in behind the Kilmarnock defence and squared the ball for Morelos to tap in. Taunted by the home support from the outset, the rotund Ranger now had 13 goals in 11 games against Kilmarnock.

The game settled into a pattern of possession play for Rangers, but there wasn’t much cutting edge. Neither Scott Arfield or Ryan Kent had been seen much as an attacking threat, and ‘scrappy’ was an operative word to describe the action.

After 36 minutes, Morelos picked up a yellow card, his fourth of the season. ‘Now he’s walking the tightrope,’ mused McCoist, and any time the Colombian is cautioned you do get the fear that his evening may end prematurely. Fortunately, it didn’t on this occasion.

The closing moments of the half saw Kyle Vassell shoot straight at McLaughlin before Kent did likewise at the other end. But that was pretty much that for a rather insipid and uninspiring first half.

On their last away trip in the league at Tannadice, Rangers had been similarly lethargic in the opening half, but had responded with gusto at the start of the second to secure the points. And the initial signs of a repeat were promising when Rangers burst forward in the first attack of the half. But Kent overcooked a simple pass to Sakala and the chance was gone. ‘Shocking,’ opined McCoist before offering a public apology for a case of mistaken identity when it came to the Kilmarnock player that had been spun by Sakala in the lead up to the first goal. Even the great and the good make mistakes, Alistair.

But Kent’s next involvement was more positive. Tavernier fired a high ball forward and Kent was in the clear. He seemed ‘reluctant’ to shoot according to Ian Crocker, but when his initial cut back found its way back to him, he didn’t need a second invitation, cutting on to his right foot and firing a shot into the bottom corner.

As supporters we’ve been imploring Kent to add more goals to his game, and the freedom he’s getting under Beale seems to have given him a new lease of life. He was becoming more and more weary as a winger under Gio, but he’s starting to show his best form again. Long may that continue.

It was a lively spell for Kent. Within minutes of his goal, he picked up a yellow card for a foul on Armstrong. It was rash and the referee was indeed ‘spot on’ as McCoist said. But there are few in this Rangers squad that can create chances to score that hard currency of goals than Kent can.

Just shy of the hour mark, it was 10 v 11. Armstrong, already on a booking, went in late on Barisic. It was the proverbial ‘no brainer’ for referee, Kevin Clancy. ‘I don’t have a lot of sympathy,’ said the Super one. ‘I’m away for an early bath, stupidity.’ On second viewing, the raised elbow could actually have earned Armstrong a straight red card.

It was now one-way traffic. Morelos and Sakala failed to communicate when Barisic hung up a cross, the Colombian heading high over the bar, but you felt that the next goal would go to the visitors. ‘Rangers are biding their time,’ said Ian Crocker as the clock ticked on to 70 minutes.

And less than two minutes later, the third goal arrived. Barisic scooped the ball across and there was Morelos stepping away from his marker to nod the ball into the net. It was an opportunistic goal, and love him or loathe him, Morelos causes defences problems. His goal return for Rangers – 119 in 251 appearances – fits into the ‘impressive’ category.

He almost completed his hat trick too. He did what Alfie does, hustled, harassed, harried, but his left foot shot was parried by Walker. It was his last involvement too as Beale elected to replace him with Malik Tillman.

Rangers looked to be cantering to three points, but a fine left foot volley from Joe Wright with five minutes to go reduced the arrears to a single goal and had Crocker suggesting that it ‘wasn’t so comfortable’ for Rangers any more. It prompted McCoist to suggest that perhaps Morelos had been taken off too early too.

Tillman drew another save from Walker and Arfield dallied when he perhaps should have had a shot at goal, but it was Kyle Lafferty that set hearts fluttering when his speculative shot from range drew a save from McLaughlin.

It was starting to get a little uncomfortable, needlessly so. And it took ‘top class defending’ according to McCoist from Goldson to snuff out a late threat from the home side. But the shrill blast of Clancy’s whistle ensured it was seven wins from eight games for Michael Beale.

‘It wasn’t without issues,’ summarised Ian Crocker, while McCoist was of the opinion that Beale had ‘steadied the ship’ although they had been helped on this occasion by the red card.

It wasn’t pretty again, but a resilient Rangers continue to pick up points. Success breeds success and long may that continue. The quest for 56 may be forlorn, but there’s plenty to play for. We are winning games now, grinding them out, when in the latter days of Gio we were carelessly spilling points. That’s a massive positive, which suggests that season 2022/23 can still be a silver-laden one for Rangers.