In a week when Lech announced a new sponsorship deal with e-commerce behemoth Ali Express, Rangers will be aiming to ensure that there are no points in store for them on Thursday evening as Europa League group stage action returns to Ibrox.

The two sides had contrasting results on Matchday 1. Rangers will be looking to add to their impressive win in Belgium in contrast to Lech, who will be aiming to get their first points on the board, following a 2-4 defeat at home to Benfica.

Lech are named in honour of the mythical founder of the Polish nation (of the same name) and they are from the city of Poznań in the centre-west of Poland. The club’s origins are traced back to 1922 and due to a long standing affiliation with the Polish state railway, they are known as the Kolejorz (Railwaymen) in the local tongue. At their reconstructed modern Stadion Miejski, with a capacity just over 43000, the main Ultras group are also known as Kolejorz. 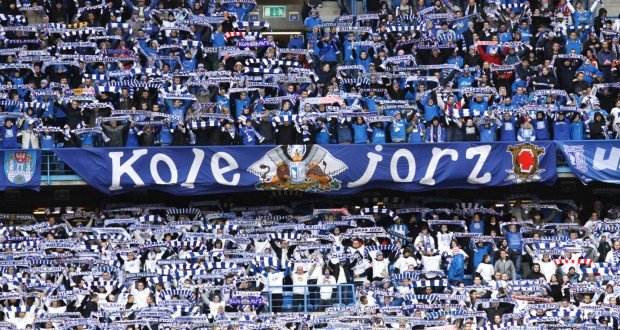 Most Rangers fans will be familiar with the fanaticism of organised Polish supporters, given our recent home and away experience last year against Legia Warsaw. It is a shame that the current restrictions prevent a similar showing from an away support which would have contributed to a proper European spectacle.

On the pitch, again Steven Gerrard’s men will fear no foe. As pointed out in last week’s preview article before the Standard game, Rangers are adept on this stage and are generally tactically astute in the face of our opponents. Lech will be aiming to test that resolve and given that they put two goals past Benfica, who only scored their fourth in added time, they will be respected accordingly. 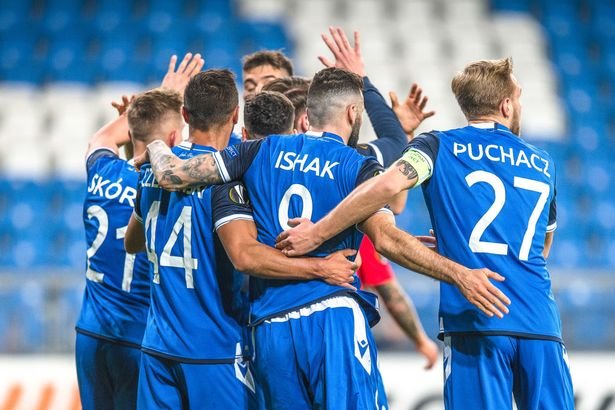 In Lech’s last five games in all competitions, they have not kept a clean sheet and have not won in their last three games. Over the course of that period, they have scored 10 goals and conceded nine. The Gers will be out to ensure this ubiquitous flow of goals will continue in their favour.

Portuguese playmaker Pedro Tiba is said to be doubtful for the game in a blow to the visitors but they are likely to welcome back centre-half Lubomir Satka, an important figure who missed out on the Benfica opener.

Ahead of the game I spoke to Ryan Hubbard, the Leicester based author of the book ‘From Partition to Solidarity: The First 100 Years of Polish Football’. Ryan is a Polish football aficionado and contributor to several mainstream outlets such as ESPN and FourFourTwo on its matters of football and culture. In conversation, he provided further depth on Rangers latest opponents.

FF – Lech Poznan are known as Kolejorz, what is the significance of the trains and the link to the old Polish state railway, in the culture of the club?

Under communism, however, the association with the industry became more of a reliance upon it. With clubs funded solely by their assigned sponsor, Lech’s history as a railway club meant that they were favoured over other, historically successful clubs also assigned to the industry – notably Polonia Warsaw – even if the state railways were considered one of the more destitute sponsors.

Still, it was under the patronage of the railways that Lech collected their first league and Cup titles in the early 1980s, while three more Polish championships, between the fall of communism in 1990 and the ending of the partnership in 1994, helped to ensure that the railways would forever remain a part of the club’s DNA.

Stadion Miejski has been reconstructed and modernised in recent times, at significant cost. Has there been any legacy for the club and support, positive or negative, since the re-build and hosting of games at Euro 2012?

Like every other stadium in Poland, the modernisation of the Stadion Miejski was out of necessity rather than luxury. By the late 1990s, it was clear that the decaying and decrepit concrete bowls dotted all across the country were no longer fit for purpose, and lacked the safety and security features required to curb the hooliganism problem that blighted Polish football.

The construction of the new ground has been nothing other than a positive. The stunning stadium, with all of its mod-cons, has elevated the matchday experience for fans, while the improved security and safety features have helped the club to attract a new generation of supporters into the stands.

Lech are no strangers to European football over the last decade. Has the club progressed in this time and also, how would you rate the level in the Ekstraklasa overall? Mindful of Rangers’ hard fought, narrow victory over Legia last season.

Lech have been a club in transition for a few years now, and with progression to the Europa League group stage, it finally feels as though they have emerged on the other side. The Kolejorz scored thirteen times and conceded only once, as they progressed through four qualifying rounds – despite being unseeded against both Apollon Limassol and Charleroi. Given that they are the first Polish club to reach a European group stage since Legia Warsaw made the Champions League in 2016/17, it can be considered no mean feat.

Ironically, the Polish game currently finds itself in a similar situation to its Scottish counterpart. Like how the level of the Scottish game is arguably dependent on a healthy rivalry between Rangers and Celtic, Polish football can only benefit from a strong rivalry between its own biggest clubs: Lech and Legia. While Lech have been forced to watch Legia lift titles with little challenge, Poland’s European coefficient has tumbled. Now, with Lech seemingly ready to compete with their rivals once again, there is a hope that Polish football will benefit.

What is the mood in the Lech camp toward this EL campaign, following the opening matchday 4-2 defeat to Benfica?

Following the draw, Benfica were seen as the strongest team in the group by the majority of Lech supporters, so victory in their group opener wasn’t expected. However, despite the loss, the performance was commendable, and the two goals scored have given the Kolejorz the confidence that they can turn a few heads.

But a result against Benfica would have been a bonus. Now, against Rangers and Standard Liege, the pressure begins to mount; points are needed against both if Dariusz Żuraw’s side harbour any hopes of progressing to the knockout stages.

Comments are closed on this article.