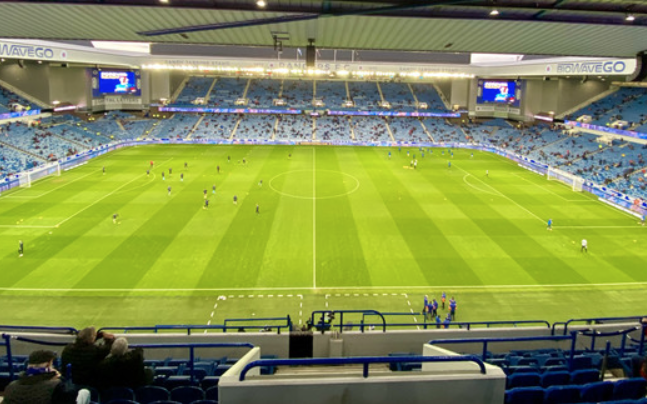 Rangers marched to their fourth successive victory under Giovanni Van Bronckhorst this afternoon, dominating Dundee at Ibrox from start to finish, during an energetic performance, in front of an impressive 49628 crowd.  It was a game that many fans, and indeed, GVB himself felt they should’ve won by a lot more but, that may well have been cruel on Adam Legzdins in the visitors’ goal as he produced a string of fine saves, in an inspired performance to keep the rampant home side at bay.

‘I’m very happy with the performance’ said Van Bronckhorst, ‘at home games we have to be dominant and show them they can’t get anything here.  We created a lot of chances and it’s only a 3-0 score line due to their goalie having an excellent day with some great saves.’

It’s been an impressive start to Gio’s managerial career at Ibrox.  After ruthless attacking displays against Sparta and Livingston, it was more of the same today as Rangers worked the visiting ‘keeper no fewer than FOURTEEN times. For Van Bronckhorst though, the main objective begins at the other end of the field and maintaining ‘the zero’ as he delightfully puts it.  Just like Wednesday night, the Rangers defence was at its miserly best again today, and despite the visitors striking the post and forcing McGregor into a fine save late on, the game was played almost exclusively in the Dundee half of the pitch, something that particularly the Rangers Boss

‘It’s very important (not to concede) and the most important thing today is to show our willingness to win and our character in games.  We didn’t give many chances away, even at 3-0 we pressed really high and didn’t give them any space to play. We were very organised when we lost the ball.  The fullbacks were allowed some more freedom as we were only up against one striker and we had a lot of space in the sides but, when one fullback goes the others need to make sure we are organised in case we lose the ball.’

Not surprising that GVB has this sort of philosophy, after all he played in some of the best attacking sides in the World but, often being deployed in a more defensive role himself, he understands the importance of ‘defending from the front’ and the success of these teams was very often built on what they did WITHOUT the ball and pressing high.  This appears to be having an immediate impression on his current crop, with sponsors Man of the Match Joe Aribo, giving a little bit of insight to the changes made under the GVB regime.

‘He wants a lot of us running forward and ‘causing mayhem’.  When there are a lot of bodies in and around those areas it can cause confusion.  Every day we are improving and trying to show the manager what we can do, training has been very very good recently.  We’ve had to stick together recently and have got four massive victories by listening to the Manager and following his processes.’

The changes, whilst subtle, are already having a positive impact, in these early stages and Rangers now go into a tough December.  Having already negotiated two potential banana skins in the form of away games at Livingston and Hibs, trips to Tynecastle, Pittodrie and Celtic Park await the Light Blues in the coming weeks and with the squad returning to something resembling full strength, Rangers will need to call on all of their resources to come through this period unscathed.  It’s something that isn’t lost on Van Bronckhorst.

‘The squad is almost fully fit, which is important going into this busy period. It’s very important (to be able to rotate the squad) but, I’m also very pleased with the guys who came in.  Sakala had his first start and showed how dangerous he is in the one on ones in wide areas and he is always looking to score.  Giving minutes to Ryan Jack was also very important along with Scott Wright and Arfield.’

Of course the tough away fixtures aren’t the only obstacles that Rangers face this month, there is the small matter of Lyon away, up next in the Europa League and with the financial rewards to be gained from winning games at that level, it’s not something GVB is writing off, although he did admit to having one eye on a that huge encounter at Tynecastle next Sunday.

‘I generally only look from game to game but, we go to Lyon with the luxury of being able to think of next Sunday and being able to rotate.  I’m also confident, however, that the team that plays on Thursday can get a positive result.  This is a new starting point for all of them and I’m demanding these types of performances every game.’

So Rangers go into this next week, very much on a high.  This was a period that many, both inside and outside the Club, felt would test them to their absolute limit but, it’s ‘so far so good’.  They look a much more solid outfit to the one that shipped the opening goal to the opposition SIX times in a row prior to his arrival and, with players such as Barasic, Morelos and Goldson having something of a revival under the new regime, Rangers go into these matches full of confidence. There is a buzz about the place again, with many fans commenting that today was Rangers’ strongest performance of the season so far, however despite his positivity Gio is fully aware that stiffer tests are still to come and he signed off for a word of warning for his players.

‘We can still improve, you can never be fully satisfied, there were two moments in the first half where we gave the ball away during a build-up and then had to defend the counter.  We reacted well but these are moments that we need to improve on.  Likewise at the other end you want to create chances but you also need to score, only being 1-0 ahead wasn’t a true reflection of our dominance.’