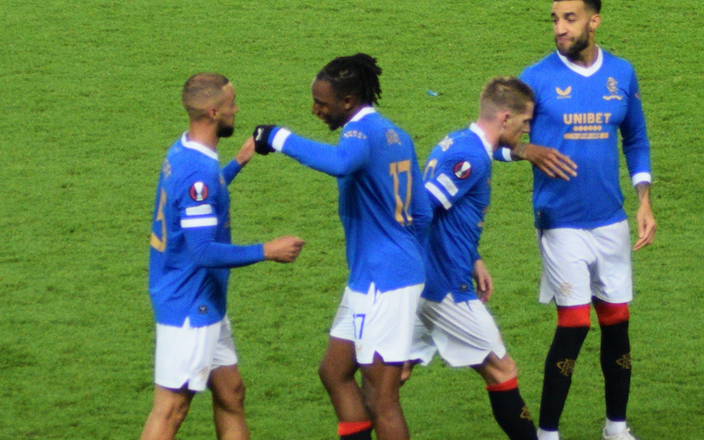 In his pre-match press conference, Steven Gerrard cited the significance of the double-header against Brondby in terms of his team’s ambitions to qualify for the knockout phase. He laid it on the line; he was looking for a minimum of four points if his side were to stay in the hunt for second place in Group A.

There were two changes in the home XI, one of which was enforced. Two yellow cards in the previous match in Prague meant a suspension for Glenn Kamara, so Steven Davis came in. And up front, Kemar Roofe was selected instead of Scott Wright. That meant the much-maligned Alfredo Morelos retained his place. Gerrard had been critical of the Colombian’s goal return this season but showed faith in him. A goal in this game would not only take Morelos to 100 in Rangers’ colours, but it would also be his thirtieth European goal in what was his sixtieth appearance at this level.

First impressions of the Brondby XI were how inexperienced their players were in European competition. Aside from Kevin Mensah (12), Mikael Uhre (15) and Andrija Pavlovic (52), no-one had made it into double figures in terms of appearances at this level. There was also a European debut for 38-year-old goalkeeper Thomas Mikkelsen, who replaced their regular custodian, Mads Hermansen who was injured.

The teams emerged with the Europa League anthem, a soundtrack composed by Michael Kadelbach, blaring out from the Ibrox sound system. However, the gathering of visiting fans in the corner between the Broomloan Road end and the Sandy Jardine stand held their yellow and blue scarves in the air and did their best to compete, exploding into song. Neither were any match for the home support, though, as they created a wonderful atmosphere that is typical of what the Stadium has experienced since the first European tie here in 1956. The tifo in the Broomloan Road stand was splendid too.

Despite being without an away win in any competition this season, Niels Frederiksen stuck with his favoured 3-5-2 formation, although one suspected that they may revert to 5-3-2 when Rangers were on the attack. Kitted out in all-yellow with blue sash, the Brondby players went into a huddle which met with the inevitable cacophony of boos from the home support.

Rangers, lining up in what looked like a 4-3-3 formation with Morelos central, Roofe on the left, and Hagi on the right, kicked off, attacking the Broomloan Road end. Yet it was Brondby that were first to threaten, bursting forward. The ball founds its way to number 11 Uhre, but he fired high and wide of Allan McGregor’s goal.

That sparked Rangers to life, and a great ball from Lundstram found Morelos. He squared the ball to Hagi who tried to pick out Roofe with a cute ball in behind. A sliding intervention cut that out, but another opening was carved out moments later, Morelos setting the ball back to Lundstram who initially couldn’t get his shot away. His eventual shot towards goal with his left foot was blocked, and a fine spell of pressure ended when Hagi fizzed an inviting delivery across the face of the goal but there were no takers.

The game then entered a scrappy spell, wherein the pace dropped and both teams were guilty of making loose passes. But out of nowhere, Rangers hit the front after 19 minutes.

Joe Aribo, who in the opinion of his manager ‘flexed his muscles’ throughout the game, had started well, and he worked the ball wide to Tavernier. The captain’s cross was charged down at the expense of the game’s first corner. As Tavernier stepped up to take it, objects looked to have been thrown from the section of the stadium housing the visiting fans. That sparked some tension between both sets of fans, but when that died down, Tavernier got his delivery spot on. Leon Balogun met it, rising eight yards out to bullet a header into the net for what was his first-ever goal for Rangers in European competition.

Ibrox was literally bouncing after the ball hit the net, and Rangers had a good spell afterwards. Each player showed a real hunger throughout the 90 minutes, and it was difficult to identify any one individual who had excelled more than any other.

But you don’t win your domestic title if you’re a poor team, and Brondby enjoyed their first real period of possession. And after 26 minutes, they should have been level. Uhre advanced down the left, and found his partner, Pavlovic, in space in front of goal. The Serbian, no stranger to Rangers having been in the Rapid Vienna team that lost 3-1 at Ibrox back in 2018 – should have hit the target but instead he scooped the ball over the bar.

That was a warning for Rangers, one the home side heeded as they doubled their advantage seven minutes later. Morelos was picked out by an excellent Hagi cross, but as the crowd rose in anticipation of goal number 100, the Colombian’s header was straight at goalkeeper. Mikkelsen didn’t hold onto the ball, and Roofe knocked in the rebound from a couple of yards out.

It initially looked like the goal had been ruled out when the offside flag was raised. In fairness, no one really complained as, on first look, Roofe appeared to be in an offside position. However, the referee, Fran Jovic from Croatia, elected to check with VAR, and after some consultation, he returned to the centre circle and signalled that the goal should stand. Remarkably, Roofe had been played onside by the left foot of one of the Brondby defenders. Fine margins indeed.

Rangers were now back on the front foot, Morelos shooting from range, but straight at the goalkeeper. He then tried to play in Tavernier but overhit his pass. And El Bufffalo was desperately unlucky on the stroke of half time when his shot from long range rebounded from the post.

It had been a breathless first half, one which Rangers dominated. But they were almost caught off-guard in the early minutes of the second half. Barely a minute had elapsed when a loose pass from Barisic was seized upon by the impressive Uhre. He advanced unchallenged towards goals but tugged his shot wide.

The visitors were getting a lot of joy down their left-hand side, with Kevin Mensah causing some anxious moments for Tavernier. After getting himself into a good position, his tame cross was easily pouched by McGregor. And after beating Tavernier again a couple of minutes, he looked set to create a goalscoring chance until he was squeezed out by Goldson.

Rangers hadn’t got out of the blocks yet but should have been awarded a penalty kick after 56 minutes. Aribo tried to get between a couple of defenders on the right-hand side of the box and went down when challenged. But nothing was given, and there was no referral to VAR either. Steven Gerrard said after the match that he is a fan of the use of technology like VAR, but he couldn’t fathom why it wasn’t used on this occasion. For him it was a stonewall penalty, and over 45,000 fans inside Ibrox agreed with the manager’s assessment.

By now Rangers had settled down again, and Barisic should have done better than fire in a wild shot when he was well-placed. That was exasperating, and there was a blow just beyond the hour mark when after a spell of treatment, Balogun, who had enjoyed a solid game, was replaced by Calvin Bassey. With Filip Helander injured long term and Nikola Katic on loan back in Croatia, it is to be hoped that the Nigerian’s injury isn’t too bad. He will be a significant loss to the team if he must have a spell on the sidelines.

Brondby made changes at this point too, rather bizarrely removing two of their more prominent players, Mensah and Uhre. Their coach denied that this alteration was made with one eye on their vital Danish Superliga match at the weekend against FC Copenhagen, but with the possibility of a single goal from them unnerving Rangers and bringing them back into contention, it was a perplexing decision.

After Gammelby fired recklessly wide at the back post, you could sense the crowd becoming a little unsettled. Morelos had an opportunity to quell any nerves, though, when he found himself in space outside the box. His weak shot was smothered by Mikkelsen, and it was his last action as he was replaced by Fashion Sakala a couple of minutes later. Goal number 100 therefore remains elusive, but this was a better performance from Morelos. More of the same would mean that that landmark will be reached sooner rather than later.

The change saw Roofe take up a more central position with Sakala wide on the right. The Zambian was serenaded by the fans to the tune of ‘Waka Waka (This Time for Africa)’, the official song of the 2010 FIFA World Cup, and he had a good opportunity to make the game safe when he burst clear with nine minutes remaining. He took perhaps one touch too many, though, and Mikkelsen made the save.

That incident came a few minutes after Gerrard made a triple change. Arfield, Wright and Bacuna were introduced, with Roofe, Hagi and the excellent Lundstram withdrawn. The latter once again strolled through the game, often dictating the pace of the play. On recent evidence, his signing is a shrewd piece of business.

And within a couple of minutes, two of those subs almost conjured up the third goal. Scott Wright found Scott Arfield, and the latter whipped a shot towards goal that bounced off the bar.

That was the last real action of the evening, as the game petered out. The only moments of note in the closing stages were weak efforts from distance by Tavernier and Aribo, with tiredness a factor for Aribo no doubt given the superb shift he had put in.

The attendance was recorded as 46,842, but there won’t be that many at the match in Denmark in two weeks time. Brøndby Stadium has a capacity of 29,000, but it is still likely to be bouncing if the performance of the Brondby fans at Ibrox is anything to go by.

However, although the Danes have been better at home this season, there is no reason why Rangers can’t make it six points out of six and in so doing really ignite their Europa League hopes. Aside from a couple of decent openings, Brondby rarely troubled Allan McGregor and it could be argued that Rangers should really have won this game even more convincingly.

But the most important thing was winning the game. And with Sparta Prague losing a seven-goal thriller against Lyon, Rangers’ journey to the knockout stages is firmly back on track.