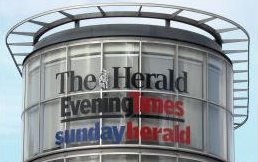 The dreadful Sunday Herald newspaper is enveloped by more chaos than usual.  And the failing publication’s latest woes seem to be because of a row the Separatist supporting paper is involved in with the SNP.

At the centre of the rumpus is hard line separatist supporting editor Neil MacKay, who hasn’t be seen in the office for the past few weeks and who has gone quiet on Twitter since 19th May, adding to conjecture that the quasi official explanation for his absence, a stress related illness, may be a smokescreen.

Also involved is the paper’s controversial and inexperienced news editor, Angela Haggerty, who is seen as Mackay’s pet protégé.

Haggerty has supposedly been referred to the HR Department after a twitter spat during which she outed the gay partner of SNP MP Mhairi Black over the weekend of 12/13th May.   MacKay had spent the previous week under heavy criticism from the Yes movement following the publication of a front page story – his attempts to defend the paper in the 13th May edition drove the Yessers to new heights of abuse, despite the fact that MacKay is such a well-known supporter of the SNP.

Haggerty was appointed News Editor over the heads of far more experienced candidates (having spent a couple of years working in the office of fringe nationalist group Common Weal and having edited two books for the infamous racist and sectarian scribbler Phil MacGiollabhain.)

Haggerty’s Twitter behaviour in outing Black’s partner, broke every journalistic rule and convention.   This, is of course, what you get when you appoint an inexperienced person to a high-profile and responsible job.

MacKay previously supported Haggerty when she was removed from writing a Sunday Herald column by editor-in-chief Magnus Llewellin over support for Graham Spiers – Spiers had made untrue allegations about a Rangers director, apologised and then attempted to renege on his apology. Spiers was of course booted out of the Herald for his unprofessional behaviour.

Now it remains to be seen if Haggerty will eventually finally follow him out of the door, or whether the Herald will turn a blind eye to her unprofessional behaviour.

Much will depend on what happens to MacKay and just how keen an interest in these events is taken by management.